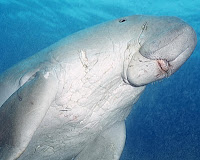 
'Henceforth I thought of it as a beast no more. I imagined the thing before me was in fact a stranger, simply a person from another land. People from this land favor a prostrate position rather than to sit or stand, I decided.
'They also do not appear as myself or anyone whom I know. The language of this person was unknown to me; however, we understood each other through instinct. Lastly, I decided that this stranger whom I was receiving in my quarters was, in fact, a lady...
'The creaking of the ship's timbers began to evoke a strange sonata in my head. I slid to the floor... As I neared, her eyes looked into mine once...then again...and then once more! Mine own eyes were wild with exultation.
'Finally, my will overcame my cowardice and I addressed her, my voice cracking and affected with emotion, "Do you wish to possess my love this night, my lady?"....
For more see 'Lost Sea Captain's Diary Tells of Encounter with 'Mermaid',by Peter_Otool at
http://www.spooftimes.com/NewsDetail.aspx?articleId=9801737b-19dc-4eae-9e00-a64a7b91d064&AspxAutoDetectCookieSupport=1
Posted by Dr Jo Stanley, FRHistS. at 22:05