Two US women and their partners have been kidnapped from their yacht s/v Quest by Somali pirates. Jean and Scott Adam of Los Angeles are named; the other couple aboard have not yet been named. Jean is a retired dentist interested in biological sciences.

They were hijacked in the Indian Ocean off the Somali coast, yesterday (Friday).The Los Angeles Times says that Jean and Scott distribute Bibles internationally.So how is this Christian philanthropy going to go down with the Somali pirates, who tend to be Moslem?

Mariners such as the Adams have been repeatedly told to stay out of pirates' range. Did the Adams believe God was on their side, or did they not need warnings?

The Adams have been sailing around the world since 2004 and had planned to do so for eight to ten years. This winter they were travelling from India to the Mediterranean via the Arabian and Red seas. They had been planning to make Crete by April, before sailing on to Istanbul, according to their website, www.svquest.com.

The issue here is not gender or religion but simply global inequalities of wealth. Piracy arises because men - young poor men in underdeveloped countries - seek this way out of poverty. Anyone - however innocuous, and female or not - can be a victim.

Recent estimates were that about 29 ships and 660 hostages are being held by pirates. There is already a 20-month, EU-funded anti-piracy programmes in place, which includes a digital fingerprint identification system. At least 100 Somali pirates are in custody in Kenya and the Seychelles.

Tunbridge Wells couple Rachel and Paul Chandler were similarly kidnapped by pirates and only released last November (2010). After a year of captivity, a ransom of over £500,000 was paid. Piracy experts warned then that paying ransoms would only encourage more hijackings. It seems they were right.
Posted by Dr Jo Stanley, FRHistS. at 02:53 No comments: 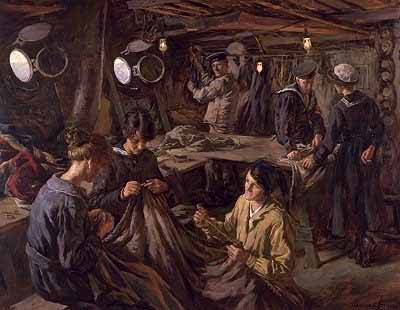 As part of the programme of events marking International Women’s Day, writer on gender and the sea, Dr Jo Stanley will reveal the women’s side of seafaring in the First and Second World Wars. Women’s crucial kit included thimbles and baby’s feeding bottles, not guns and compasses. Their concerns were where to dry those nappies and how to deal with amorous shipmates, rather than how to attack that enemy vessel or what course to steer to that foreign port.
Posted by Dr Jo Stanley, FRHistS. at 04:29 No comments: