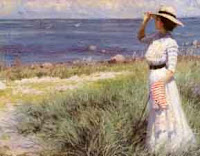 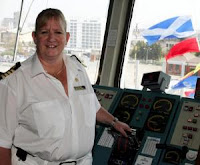 From shore to bridge, outsider to 'Master'.

Marianna Massa has written a useful on-line article about why it is crucial that not just women but gender should be central in writing about maritime history.
'Making the Marginal the Pivotal: The importance of writing maritime history from a "gender perspective"’
is in the online journal (anyone can access it)Blue Stocking. http://blue-stocking.org.uk/2013/03/03/making-the-marginal-the-pivotal-the-importance-of-writing-maritime-history-from-a-gender-perspective

She argues:
'Women have been the ones left behind on the shore looking wistfully at the ocean wondering when their husband will reappear on the horizon; always the supporter of a son’s or a husband’s ambition rather than the pursuer of her own life.
'There are accounts of exceptional women who have ‘set sail’ that aim to challenge this assumption, however, that is exactly what they are: exceptions. A lack of data on women at sea in their various capacities highlights the need for grounded, contextualised analysis in order to deduce patterns in women’s behaviours and their relationship with the sea.
'There cannot be one hegemonic literature regarding maritime history. As Simone de Beauvoir points out, the "othering" of women "tends to cast suspicion upon all the justifications that men have been able to provide for it, because it has not accounted for differences in experience."
'Applying a gender perspective engages women’s histories with the histories written by men and about men. It moves women away from the periphery in order to make a more whole and complete history.
'Applying the category of gender not only reveals women’s relationships with the sea, but also their relationship with men, as a constructed feminine being. It unites the land with the sea, and confronts the hierarchical relations amongst men, women, and different races.'

Marianne is right. At the moment I'm interviewing seafaring women pioneers who sailed from the early 1970s.
These women engineers, deck officers, 'floatographers' and pursers weren't waiting politely and prettily on shore for any male relative to return - and then go off again leaving the ladies to pine.
They decided they wanted to sail. Despite all the odds - including careers teachers who said it was impossible and employers who suggested would-be captains should instead become ship's nurses - sail they did.
Women seafarers were enabled partly because of the equal opportunities climate and legislation that were a product of the Women's Liberation Movement. They sailed despite an 'othering' reception along the lines of 'What's a nice girl like you doing on a ship like this (and in boiler suit too)?'
It's clear that their struggle and progression in a maritime career were crucially affected by gendered attitudes and a hierarchy in which women were lesser, other and seen as 'matter out of place.' Many women didn't necessarily recognise these deep gendered currents were going on, and were unfair and inappropriate.
The 'constructed feminine beings' to whom I've been listening with such fascination these last few weeks negotiated a path determined by many factors.
Some were helped by generous male mentors in shipping offices who, as fathers of competent daughters, believed women should have a fair chance at a maritime career.
At times on ships some faced hostile officers who flung missiles at them, groped them, mistrusted their abilities (until proven very wrong), undermined their authority, and with mistaken kindness put up Playgirl posters of studs like Burt Lancaster so that women too could have pin-ups on the workplace bulkheads.
Seagoing women's stories reveal ships as places where 'Woman' was considered to be irrelevant, intruding, and unsuitable. And then real women who pulled their weight and could do their job came to be valued.
Some male shipmates were able to generously say that their ships were far better places when women shared in the daily running. And some women felt a sense of victory when at last their gender was disregarded; the point was that they were seafaring workers who were just very good indeed at doing their job.
I'll be trying to show this in my next book, From Cabin 'Boys' to Captains: A history of women at sea, History Press, 2015.
Posted by Dr Jo Stanley, FRHistS. at 23:17 No comments: 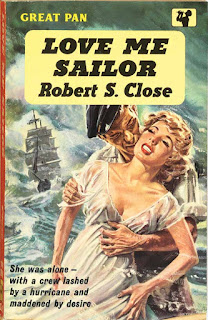 Robert S Close's 1945 novel, Love Me Sailor, was banned in his native Australia and the writer imprisoned for writing something so obscene. It was a sort of forerunner to the controversial Lady Chatterley's Lover. Most entries about the book on the web say things like 'Why on earth would it be banned? It's moderate by today's standards.'

20th century pulp novels are something seldom discussed in histories of maritime labour. But I've just read it because I think it may have been a formative book for young male seafarers in the 1950s. Something so iconic might have helped construct seafarers' sexist attitudes to women on board.

That impact is yet to be explored. But after reading these 218 pages through my particular lens, what strikes me is:

1. the book's great literary merit. This is fine writing, especially about men's romantic idealised notions of women (Ern, the violin-playing Third Mate) versus butch Bill Hawkins, the Second, who just want to get into the solo woman passenger, Emma Miller.

2. that sex is so associated with violence and power. Almost everyone on board the Annabella is focused on 'rutting' Miss Miller as magnet/object. They all have different reasons, none of which include a desire for profound and equal communication.
It is as if her presence there is both a challenge and a taunt. She is 'matter out of place' (Woman on Man's territory)and therefore has to be punished and 'rutted' into a relegated place, back in order.

3. that sexual conquering seemed to be even higher priority than saving the (sailing) ship full of nitrate in a hurricane. Why did the writer suggests such unlikely prioritising?

4. that it is so binary: Emma Miller entirely loses her charm for the men the minute it's found out that she has gone 'all mad' (she was, it seems, always a bit 'mad', which means too sexy and anxious, the result of her father abusing her).
The final lines show that, after the storm is successfully survived, thanks to Bill's toughness, this once-alluring figure is bundled off the ship onto a steam ship that will take away her polluting presence. The once-temptress is now just in a makeshift strait jacket tied with curtain wire: 'Furled in the grey blanket, she looked as stupid as a booby bird in its next...[we] looked at her ...then we moved away from her. We went over to the rail and spat.'
Insanely penetration-focused men, it seems, only want partners who are certified sane and also desire-less.

On reflection I wonder if Close (who was himself at sea) wrote this as an exploration of emotions at sea? Or a critique of machismo in a place (an old-fashioned sail ship, not a namby-pamby steam vessel) where the ultimate rugged masculinity rules and where the most Alpha male inevitably gets to be top man? After all, Bill (who was fond of young Ern) smashes Ern's violin after his death, ie he tries to symbolically banish this token of tenderness and 'civilisation'.

Or is just literary porn-come-derring-do?