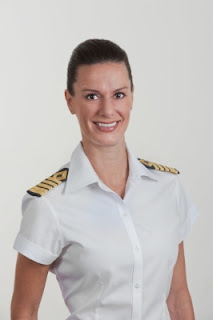 One of the best things about exploring mountains of information about the way women have progressed in maritime history is that I know when feats are mega-feats, par-for-the-course, or odd. Comparisons can be illuminating.

So when today Celebrity Cruises announced their first woman captain, Kate McCue, it's very interesting to see where she fits in two contexts: women cruise ship captains all over the world, and US women captains.

(This information is extracted from my forthcoming history of women at sea:
From Cabin 'Boys' to Captains. It's being published by the History Press, April 2016. There's a whole chapter on women breaking through into deck work, including the first women captains.)

Kate McCue is one of several illustrious women who have finally been allowed to captain huge cruise ships, since 2003. Some cruise ships captained by women are twice the size of hers; many go worldwide, not only the US's east coast, as she will be doing.
She is the successor of women masters who began sailing in the 1830s. Women really broke through in the 1930s in a small way, and then more routinely from the 1970s following anti-discrimination legislation.
The US Navy has been allowing women in command (of small warships) for a decade, so Captain McCue's feat is surprisingly late in US history. However, she has risen to this height relatively quickly, after only fifteen years. 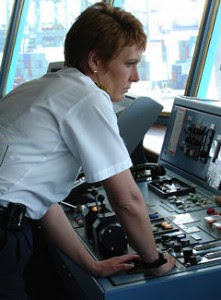 Lots of 'firsts' were claimed, in women's maritime history, I've found. Maybe communications weren't good enough to allow for checking and corroboration.
Possibly the first certificated US captain was was Ivy Wambolt (1910-1976)
Captain Ivy commented to a newspaper that ‘It was natural for me to go to sea … my father and my brothers all went … Following the sea is much more exciting than sitting at a pokey old desk. I get to go places, see things, and know that my ship is my own … I don’t see how it is unusual for a girl to be a captain. It happens to be my job.’
Ivy was followed by Molly Kool in 1939.

Worldwide pioneering woman captains
Worldwide, women have been captains since at least the 1830s. Some weren't certified, because formal qualifications, rather than experience, weren't initially required. The first woman captain on record in Western history is Betsy Miller,(1792-1864). Master of the Cloetus or Cletis, a 197-ton brig taking timber from Ardossan to Belfast, Dublin and Cork, she was from Saltcoats, Ayrshire, in Scotland.
Women in the early days, and they were rare, almost always rose to these heights because their family owned ships and had trained the woman to handle them. The women were known and trusted, and didn't initially do very long voyages.
They often got their opportunity because there was no-one else to help out in a crisis that would otherwise have ruined the family business.

"MIAMI, July 13, 2015 /PRNewswire/ -- For the first time in the cruise industry – and in Celebrity Cruises' history – an American female will take the helm of a mega-ton cruise ship. At 37 years of age, San Francisco native Kate McCue will command Celebrity Summit– a 91,000-ton, 965-foot ship in the Celebrity Cruises fleet, sailing between the eastern United States and Bermuda. As Captain, she will be responsible for the safe navigation of the ship and the onboard experience of its 2,158 guests and 952 crew members.

Career path
"The modern luxury cruise brand, which operates a fleet of 10 ships, has elevated McCue to the position of Captain based on her 15 years of successful experience and leadership in the maritime industry.
"During her tenure, McCue has managed ship logistics while sailing worldwide itineraries, including Europe, Asia, Australia, the Caribbean, the Pacific Northwest and Alaska, and along the Panama Canal.
"Captain McCue has also served as a maritime leader while sailing several transatlantic and repositioning cruises, and played a notable role in the revitalization of ships in Singapore.
"A graduate of California State University's California Maritime Academy, Captain McCue has held a variety of roles in the maritime industry, beginning as a cadet and deck officer, then working through a series of successively more responsible positions to her most recent role as Master Mariner with Royal Caribbean International.
"McCue has earned numerous certifications in a variety of areas pertaining to leadership navigation, ship management and security.

Leading women in Celebrity Cruises
"Continuing Celebrity Cruises' dedication to advancing the role of women in leadership, Kate McCue's appointment follows that of Lisa Lutoff-Perlo, who was named President and CEO of Celebrity Cruises in December 2014.
"From the first time I met Kate, I looked forward to this moment, when I could extend my congratulations to her for being such a dynamic and highly respected leader who will continue to pave the way for women in the maritime industry," said Lutoff-Perlo.
"Of all the great moments throughout my career, this is at the top of my list. I am both honored that Kate accepted this position, and proud of the way our team continues to transform the way people think about Celebrity, and about cruising in general."

How Kate McCue sees it:
"Becoming the first female American captain of a cruise ship has been a goal of mine for as long as I can remember," says McCue. "The honor is amplified by being the first at a company like Celebrity Cruises.
"The cruise industry is ever-evolving, from the ships and the itineraries, to our guests' expectations for vacation experiences. Celebrity has a history of delivering on each of these and I am thrilled to be a part of it.
"I look forward to working with an amazing team and the exceptional leadership who bring the Celebrity Cruises vision to life every day."

McCue will begin her new role on Celebrity Summit in August 2015.
http://www.prnewswire.com/news-releases/kate-mccue-advances-womens-leadership-in-cruising-as-celebrity-cruises-names-her-the-industrys-first-ever-american-female-captain-300111992.html
Posted by Dr Jo Stanley, FRHistS. at 22:33 No comments:

Rozelle Raynes: she was there, and she wrote about it 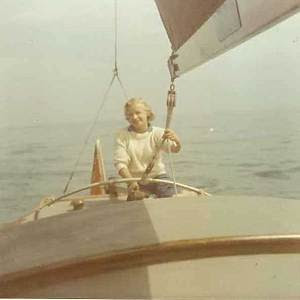 Rozelle Raynes, a former Wren Stoker in WW2, and later a Merchant Navy assistant purser, died on June 22, age 89. Her most famous book was Maid Matelot: Adventures of a Wren Stoker in World War II (1971).
Obituaries appeared in the Times http://www.thetimes.co.uk/tto/opinion/obituaries/article4482431.ece and Telegraph. http://www.telegraph.co.uk/news/obituaries/11701557/Lady-Rozelle-Raynes-Wren-stoker-obituary.html
So I won't repeat details here. I will simply comment that from my perspective, as someone who knows womens' Merchant Navy and Royal Navy history), Rozelle exemplified three key trends in women's maritime history. 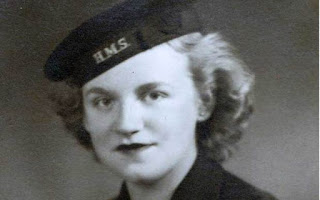 1.Posh gels in mucky jobs
Born in 1925 she enjoyed the war in one of the most highly-desired WW2 Women's Royal Naval Service jobs - working on small boats where about 300 women showed great mechanical prowess and even maritime passion. And she was one of the many aristocratic Boats Crew Wrens who did not, in any way, act grand; Lady Frederica Rozelle Ridgway Pierrepont's fingers were as begrimed as anyone else's and she was always democratic in her friendships.

2. A prize for commercial shipping - and a pioneer
She was one of the many Wrens whose WW2 experience of life in naval service enhanced their taste for the sealife to such an extent that they tried to join the Merchant Navy afterwards (You could work at sea in the MN, but not in the RN) at that time.
Like Elizabeth Sayer, the most famous pioneering ex-Wren who became a purser in 1947, Rozelle was snapped up by a company keen to employ staff who'd had all that excellent WRNS training, including informal training in socialising well, surviving happily far from home, and coping with being in situations where men outnumbered women by as much as a hundred to one. In the 1960s she was one of the early women assistant pursers on Townsend ferries , crossing between Dover and Calais.

3. Hooked! A boatie forever
Wartime WRNS service seemed to turn many women towards enjoying recreation on small boats, including long and risk-taking voyages after the war. In From Rudders to Udders Jane Taylor, Rozelle's contemporary, describes lived on a floating shop-gas station on the Hamble. She later went on become master of a ferry. Rozelle did a single-handed yachtswoman who did epic voyages and wrote about them. 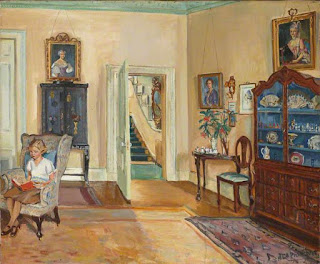 Painting of Rozelle as a girl, by her mother. © The Stonebridge Trust, The Pierrepont Collection. It can be seen at what was once her ancestral home, Thoresby, Notts.
A beacon and the best of avatars</
A few score more of her remarkable sort may still be alive (and slowly, sadly giving up their boating). But no-one celebrated that life in print as Rozelle did. Her articles then books kept alive that culture of women's avid post-1940s seafaring. She inspired sea-mindedness in countless others who didn't have that WRNS experience (but would like to have had it),decades before yachtswomen Clare Frances and Ellen MacArthur.
For me Rozelle Raynes is the best woman writer about seafaring of her period. No-one matches her. If the small and disparate world of women seafarers gave out medals she would certainly have been awarded the highest and shiniest one For Enabling Women to Access Seafaring. She showed girls and women the sea was a place open to women, which they could approach with agency and enjoy with verve.
Posted by Dr Jo Stanley, FRHistS. at 10:51 No comments: