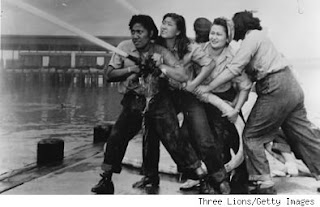 On the 70th anniversary of the Japanese attack on Pearl Harbour on Dec 7 19141, a few stories are emerging about US women. At the huge US naval base there were many civilian wives. There were also women working in supprt roles, such as the 82 Army and 42 Navy nurses. Annie Fox (48) (pictured) the chief nurse in the Army Nurse Corps at Hickam Field, later received a Bronze Star for bravery after the attack.

The photo shows women there putting out a fire that day.

Women were not working on ships, but their lives were very ship-focused. And civilian wives of men in the US Pacific Fleet took to the seas because they were evacuated - in Beatrice Thacher's case on an unsuitable vessel.

Mary Jane Smetanka writes in Minneapolis Star Tribune that then-teacher Beatrice Thacher, now 95, was in Hawaii raising a 2-year-old and was pregnant with her second child. Her husband Bob was a gunnery officer in charge of the anti-aircraft battery on the battleship California.

'"I loved that battleship; it was always breaking down," Bea Thacher said with a smile. That meant the ship often had to come back to port for repairs, and she got to spend time with her husband."'

The Pacific Fleet had been ordered to Hawaii because of fears of war with Japan. 'Most Navy wives stayed on the mainland, but as Thacher ... vowed to join her husband on the island of Hawaii.'

'She had sailed there on a tourist ship, and said she spent the entire trip chasing her 2-year-old, Carol, around the ship deck...The couple found lodging in a run-down cul-de-sac crowded with Navy families. The landlord was a woman who mothered the young Navy wives, who saw their husbands only when they were off-duty.'

After the attack early on Sunday morning 'Bea wandered up the cul-de-sac and found other wives listening to the radio, playing bridge and drinking coffee. As she mechanically rigged a blanket to cover a window, she began to tremble."... was shaking so bad I bit on the blanket to stop my teeth from chattering."

'The Navy evacuated families to the mainland. She boarded a ship not knowing where it was going.

'The ship rolled in the waves because it didn't have enough ballast.. anxiety swept over those on board when the little fleet it was part of had to pause in the Pacific to deal with engine problems in one boat.

'Japanese submarines were thought to be in the area. Bea was wearing an old tweed coat that a friend of Bob's had handed her before she left.

'Bea didn't see Pearl Harbor until six weeks after the bombing...[she] spent the rest of the war years in New Jersey, dashing to New York to see Bob for an hour when his ship docked and he left for other assignments."I just missed him so much," she said. "I was dying to see him. It would be in on a Friday, out on a Monday."' http://www.grandforksherald.com/event/article/id/223261/group/homepage/Published December 07, 2011, 08:46 AM

Donna Trussel writes in Politics Today that 'During and after the Pearl Harbor attacks, 57 civilians were killed and 35 were wounded. (Estimates vary on how many of those deaths resulted from friendly fire.) The military deaths, by comparison, were 2,402, and 1,247 wounded... all the women (and children) casualties were civilians.
http://www.politicsdaily.com/2010/12/07/remembering-the-women-at-pearl-harbor-on-december-7-1941/
Posted by Dr Jo Stanley, FRHistS. at 11:53