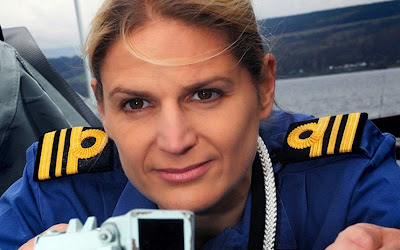 This weekend one pioneering woman's new relationship (and that's "relationship" with a question mark after it, nothing's proven) has gone viral.
Or rather it's gone as viral-ish as is possible given that her employers have issued only three sentences about it.
A Royal Navy spokesperson said of Commander Sarah West, the first woman commander of any major Royal Navy battleship: "We are aware of an allegation of a breach of the code of social conduct on board HMS Portland, which we are treating seriously.
"Anyone who is found to fall short of the Royal Navy's high standards can expect to face appropriate action. It would be inappropriate to comment further."
Commander West, 42, from Isleworth, has had to leave her vessel, a Type 23 frigate, because it's been claimed she's had an affair with someone else on board.

Officers are allowed to have relationships if:
~ they don't undermine 'trust and cohesion'
~ They don't damage operational effectiveness

What now?
The next step will be for her superiors to discern whether this has happened: a kind of inquiry.
If 'found guilty' Commander West will face a range of moves including:
~ formal warning
~ reassignment to other duties
~ the end of her service
Implicitly media speculation is "Will she lose her job with ignominy and scandal?" 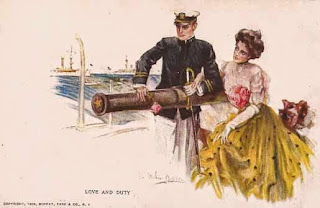 Once (shore) women were seen be a force that could distract seafarers from their duty and career.


Taken to be symptomatic?
The problem is that any publicity about this gives fuel to reactionary arguments along the lines of "See. We told you. Putting women on ships can only lead to one thing. Illicit sex. Even women at the top succumb. Keep 'em ashore."
Merchant navy women have been becoming deck officers since the 1970s, against the odds. In interviewing them for my current book they repeatedly talk about the strain of knowing that if they make a slip - indeed, if they do almost anything - then ALL women in their position are judged by that.
When women seafarers - who are now 13 per cent of the merchant navy - do something not quite right it's never seen as simply an individual's one-off action, as it would be if a man had done it. No-one says "See! That proves all men of 35 with grey eyes and a mole on their left shoulder shouldn't work at sea at all." Instead people would just shrug:"Oh, Geoff's slipped up on this one."
By contrast, a woman's action is still taken as irrefutable proof of one gender's intrinsic unsuitability for sea work. Ever. And as for someone in command being fallible...!
Women seafarers - and most pioneers doing "men's" jobs - find they are critiqued earlier, and for far more minor infringements, then men. Critics lurk, waiting for failure, so that they can argue that the old gender imbalance (men in charge/women in support) needs restoring.
Can it be rivalry and deep insecurities about gender that motivate people who grass up a shipmate? What are they doing causing trouble in that tiny space where solidarity is so crucial - and so tricky?

An old objection
Sarah West's situation, as represented, is not only typical of attitudes towards women working on ships in general.
The story of sexual activity as a hot issue on royal and merchant navy ships is hundreds of years old. For centuries it's been argued that having women aboard brings trouble, including rivalry about who has sexual access to whom.

In fact, it is gendered attitudes towards women and towards sex that are the problem. It's not a problem that women per se are on board.

The royal navy dealt with it by, at times, only allowing women (variously 'good' wives and 'bad' sex industry workers) on board a ship if it was in port, not sailing. Or turning a blind eye to women's existence.
And sexual activity on RN ships was always controversial. Nineteenth century opponents argued on the hand that the Admiralty was allowing the navy to be "brothelized". But permissive commanders contended that if you didn't allow press-ganged men their 'recreation' they'd mutiny.
Nobody's sure how much homosexual sex really occurred and if it really did sap morals.


Clearly sex on ships is a subject that needs thorough, wise, and un-bigoted airing.


The merchant navy's past attitudes towards sex on ships has included only employing mature and motherly-looking women, preferably wives of men already employed aboard. Some shipping line personnel officers deliberately rostered camp gay males as cabin stewards, on the grounds that then women passengers wouldn't be bothered by heterosexual advances from crew.
People keep relationships secret, certainly from head offices ashore. When found out, it was usually the case that the woman, not the man, was moved to another ship. She was quietly seen as the more culpable one.
Women today on merchant ships often deliberately chose not to have relationships with shipmates because it's too difficult. It's too gossiped-about; the team tensions it can cause are tedious, especially if you break up in mid-voyage; and if you then take up with another partner on that same voyage you can be branded as slag and traitor.

When women were allowed to sail in RN ships from 1990, some naval wives protested that adultery would inevitably ensue. Ex-Wrens told me most heatedly that of course there would be trouble: in a tin box full of testosterone-fuelled young men, rampant sex must be the outcome.
The women sailors themselves replied 'Eh? Why? We've already got our own partners already, ashore, actually.' And among the 3,150 in today's navy (9 per cent) a number of women on ships have relationships with each other.
Cartoonist Smiles(the late Charles Smiles) made the implicit point (see cartoon below)that when women sailors were revealed to have agency and be actively desirous it changed the position of male sailors as the more powerful, knowing gender on the ship.

CAPTION: "They have to go through your [the women's] messdeck and they might see the pinups!" Cartoon by Smiles, Navy News, Nov 1990

As part of the preparation for writing my next book, on women and the Royal Navy, I've been collecting newspaper cuttings on cases of women sailors who've come up against male shipmates' sexualised and discriminatory attitudes.
Given the RN's impressive record of struggling to be a truly equal opportunities employer it would be invidious to list these. I'll just say that included in that picture are cases of rape (which are dealt with very firmly), but also a very noticeable decline in stories about sexist behaviour these days. Even tabloids can't find stories of the 'HMS Lusty' kind.
The RN's record of good gender discrimination policies - and policies firmly enforced - is much better than the MN's. And women officers appear to be well-respected. I don't believe this picture is just a matter of better silencing of accounts of discrimination. It's real.
But old attitudes towards women and their sexual activity take much uprooting.

So...
It's no fluke that in the weekend newspapers there's another gender-related story along with Sarah West's: the Archbishop of Canterbury's letter to the Pope acknowledging that the recent vote supporting the ordination of women bishops is a problem (but urging that it not be).

Religious life is simply another key area where we see that major, male-led, institutions are troubled by the idea of women having power - and behaving differently. Gender divisions are still a problem. But decades of solid evidence proves that gender does not have to be an obstacle on ships.

As male masters in both navies repeatedly agree after they've had real experience of women working on board, most women are assets to be prized for their diligence, creative problem-solving and team-bonding skills.
Once-sceptical WW2 officers enthusiastically asked for more Wrens, not fewer, when they'd seen the usefulness of the Real McCoy.
Post-1970s MN masters repeatedly say that women can be even better seafarers than men.
They are a precious resource and that was recognised by the RN in 1997 when it first employed women commanders for ships, to some shock.
See Smiles' cartoon below, Navy News, March 1998:
"Hey Chief! There's a lady in the skipper's cabin!" "You're right on both counts, my flower!" 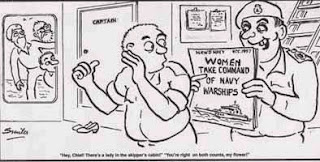 So what if some people sometimes have on-board affairs.
In both navies attitudes towards on-board relationships may yet take a few more decades to sort out. But why waste good personnel over trivial matters?
And when ever did a male commander get ditched because he loved unwisely?
I can think of two appropriate adages.
1. Let good people get on with doing their jobs.
2. And judge everyone on their own merits, not on supposed gender characteristics. This matter must not lead to the Navy hesitating over appointing more women to positions of command.
Posted by Dr Jo Stanley, FRHistS. at 07:29