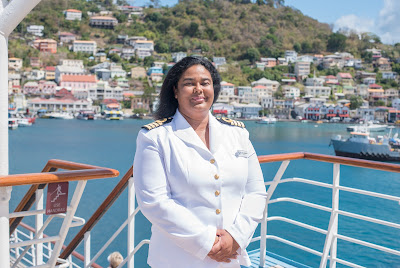 Today a Southampton woman, Belinda Bennett, became the first black woman captain in the cruise industry. Captain of the Windstar, she joins the handful of pathbreakers who have become captains of cruise ships since 2007.
‘“Having been with Windstar for the past 11 years, I couldn’t be more honored to serve as Captain with such a respected and hard-working team,” said Bennett. “Earning this title has been a long and exciting professional journey.”’

Windstar wrote:
“We are thrilled to have appointed Belinda as Windstar’s first-ever female Captain and we understand may be the cruise industry’s first-ever black Captain,” said Hans Birkholz, Windstar Cruises’ chief executive officer.
“She has earned her spot at the helm and I’m excited to see her in action, guiding the crew and our guests on Wind Star through some of the world’s most incredible destinations for years to come.”
‘Hailing originally from St. Helena – a part of the British Overseas Territory, encompassing Ascension and Tristan da Cunha islands – Bennett naturally became immersed with life at sea, having started as a Deck Cadet at age 17 on her home island ship the RMS St. Helena.
‘Just four years later, she climbed the ranks as Third Officer and ultimately stayed on board for an additional five years, until departing in 2003 as Second Officer.
'Following a brief stretch as Chief Officer for the SS Delphine, a private charter yacht, and Isle of Man Steam Packet ferries, Bennett joined Windstar Cruises as Second Officer at the Port of Monaco in September 2005.
‘Bennett worked on a variety of Windstar Cruises ships over her 11-year career with the small ship luxury line, transitioning to chief officer and now captain.

KEY QUESTIONS
1. What did you want to be when you were little?
I wanted to be a marine biologist in my younger years. I guess I always had a passion for the sea!

2.What qualities must someone possess to become a good cruise ship captain?
You have to be a good communicator – able to both talk and listen. You also need to be visible to both guests and the crew.

3.What are your favorite ports-of-call and why?
I so love the Dalmatian coast. The Croatian coastline and ports are beautiful! And for anyone who has sailed with me, they know I have a particular affinity for Sorrento in Italy, where I have a personal traditional of buying Italian leather handbags. You’ll notice the word “handbags” is plural.
http://blog.windstarcruises.com/2016/03/diversity-sails-forward-introducing-captain-belinda-bennett-windstars-first-black-female-ships-master 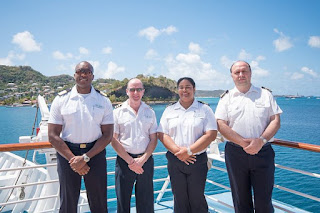 BELINDA'S HISTORIC PREDECESSORS
An illustrated summary of the modern pioneering women captains can be found here:http://maritimeolympiad.com/women-at-sea.

But women captains on all sorts of ships do have an earlier history, from Betsy Miller in the 1860s. Tellingly, few were black or even mixed race until the last few years. (But that's as far as we know, from a western perspective. There will be other, African and Asian, stories.)
Want to know what it took to be a woman master in a man's world, in the past? Try my history book, From Cabin ‘Boys’ to Captains: 250 years of women at sea. www.thehistorypress.co.uk/publication/cabin-‘boys’-to-captains/9780752488783.