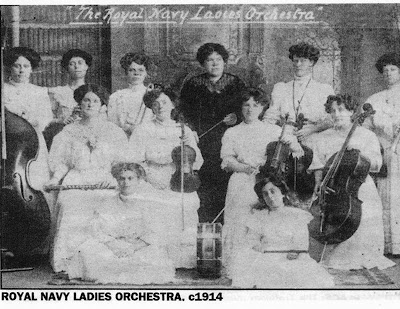 The Royal Navy Ladies Orchestra, 1892-c1914 is one of the lost stories of women's history in music and and in service life. It's possible to piece fragments of it together but really it requires a collective effort, if anyone would like to co-operate.

The Navy and Royal Marines had their own full-time professional musicians. But in addition, there seems to have been a separate, less integral musical initiative by pre-WW1 women: The Royal Navy Ladies Orchestra. They were probably women who were raising money for naval charities.


'Delightfully cerulean'
Generally they were well-received. The orchestra was applauded by one reviewer as ‘agreeable and diversified.’ By 1909 they were advertised as ‘Acknowledged to be the Finest Ladies' Band now before the Public. ‘ They belonged to the stately end of musical entertainment, not the bawdy cross-dressing music hall end. They didn’t wear a snappy version of a naval trousers but were ‘ladies in blue, who look delightfully cerulean’.

At piers and kursaals
The orchestra mainly played in the north, at end-of-pier events and charitable occasions. But it also appeared at august venues such as the Royal Albert Hall and Crystal Palace. In Europe after 1870 ladies orchestras proliferated, and were very popular, especially at kursaals, a stately equivalent of medical spas at watering places.
The RN Ladies Orchestra must have been up with the best because it played in Hamburg, Leipzig, and Dresden.
At the start of WW1 they were playing in Portsmouth and Worthing, perhaps as a way to boost recruitment and morale. On Worthing Pier that August 1914 they played every weekday and also gave 8.30pm promenade concerts to strollers on Monday, Wednesday and Saturday.

Members
It appears that there were usually at least eight members. Twelve are in this 1914 picture. Some were instrumentalists, such as cellist Winifred Parsons in October 1909. Vocalists included sopranos Miss Winnie Lincoln and Miss Elsie Raynor.

Their director was Miss Florence Sidney Jones (see pic), who later began calling herself Mme Flo Sidney. Reviewers praised her as ‘painstaking and capable’. She was the sister of James Sidney Jones, composer of musical comedies. Her address was Bellcare House in Leeds (Not findable). She sang a song in c1883 that James had composed. (see sheet music) 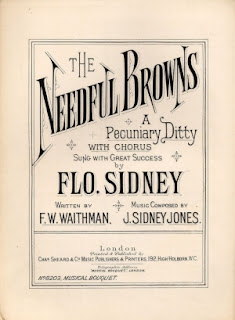 1860 & 70s: Flo must have grown up steeped in music. Her military father, James Sidney Jones senior (c1837–1914), was a military bandmaster and conductor. One of her other brothers Guy Sidney Jones (1875–1959) was a musical director and composer too. The family moved many times as their father was sent to new military stations such as Colchester, Aldershot, York, and Dublin before settling at Bellcare House in Leeds. There Flo’s father was conductor of the Leeds Rifles, musical director at the Grand Theatre and conductor of the Spa Orchestra at Harrogate.
1882: Flo’s brother James Sidney Jones junior travelled as a conductor of touring musical shows, which must have made it easier for Flo to later consider an itinerant musical career too. One of his stars was Lucy Carr-Shaw (1853-1920) (see picture), George Bernard Shaw’s sister, who may have encouraged Flo to become an independent thinker and New Woman. 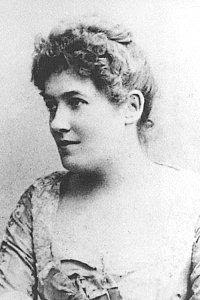 1883: James seems to have briefly taken responsibility for the orchestra initially.
1893: After his tour to Australia and when his West End career took off in 1893 it was Flo’s name that appeared everywhere in relation to the RN Ladies Orchestra, particularly in newspaper announcements of events, called ‘Provincial Theatricals’ in The Era.
By 1896 James Sidney Jones created The Geisha, ‘by far the biggest hit of that decade, its popularity outstripping everything else, even The Mikado, throughout Europe.’ The Gilbert& Sullivan-like show features naval officers and ‘the amorous goings-on when Lieutenant Reggie Fairfax and his fellow officers from HMS Turtle descend on 'The Tea-House of Ten Thousand Joys' in Japan, longing for a cup of tea and female company.’
It’s likely that Flo stayed with her wealthy brother James when in London. 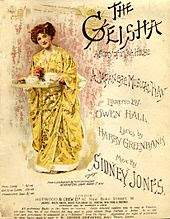