Singaporean women are turning to maritime engineering, reports Olivia Ho in today's Straits Times 14 August 2015 http://www.straitstimes.com/singapore/manpower/young-women-turning-the-tide-to-show-off-sea-legs)
World wide, women have been under-represented in enginering work on ships. In the UK they're less than one per cent, and some maritime colleages have no women at all doing their engineering courses some years.

Olivia tells a more positive story:
'"One should not think that seafaring is restricted to a man's world," Maritime and Port Authority of Singapore (MPA) chief executive Andrew Tan said at last month's Maritime Manpower Conference. In fact, more women are joining the industry, he added.
'An MPA spokesman said more than 20 Singaporean women obtained their first Certificate of Competency from 2011 to this year, up from about 11 from 2000 to 2010. The qualification is required for those working on ships.
At the Singapore Maritime Academy, female students make up 20 per cent of the Diploma in Marine Engineering cohort, up from 15 per cent in 2010. 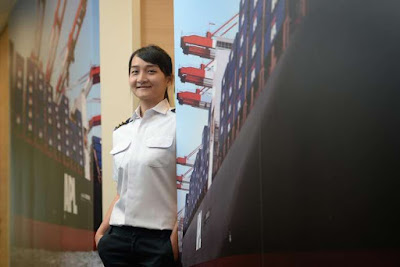 Engineering cadet Lim Pio Teo
'For Ms Lim Pio Teo, 27 [pictured above] becoming a maritime engineer was a chance to turn the excitement she felt as a child, when taking a ferry to Batam, into a career. "I have always liked the sea a lot. It calms and relaxes me," she said.
'Ms Lim, who first set sail in 2008, is now a second engineer with global shipping company APL, and said she hopes to work her way up to become the chief engineer of a vessel.
'Her 52-year-old father, who sells pork at a wet market, surprised her with his support when she told him of her career choice. She said: "When I drop by to help at the market during shore leave, he will always tell customers that this is the daughter who has gone sailing." 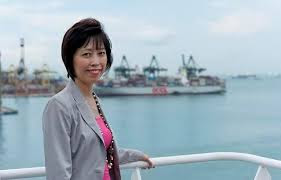 Family support helps women get on
'Singapore Maritime Officers' Union (SMOU) general secretary Mary Liew [pictured above, photo from SMOU] said family support is a key factor in getting more women to become seafarers. It is also important to fight close-minded attitudes among some bosses and colleagues.
'Ms Liew, who in 2013 became the first woman to helm the 64-year-old union, said: "A common mindset is that women are physically less able than men, so it may be unsuitable, or unsafe for them to be out at sea for months with a predominantly male crew.
'"It is a lack of understanding and awareness that gives rise to such misguided conceptions."
'SMOU's Tripartite Nautical Training Award, a place-and-train programme for naval officers that began in 2009, has started seeing female cadets in only the last two years. The first two were admitted last year, and the third, this year.

"I can do it too!"
'Ms Nurfaezah Ithnin, 24, was one of the two female cadets admitted last year. She left a bartending job last year to pursue what she felt were better career prospects at sea.
She said she was nervous when she boarded her first ship. Now on her second voyage, she said: "The only way to not be teased by the crew was to show them that I could do the same jobs. The crew knows to help only when I ask for it. Other than that, I can do it."'