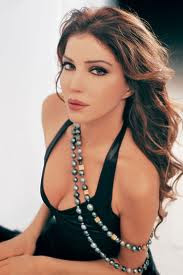 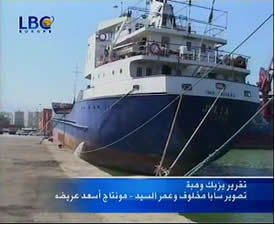 Today St Mariam, the all-woman Gaza aid ship is set to sail from Tripoli to Cyprus. It's the first leg of its voyage.

The ship carries medical instruments and medicines to help Palestinians suffering because of the Israeli blockade.

With its sister ship, Naji Alali, the St Mariam (meaning the Virgin Mary)had hoped to set off several weeks ago. It was delayed after Israel launched a diplomatic mission to pressure Lebanon to stop the mission.

Peace activist passengers include Lebanese singer May Hariri(see pic), US nuns,doctors, lawyers, journalists and a very pregnant woman, Serena Shim. Faiths include Muslim and Christians. Some have adopted the ship's name, Mariam.

The participants are aware of the dangers after the Israeli attack on the Mavi Marmara in May. Nine activists were killed.

Organiser Samar al-Haj says 'There will be no showers, no skirts and no makeup.' Food with be sparse and accommodation limited.

At a planning meeting Al-Haj reminded the women to be prepared for a confrontation. 'Have blood tests in case we come under attack from Israel and you need a blood transfusion.'

However, she made clear that organisers were going out of their way not to provoke Israel."We will not even bring cooking knives." Read more in Ruth Sherlock's article at http://www.guardian.co.uk/world/2010/aug/06/gaza-aid-flotilla-lebanon-women.

The ship has been termed 'feminist.' I can't quite see it as a sort of floating Greenham Common Peace Camp. Maybe it's meant in the biologically essentialist sense. That is, some women claim that women (as potential mothers)have a special aptitude for ensuring the human race continues, including through anti-war protests.

But any peace initiative is to be valued. And these women are not only brave but patient. They've been waiting for weeks in a Beirut hotel.

Rabid and stupid comments, apart from 'sink 'em' include naming the ship Pussies Galore. There are jokes about PMT and crabs. The silliest remark is 'Wait’ll the tampon and Midol-stealing starts. They will turn on each other and those "didn’t bring ‘em’ ‘cooking’ knives will come out."
Posted by Dr Jo Stanley, FRHistS. at 07:31 No comments:

Celebrating women in command at sea 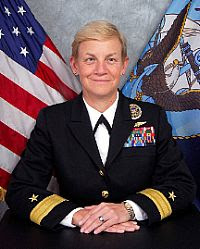 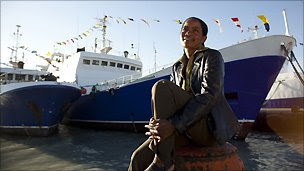 Two women have just got leading jobs at sea. I wish we could say "So what?"
But actually it is still a remarkable feat. So congratulations not only to to Johanna Kwedhi (lower pic)and Nora W Tyson (top pic) themselves, but those who've been brave enough to let them succeed, and to those who've supported them.

US NAVY
The unease that's being expressed on the web about Rear Adm. Tyson's appointment shows just how hard a fight it still is for women in power on ships to have their expertise recognised. See http://forums.military.com/eve/forums/a/tpc/f/69719858/m/9670032652001

Tyson said "As far as the trailblazing piece, I understand I am the first woman on the job," she said. "But I'm a professional just like my fellow officers are, and my fellow strike group commanders."

Adm. Gary Roughead, the chief of naval operations, said her appointment should send a signal "that there is no limit as to what you can do."

I myself feel 'If only such a claim were true.' And while it's good to see women progress, politically I regret that she is working for such a belligerent country.

NAMIBIA FISHING
By contrast, Johanna Kwedhi is Namibia's first female trawler captain, in charge of 23 crew. See a video of her at http://www.bbc.co.uk/news/world-africa-10893469.

The BBC reports: "Johanna captains the Kanus, one of the largest trawlers operating from Luderitz Harbour... It's her responsibility not only to navigate a coastline infamous for shipwrecks, but to bring in a profitable catch.

Trained by the Namibian Fisheries Institute, she was appointed skipper after serving for eight years as an officer and chief mate under a Spanish captain. Her company now has four more women doing similar training.

"This is a man's world," says Bosun Evalisto Shipo. "Since the beginning, it's been a man's world. If your leadership is not appropriate for the crew, you will not earn their respect."

And Captain Kwedhi has done so - while breaking another barrier too. "We have never seen a black person in charge of a ship," says Evalisto Shipo. "It has always been a Spanish person actually."

What a competent woman she must be, to succeed despite such odds, as well as being the single parent of a 14-month-old son, Innocent.
Posted by Dr Jo Stanley, FRHistS. at 14:30 No comments:

I've just found the best image yet that illustrates women's struggle to get into that bastion, naval ships. Maybe an artist's version will work as the cover for my new book on women on the wartime seas.

This is an Imperial War Museum b&w photo. I found it last week in their photo archive. This archive was such a rich source that I wished I'd used it before researching any of the word-based data for the book.

That's because photos - of course - are better than a thousand words. The images I saw tell so many important and hidden stories. They include
~ women cheerily cooped up cleaning out ships' boilers in WW1 (unions banned this in the next war)
~ a continuity 'girl' who was in a submarine for 8 weeks while filming in WW2 (despite all claims that women were never on submarines in wartime).

I've tinted this photocopy to draw out the symbolic significance of the woman and the steep rope ladder she's having to climb. And the chaps are deliberately greyed out.

The Wren is not only having to do a tricky feat in the ridiculously inappropriate clothes she was required to wear.

She's also rising to make her way though the denizens of that institution, the ship. Their exclusivity is conveyed through jeering and hostile faces far above her.

Yes, it's historic. The un-named Wren was a Boarding officer in WW2, and today's Navy has good equal opps policies.

But what a useful illustration of the gender hostility at sea that so many women have had to combat.
Posted by Dr Jo Stanley, FRHistS. at 11:13 No comments: