The Hello Sailor exhibition opened in Tyne & Wear's Discovery Museum on Jan 27 . It looked great, because it had more space than has been available in other places, and because local material was added.
(see pictures below and right, courtesy of DD) 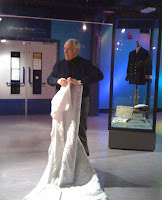 My favorite bit was after all the punters had gone home. The bunk in
the cabin set had been made up incorrectly. Blankets are customarily
folded and laid on top of the mattress, not tucked in, so that the occupant can make a quick escape if the ship starts sinking. John got into his old role and sorted out the bedding properly, as our photos by Mary Hesling show. 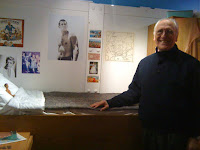