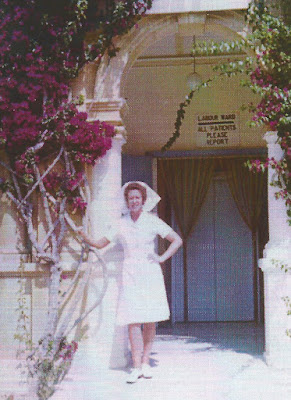 Nora Miller, later Lewis, (born 1940) (pictured above in Malta when she was a QARNNS) is one of the rare women who nursed in both UK navies, Merchant and Royal. She is part of a remarkable cluster of women who did an archetypal feminine job but at officer-level, and in a workforce where men dominated. Such women numbered hundreds not thousands.
Her memoir, Nurse in the Navy, was published in 2016. It is all too brief: just 136 pages. But two of its key elements are her experience on the prestigious liner/cruiseship Queen Elizabeth from 1966-68, and in the Royal Navy from 1970- 1981. 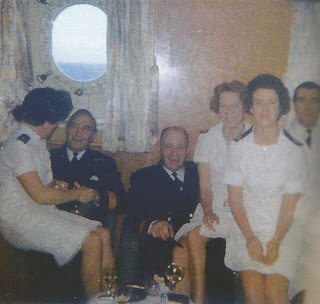 Looking after cruisers and crew: 1966-68
In commercial shipping women had nursed on passenger ships since before 1900. For the first few decades of the twentieth century they were often employed as stewardesses but expected to nurse when needed, on top of their regular work. When Nora Miller, a former head-girl, joined the iconic Queen Elizabeth in 1966 she joined a world where the two or three Sisters were a respected full-time part of the medical team. (See picture of QE team above: Nora is far right)
‘I settled into a pleasant routine of crossing the Atlantic in winter followed by a cruise, either to the Caribbean from New York or to the Mediterranean from Southampton.’ In summer her ships simply crossed between New York and Southampton.
‘After two years this wonderful adventure came to an end for me.’ Cunard replaced the ship with the QEII in 1968. Jobs were lost. ‘It was last in, first out’ and she went ‘drearily back to life ashore. In the long term it was a good thing as for me it was not a life with any real substance.’ She left ‘far more worldly wise then when I joined.’
Many seafarers eventually become tired of living out of a suitcase, but still addicted to travel. For Nora "I loved the idea of a regular change of job and realise that if I joined the Royal Navy they would do it for me with regular postings, some abroad.’ She became a Queen Alexandra’s Royal Naval Nursing Service Sister in 1970. 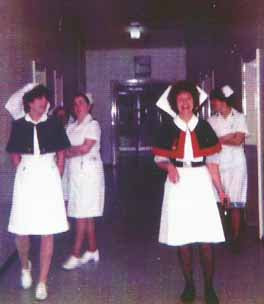 Navy and QARNNS: 1970-81
By contrast to nurses on passenger ships, women had nursed intermittently in Royal Navy hospital ships near combat situations since at least 1660. They became a separate professional force in 1884, which was in 1902 named Queen Alexandra’s Royal Naval Nursing Service.
They worked on hospital ships in the First and Second World War and in Korea. However QARNNS’ usual place was in naval hospitals ashore.
Many QARNNS longed to be based with the Navy overseas. Nora too had looked ‘forward to foreign postings and was dismayed to see the Navy withdraw from Hong Kong, Singapore and Mauritius the very year I joined.’
In fact, she was lucky. In 1971 she was posted to Malta, one of the few remaining overseas naval bases in this Cold War. She afterwards went to the US on an exchange scheme. Then in 1979 Nora had ‘another ground-breaking posting abroad’ at RAF hospital Wegberg near Düsseldorf where she taught obstetrics to Royal Navy student nurses. (See picture above, Nora is on right).

Changing times: 1970-90
Naval nurses were not allowed to serve at sea in this period (male sick berth assistants did that work). But in 1971 when she was allowed on board HMS Glamorgan for a family day Nora told an officer she met that ‘"It won’t be long before we women are at sea with you"… To my astonishment he replied angrily, "You can stop talking like that! It's very unlucky to have women at sea!"
In fact, it took another two decades before women in naval service were allowed to routinely serve at sea, just like males. Exceptionally, ‘in the 1970s [naval] nurses were quickly put on board ship if it was sailing off to evacuate British families from some danger zone, as happened several times’, she explained.
When she returned to Portsmouth in 1973 ‘Sexist attitudes in hospital were being challenged at last… One of the Ear Nose and Throat doctors… told me to fetch him a cup of coffee. "Get your own coffee," I replied. He looked startled. "But nurses are the handmaids of the doctors!" he said and was only half joking. "Not on my ward, they’re not!" I told him firmly. "And don't you go asking any of my staff to do it either.’

The two key changes that affected naval nursing were:
~ 1977. The decision to include women under the Naval Discipline Act, just as men were. Nora Miller told me ‘It changed everything.’ QARNNS became properly affiliated to the Royal Navy, although remaining a separate service. They wore a more naval uniform with gold braid on their sleeves. Nora found that when the QARNNS came back from their post-NDA course some male medical assistants were quite hostile because the women now had a more naval status. They got used to it.’
~ 1990. NDA was followed by the 1990 decision that women could serve at sea on naval ships. By that time Nora had left the QARNNS to be with her husband.
In both Merchant and Royal Navies, a few women were also serving as doctors from the 1960s.

After 1983 males were allowed to be QARNNS. Today mixed health-care teams serve on all ships. Men still predominate in the higher medical jobs. 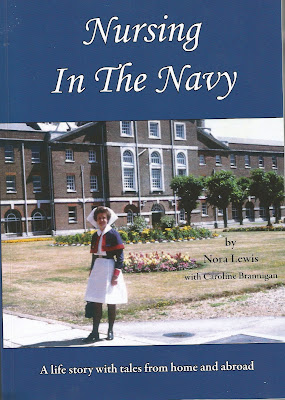 ~ Nursing in the Navy can be bought via http://www.carolinebrannigan.com/memoirs-by-caroline-brannigan.php.
~ Naval nursing history is outlined in my forthcoming book Women and the Royal Navy (IB Tauris/NMRN).
~ Passenger ship nurses’ history is in my From Cabin “Boys” to Captain: 250 years of Women at Sea (History Press, 2016).
Posted by Dr Jo Stanley, FRHistS. at 05:23 No comments: