‘Fleet Week is NYC's official gay week-long holiday. It's like Passover for gays.’ 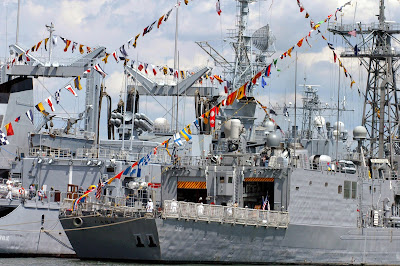 It was only when the Huffington Post asked me to speak about the LGBTI people and New York’s Fleet Week, yesterday, that I came across this phenomenon that must fascinate all anthropologists and anyone into maritime culture.
This spectacle, from 20-26 May 2015, is designed to publicise an aspect of a nation’s military might. But it’s been appropriated as a festival of, well, lusting. Queer lusting. And women’s heterosexual lusting. Hello indeed, sailors!

OFFICIALLY
Officially, Fleet Week number 27 in New York now means a ‘time-honored celebration of the sea services, and an unparalleled opportunity for the citizens of New York and the surrounding tri-state area to meet Sailors, Marines and Coast Guardsmen, as well as witness firsthand the latest capabilities of today's maritime services …
‘In addition to public visitation of participating ships and military band concerts, there will be numerous exhibits and aviation demonstrations throughout the week showcasing the latest technology of the maritime services and the skilled expertise of our dedicated service members.’ 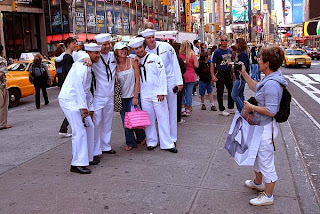 UNOFFICIALLY
Lascivious drooling over anything in a lanyard and bellbottoms on the unruly streets is not something historian Jan Jan Rüger could have guessed would follow on from the Victorian ‘naval theatre’ of our patriotic, grey-hull-focused Fleet Reviews, which he explored in The Great Naval Game: Britain and Germany in the Age of Empire, Cambridge University Press, Cambridge, 2007.

Unofficially, NYC’s Fleet Week it means a time when anyone who fancies male sailors (or rather, fancies the stereotypical idea of them as butch and bendable icons) dolls themselves up, takes plenty of money to buy drinks for their quarry, and cruises ports in search of the beefcake of their dreams.
I'm not sure if women will be using the events for netting women sailors. That’s a hidden story, as yet.
Fetishised gay male re-readings of events meant in 2012, for example,that the chance to view ‘The gayest military movie of all time’, Top Gun, on the warship USS Intrepid was full of amorous promise for uniform fetishists and "Masc bi frat bros".
In 2013 traders, including pink proprietors,lost an estimated $20 when the Week was cancelled as too costly.

NABBING ANY SAILOR
Around 1,500 sailors will arrive in NYC, be feted like movie stars, and become the besieged objects of landlubbers’ desire. No doubt some will take advantage and some will be taken advantage of. And yes, civilians will certainly learn more about the Navy, but not in the way the spin-doctors want.
Nabbing a Fleet-Week-sailor makes the game clear in its online guide for women:
‘This is not the man you're going to marry, just a fun little fling. He's a knight that comes in his own shining armor. In fact, that all-white get-up is so shining, it's often blinding, making one sailor hard to tell from the next. And that's fine. You don't need to be picky. Just about any sailor will do. Here's how you can take advantage of one of the 3,000 seamen who arrived in town today.’ (http://gawker.com/5548501/nabbing-a-fleet-week-sailor-a-how-to-guide)
More sensibly it warns that although sailors will be doing ‘outreachy’ public relations stunts, off duty they will be wanting booze (US ships are strictly dry), privacy, and ‘a week of fun and freedom.’ Use your condoms.
‘Be a Lady: We hate to break it to the gay guys, but most of the sailors are going to be of the heterosexual persuasion.… the majority will be hunting for lady tail (and for those that are heteroflexible, they've been beating off with bunk mates for months, so it's time to flex their hetero muscles).’ 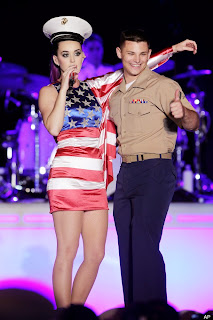 RELATIONSHIP?
Personally, I'm all for people being valued for all the complex human beings they really are, not objectified. Any other way of connecting seems reductive and bound to lead to misery if people are seeking honest relationships. But that’s a feminist woman’s perspective, whereas this publicity is all about carnivalesque, one-off friskiness.
It’s lite. And as Tina Turner sang ‘What’s love got to do with it?’ 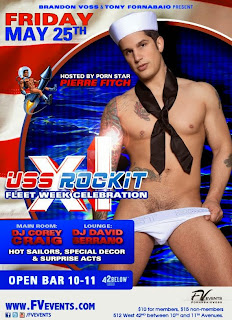 
DO TELL? OR DO BE CIRCUMSPECT?
Fleet Week in the US is particularly important and festive since the ‘Don’t Ask, Don’t Tell’ law was repealed in 2012. LGBTI rights in the military are now better recognised.
Much queer publicity plays on this: ‘Do Ask, Do Tell’ consumers are urged; ‘Do ask, do tell’ cocktails are on offer. In turn sailors are exhorted ‘Come out for Fleet Week’.
If only it were that simple. If only expressions of sexualities, especially marginalised ones, didn’t have complex repercussions for seafarers.