Only Female Survivor of Royal George, 1782.

Dr Hilary L Rubinstein's sleuthing has produced The Only Female Survivor of the Sinking of the Royal George.

'The woman was Elizabeth (“Betty”) Horn, née Badcock, daughter of a Plymouth shipwright.'Baptised in 1758, she had since 1778 been married to John Horn, an experienced seaman who was now a petty officer, serving as one of the ship’s quartermasters  ...

'[When the ship sank at Spithead, because of a mistake, 'A chivalrous seaman dragged the surrounded, struggling Betty out of one of the  [portholes] and threw her clear of the ship.

'No sooner had he done so than the ship lurched further, so that the portholes were almost horizontally above the heads of people who had not yet managed to escape, and who consequently dropped back into the ship.

'To the sound of haunting screams, the ship then sank, trapping most of her terrified occupants ... into the sea.'

For fuller details, including other women's plights, see https://www.historyhit.com/the-only-female-survivor-of-the-sinking-of-the-royal-george/.

Hilary's latest book is Catastrophe at Spithead: the Sinking of the Royal George, by Seaforth Publishing, 2020. 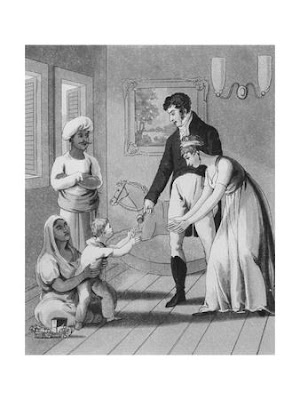 Nearly two hundred ago Ayah Carruthers (her own name is not recorded) was apparently the very first ayah rescued at sea by her English employer.

Ayah Carruthers' employing family may have looked something like this picture. It's a representation created just seventeen 17 years earlier: Charles D'Oyley: A European Lady and Her Family, Attended by an Ayah, or Nurse (1815).

Working for a mobile family was a mixed blessing for South Asian servants, including ayahs (nannies and maids). They found travel could be:

But, when shipwrecks inevitably happened, being a woman did bring the chance of gallant rescue - even if she was brown or black. By contrast male 'native' servants were usually expected to look after themselves.

All we know of this ayah now is that she was old, and rightly scared, in autumn 1832. She was probably from Calcutta (Kolkata), as she was accompanying Josephine and Matthew Carruthers from there to Tipperah (Tripura) in Bengal (Bangladesh). Matthew worked for the East India Company (EIC)

The party's terrible sea experience began just hours after they set off, the very evening  after the Carruthers were married in Calcutta Cathedral on 2 October. (St John's, pictured). 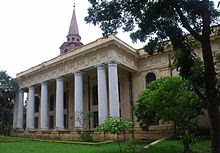 (Although grand the cathedral was already proving far too small for the burgeoning British population; plans were beginning for the current one.)
Probably  Matthews' EIC colleagues attended the celebrations. That network is likely to have found him his servants too.
After the ceremony  Ayah Carruthers, plus at least one other woman servant and the newly-weds, began their 217-mile voyage. Perhaps Josephine had with her her trousseau.
Depending on conditions such a short coastal and river trip took several days. Sailing was far easier than going 1,025 miles over hilly terrain.
We can imagine the ayah feeling many emotions ranging from excited or jittery about the journey and her relocation. This could have been her first sea trip. Or, as she was elderly, she might have been a veteran traveller.

It seems that she was going to be working in the home of  Civil Servant Matthew. He was already employed as Assistant to the Collector at Tipperah, a princely state newly under Rajah Krishna Kishor Manikya.

The Carruthers entourage was heading east-north-east. Unruly seas and wild elements entered the scene after four days of travelling, which had made them sea sick.

Today no-one today would know about this ayah involved in a routine relocation, except that she was one of the 'helpless female' characters in a talked-up drama:  an 'instance of preservation of life ... through the skill and intrepidity of a gentleman of the civil service, [which] deserves to be recorded,’ according to the Madras Courier and the Asiatic Journal and Monthly Miscellany.

The story was later immortalized in a Victorian compendium, Acts of Gallantry.
Under headings such as 'Remarkable Preservation of Life During the Late Gale,' most versions record that:

'On the 6th the pinnace was forced to anchor, and in the evening the gale came on with terrible violence. Mr Carruthers was dreadfully sick with the motion of the vessel.

'And Mrs Carruthers was lying on her couch suffering under an attack of fever, when the pinnace was blown over and drifted into the stream’ [which means the current].

‘Mr Carruthers caught his wife, and they fell into the water together. When he came up, he succeeded in grasping a part of the vessel, but was knocked off by a man falling upon him.

‘On coming up a second time he saw his wife struggling with her women, who were trying to save their lives at the expense of hers. Seizing her by the hair, and grasping one of the iron stanchions, he got into the wreck, Mrs Carruthers being nearly lifeless ...

'watching for a favourable opportunity, when near the shore, he directed Mrs. Carruthers to take off her flannel gown and cling to his waist ... they committed themselves to the stream, which carried them down many yards ...

'by dint of labour, in about half an hour, he had the delight of landing his wife upon the bank, though at night, without shelter, she nearly naked, the wind piercing cold, and the rain descending in torrents ; at length they procured some dry clothes and a fire from the natives.

'The ayah, or female attendant of Mrs Carruthers, still remained on the wreck, and Mr Carruthers plunged into the rapid and dangerous river a second time, and brought the poor old woman to shore. Six of the crew, and one of the women, were drowned.’

The tragic story is so unclear that we have to guess a lot.

1.What vessel was carrying the Carruthers party?

They were said to be in a pinnace. This is rather puzzling as a pinnace is just a  ship’s boat that acts as a small tender taking people to port. It seems unlikely that they would have been using a small boat for the entire voyage from Calcutta, round the upper Bay of Bengal. So maybe the reporter's use of the word 'pinnace' is anachronistic and refers to something like the independent vessel pictured.

2. Where exactly was the shipwreck?

The article refers to a river, indicating the likelihood that the tragedy happened somewhere on the vast and tidal Meghna River. Three miles across, the estuary is a significant waterway and the start of an ancient route to significant Bengal towns.

The nearby shore is mentioned. Possibly - as they were in a small boat - the Carruthers were very near the port where they intended  to disembark for Tipperah. Chandpur, at the junction with the Padma River, is the most likely transport hub.

Who was the ayah with?

Josephine's memsahib was born Josephine Parker and was 22. Little is known of her. But records shows a HM Parker was secretary of the Board of Customs, Salt and Opium. I'd place a small bet on his being Josephine's father.

By contrast EIC records reveal much about Matthew. He was 22 and on the rise. Having an ayah was normal after such a man married.

Matthew was the Eton-educated second son of David and Mary Carruthers, of Bloomsbury Square, London.

David seems to have been a wealthy merchant, involved in EIC internal politics and supported of free trade with China - a stance that was linked to opium trading politics. The extended Carruthers family of Dumfriesshire had long been involved in EIC India.

In 1828-29 Matthew been trained as a writer (meaning administrator) at the East India Company College in Hailey, Hertfordshire. Later referred to as Haileybury, the college groomed bright 16 -18 year olds for elite careers In India.  (see picture below, right, of the college today).

The subjects on his curriculum included Urdu (Hindustani) Bengali, and Marathi, as well as natural philosophy and the classics.

All his education meant he understood not only the correct British Christian chivalry required when shipwrecked. He might well have been able to speak the ayah's language too. 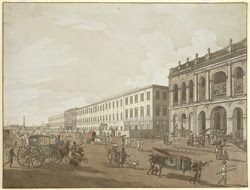 After leaving Hailey Matthew arrived in India in 1830. He'd have been familiar with Calcutta's Writers Building, (left of the Court House, the old  EIC headquarters, in this picture). EIC architecture showed such men their own significance in the social order, including in relation to humble ayahs.

After gaining his feet in Dacca (Dhaka) Matthew had worked in Maimansinh (Mymensingh). It seems likely that the ayah, and maybe Josephine too, were going to this rural outpost for the first time, to set up the marital home.

Who knows. But she probably gained a materially comfortable life. Matthew's EIC career records show that he stayed in the area for six years after the shipwreck, including becoming acting civil judge in Tipperah.

Back home in England David, Matthew's father, was making pro-Free Trade speeches,  arguing against EIC power. He was part of the pressure group that curbed the EIC with the 1833 Charter Act, and helped open up trade with China.  He briefly became MP for Kingston Upon Hull, in 1835, a little before William Wilberforce.

in her local community the ayah would have accrued vicarious status from this elite family. She had time to recover from the traumatic voyage, and to network with ayahs in other British-India households.

But perhaps EIC supporters there would have been hostile to her household because of David Carruther's part in the major 1833 row about the extending the EIC charter. Ironically it was written up in the same journal that praised his son's bravery: The Asiatic Journal and Monthly Miscellany.

Matthew died in 1838, aged 27. This meant Josephine, the ayah, and any children, would have to leave.

The odds are that Josephine married again within  a year, and took her ayah with her.

Did they have the courage to travel again by sea? We can only guess: yes. These were indeed becoming mobile times for ayahs in the EIC's India.