On this day, 31 Jan 1953. passenger Nancy Bryson (pictured) lost her life in a storm while trying to save a child from drowning. All the women and children aboard died soon after: they'd been put into the same lifeboat, which had been dashed against the ship.

They were on the MV Princess Victoria , a British Rail ferry en route from Stranraer to Larne. In all 128 of the 180 on board died.

The Princess Victoria was the worst shipping disaster in the peacetime until 188 died on the Herald of Free  Enterprise in 1987.

The wonders of online resources mean that for the first time she’s been tracked down as a real person. I’ve found the person behind the heroine she was constructed as, in William Thompon's extraordinarily sentimental poem. http://williamthompsonpoems.blogspot.com/2008/02/nancy-bryson-heroine-of-princess.html

Nancy was 53 and travelling back from a brief trip when the first purpose-built  ro-ro ferry sank just five miles off the Copeland Islands, within sight of the County Down coast.  See Movietone film footage at  https://www.youtube.com/watch?v=gAFHWMV9x0g

Nancy's daughter Margaret (later Njonjo) said her mother "was one of the bravest women on board, who whispered words of comfort to other passengers and led them in singing a hymn.

"She also tried to help a three-year-old child into one of the lifeboats but failed to do so, going under (the water) herself in the process. My sisters and I are glad to know she found immense strength in her own faith, to the point of being able to help others."

Why was Nancy there?

Nancy (nee Pollock, 1899-1953) was the wife of Rev Edgar Nisbet Bryson,an African Inland Mission missionary. Since 1934. They had been living in the Eldoret area of Kenya, in the Rift valley.

The Brysons had come home on furlough. With their three girls they were staying at Castlerock, County Londonderry, their home town.  They had been planning to return to Nairobi by air on February 23.

Why is Nancy’s story interesting?

• CRIMINAL WASTE. Because her productive life was wrecked by ship-owners’ negligence.  A Belfast court of inquiry found that this was not a seaworthy ship,' because of the inadequate strength of the stern doors and a lack of drainage on its car deck'. There'd been two prior warnings.

• ACTION. Because she tried to lead prayer and to rescue a toddler during the sinking: she put concern for others first.

• SEA-SAVVY. Because Nancy was a relatively frequent traveller at a time when women had less mobility and motility than men.  She'd come back from Mombasa with the girls in 1946, probably on a post-war furlough. One of her daughters had been only a year old at that time ,so perhaps Nancy in 1953 acted with a mother's awareness of a child's preciousness. 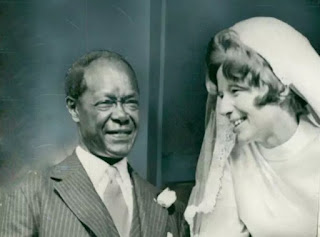