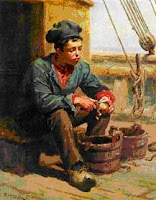 Women in seashanties are often cast as loving sweehearts who pull on their seabritches and sail away in a quest for their sailorboys. See M Jwycha's new article about them at ttp://open.salon.com/blog/mjwycha/2009/07/17/sea_shanties_cross-dressers_and_women_warriors

And there's lots of ambiguity about cabin boys in such songs, which may have been away to talk aceptably about gay sex with young men. (See pic left).
Women are never usually the robust singers of shanties, which were devised to assist manual labour such as heaving heavy sails up high masts. Shanties are not about what you might call 'feminine' subjects, more about ships, far-off ports, muses and whores.
But I'll be exploring how modern female landlubbers appropriate worksongs and images of the sea in a workshop at the Raise Your Banners festival, Bradford, on Sunday Nov 8. 'Taking the shanties off the sailorboys' will include discussions of such songs as Sisters Unlimited's 'Childbirth's no bed of roses.'

For info on the festival go to http://www.raiseyourbanners.org/
Posted by Dr Jo Stanley, FRHistS. at 03:48 No comments:

Women at sea in the Falklands War

Over recent years the stories of eight women who I’ve talked to about being at sea in the Falklands conflict have all been fairly different - predictably.

But this last month the narratives of three women who were on the QE2 (which acted as a troop carrier in summer 1982) made me see how very different a ship seems to each individual. War artist Linda Kitson and civilian nurses Jane Yelland and Di McLean told such different versions that I sometimes wondered if we were talking about the same ship.

The difference is not just in the way the stories are narrated, but the activities in which the women engaged (Kitson drawing rapidly [see her work, above left], Yelland and McLean dealing with crew injuries, then later wounded troops) and the way they saw their social situation and options. Yelland was on ‘her’ ship, McLean on ship for the first time, and Kitson – an experienced traveler - enmeshed in a floating world of young military officers.

Indeed, they barely knew about each other. Even today McLean has never seen Kitson’s drawings of what was going on on deck while she was nursing below. As for the laundresses’ experience, I fear it is lost to history.

I’m listening to these women for my forthcoming book on women and the sea in WW1 and WW2. But it seems like women’s experience of sailing to and from the Falklands also deserves a book. It was both the last of the traditional wars and the first war in which civilian women were so close to a combat site.
Posted by Dr Jo Stanley, FRHistS. at 22:51 No comments: 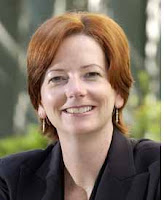 It seems like the kind of behaviour that should have gone out with the dinosaurs. Certainly such offensive laddishness was supposed to have vanished in the 1970s but.... On July 5 it was confirmed that four male sailors from Royal Australian Navy Ship HMAS Success were sent back home to Oz from Singapore in May.

They had been having a competition to sleep with the most women on board. The men kept an account book recording the number of female crew they had had sex with. "The ledger" had dollar amounts written next to each woman's name Officers and lesbian women won a man an extra point.

The book was found after women aboard complained. Since then there's been much
lurid joking on the internet - and some creditable official assertions of women's rights. Women's Forum Australia spokesperson Melinda Tankard-Reist points out:"When you consider that women constitute 40 per cent of the Navy, they have a right to feel safe in their place of work and not to be treated as potential notches on a sailor's belt. Obviously things have gone backwards, I thought the defence forces had moved on from this sort of pack-animal behaviour.... I don't believe these men should be able to serve at sea anymore because they're not reliable, they can't be trusted, they don't respect women and these are not the kind of men that we need defending us."

Deputy Prime Minister Julia Gillard (above, right) told Network Ten"We don't want to see anything that precludes women from having a good career in our armed forces if that is what they choose to do with their lives....we need our defence hierarchy to get on with the job of investigating these claims and taking appropriate action."

Chief of Navy, Vice Admiral Russ Crane said the matter is being referred to the independent Australian Defence Force Investigative Service (ADFIS), which will decide on disciplinary or administrative action.

HMAS Success is not a warship but a replenishment oiler (a naval auxiliary ship with fuel tanks and dry cargo holds, which can replenish other ships while underway in the high seas)
Posted by Dr Jo Stanley, FRHistS. at 06:17 No comments: