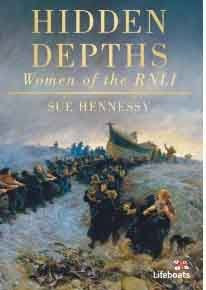 Now we can know the full story of women in lifeboats. Britain's first book on lifeboat women is just out - Sue Hennessy's Hidden Depths, Women of the RNLI (The History Press, £16.99).
I was so excited and impressed to read about the work of women crew on today's high tech lifeboats. They're such pioneers - just like their tough forbears who acted like human tractors, launching the lifeboats.

MOVING TALES
But I hadn't expected to be so moved by stories of women who do the much less derring-do task of raising funds. Particularly moving are the accounts of those who bequeath their life savings to the RNLI and have lifeboats named after them. Those pages gave me two cries a minute.
This book is a mix of both the modern and historical, based on interviews with many women. So it's a subjective personalised history of an organisation/group of communities seen from many angles.

CONTESTED SPACES
My favourite bit is where Sue Hennessy, the just-retired Principal of the Lifeboat College, talked - oh so delicately - about the thorny problem of going to the loo.
In looking at women's history many have found that lavatory usage(ladies vs gents) is symbolic of gender tensions. The issue is about how difference is respected and what kinds of space women are allocated.Indeed, a group of US feminist academics are putting together a book called Toilet Papers: The Gendered Construction of Public Toilets.
When it comes to the sea specifically, cross-dressed women seafarers in history used horns or urinating instruments as a kind of funnel. In maritime life so many arguments about 'we can't allow women on ships' utilise the lack of space for separate bathrooms as the justification for women's total exclusion.
So how do women today manage it on the small RNLI boats on choppy waters when they have to struggle their way through so many layers of protective clothing to access a shared bucket in cramped cabin? Forthrightly and with humour.
Dwyn Perry of Moelfre, who is the helm on the inshore lifeboat and the navigator on the all-weather lifeboat describes her procedure: "I now kindly say, 'Right you lot, I'm off to the loo' and hang off the back end. I know it's not very ladylike but it works." Nicki Wood of Sheerness has her own bucket. Karolyn Rath of Clogher Head "is always first off the boat after a shout [call out] but has to tolerate the men ever asking her 'have you not gone yet?'".

MATES - AND SEXISM
What comes across clearly is the acceptance, the kindliness and cheer of being part of a dedicated team. These women and men are mates, whatever the difficulties some people still have about women in the job. Such misogyny is largely absent from this upbeat book but there's one telling tale:
Eleanor Hooker of Loch Derg is part of all-women crew of six. In 2004 they went to rescue a cruiser that had gone aground. The small boy aboard called 'Daddy, they are all women!' Eleanor joked 'Will you wait while we go back and find some men?'
But clearly RNLI women are doing the job just fine!
Posted by Dr Jo Stanley, FRHistS. at 00:55 No comments: