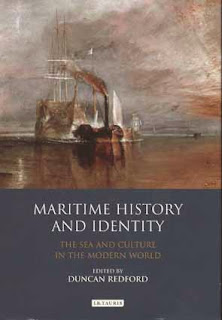 Maritime History and Identity: The sea and culture in the modern world has just come out with a chapter of mine in it. The book is edited by Duncan Redford and fourteen chapters discuss the identities of navies, seafarers and regional identities.
My chapter‘They thought they were normal - and queens too: gay seafarers on British liners 1945-1985’is on pp230-250, IB Tauris, London. It's in a section on individual seafarers which includes Cori Convertito's discussion of how tattoos were used to express individuality in the Victorian Navy

CRUCIAL QUESTION
I write that 'The question crucial to this essay [is] What was it about the sea that enabled members of a pilloried subculture to finally feel that they were ‘normal’? How did conventions become so inverted that members of the shipboard Lesbian, Gay, Bisexual and Transgender (LGBT) culture saw heterosexuals and men without frothy petticoats as the odd ones out, even as inferior beings?

WHAT'S IT ABOUT?
The opening lines explain: 'This chapter is about a hidden history that challenges ideas of a ‘normal’ male seafarer. It enables a far more nuanced history of human beings if we see the un-problematically macho Jack Tar with his legendary girl in every port as just one possible identity, and maybe even a myth.
'Seafaring work aboard British passenger ships in the 40 years after WW2 offered remarkable opportunities for men to enjoy a post-modern transcendence of fixed sexual and gender identities.
'Shipping lines such as P&O, Cunard and Union Castle inadvertently enhanced the future of British men operating at various places on a whole spectrum of identities. This included those who were quietly homosexual masculine-acting men; those who were contingently bisexual; anyone who habitually put on a frock for fun; semi-professional female impersonators; drag queens (who do not necessarily seek to pass as women but utilise irony through campery); and intersex people born with intermediate or atypical biological characteristics.
'Previously labelled hermaphrodite or androgynous, some such men felt they had been born into the wrong body. Those who could afford surgical and chemical intervention would later have sex reassignment surgery (SRS) to assert their ‘proper’ identity – as did the iconic ex-seafarer April Ashley. The range of human activity and the labels that different people choose for themselves are myriad and fluid, deserving both attention and respect.
'A permissive culture on celebrated liners and cruise ships ... enabled thousands of members of this casual workforce ... to confidently establish satisfyingly solid identities. These identities went beyond that of hegemonic masculinity ....
'They thought themselves not only normal, because they were in the majority on some ships. Going further, [some queens] also asserted they were as elite as the Hollywood divas they emulated – but with varying degrees of irony and theatricality. This was play. This was fun.'

CONCLUDING WITH A WISH ...
The chapter's conclusion says 'By examining ships as institutions that allowed some values to become so deeply topsy-turvy, we can wonder all the more at the over-stated polarisations of land/sea (implicitly ‘constrained’ versus ‘free’).
'The exceptional potential for identity change that is possible at sea suggests that societies may well need offshore opportunities of this kind as a way to embrace the actual diversity of human identity. These hidden histories therefore also raise important questions about geographical mobility’s connections with psychic and social mobility.
'This examination of one brief period in maritime history has sought to be a contribution not only to what I hope will be many more explorations of real seafarers’ transcendence of the Jack Tar figure’s heterosexual fixity.
'It is also part of the academic move towards exploring how different situations produce different sexualities, and how such situations can enable every human being to self-actualise and become all the selves they desire to become.
'Implicitly it is written in furtherance of my wish for a world that outlaws stigma, where diversity, equal opportunities, tolerance and justice will be normal.'