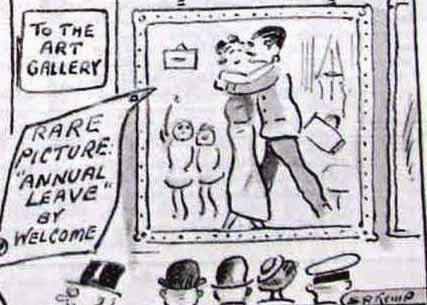 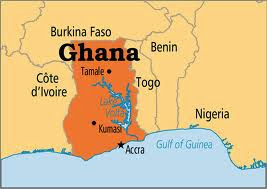 'Three ladies had the chance, after the entrance examination and interview. They were sponsored by Black Star Line. The following year the number increased to four, two nautical and two radio officers, with sponsorship from Black Star Line and Post and Telecommunication Cooperation.
'This was because of the government’s appeal for funds for cadets in the merchant navy ... the government’s plan was to encourage as large a number of women as possible into this profession.'
Hannah Aba Aggrey wrote the dissertation in 2000, 'Women in the maritime industry: A review of female participation, and their role in Maritime Education and Training (MET) in the 21st century' for her M.Sc in Maritime Education and Training (Nautical).
Very interestingly the dissertation shows how much these women were products of Malmo's World Maritime University, and sets them in a world context of the 1990s.(dlib.wmu.se/jspui/bitstream/123456789/569/1/14002.pdf.)

Captain Beatrice Vormawah
Captain Beatrice Vormawah (1956 -)(pictured above) in 1996 became Ghana's first female captain and the world's only black woman sea captain.
In 1976 this daughter of a civil servant and trader was one of those three young women who joined Ghana's Regional Maritime Academy on scholarship.
As a deck cadet she worked on the Pequa River.David O'Reilly's 1996 Philadelphia Inquirer interview ( http://articles.philly.com/1996-02-12/news/25656048_1_ivory-coast-captain-tonnage)quotes her as saying:
`Most men were skeptical ... They gave us cooperation because they thought: "Oh, they'll find husbands and get pregnant and finish halfway." We proved them wrong.'
She got her master's certificate in 1990 and her first command in 1995.
The Philadelphia Inquirer goes on to report that 'Despite the initial skepticism of some men, Vormawah - the only woman among the 44-member crew - says she has encountered almost no sexist prejudice in her career.
'"In Ghana, we don't discriminate much. We are all given a chance."
'"Besides, she says, "nobody can determine your destiny. Nobody makes a straight line for you. Whatever you turn out is up to you."'
By June 2000 she was a Technical Officer at the Cargoes and Facilitation Section of the IMO.Today she's in Croydon as the Head of the TC Implementation Co-ordination Section, Maritime Safety Division at International Maritime Organization.
(Captain Beatrice can be heard describing her career in a podcast: http://www.imo.org/…/Multim…/AudioPodcast/Pages/Default.aspx)

Ghana Ports and Harbours Authority
Hannah wrote that in 2000 a number of women were doing maritime-related shore jobs, working for Ghana Ports and Harbours Authority. They included:
~ Rose Karikari Anang (pictured below) who was Chief of Personnel & Administration (and is now the Executive Director of the Ghana Employers' Association)
~ Alice Enyonam Torkornoo, manager for the training department of GPHA
~ Esther Gyebi-Dorkor,Senior Marketing Officer 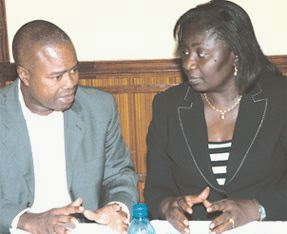 And more women ...
~ Freda Ussher-Dennis was the Executive Secretary of the Shipowners’ and Agents Association of Ghana
~ Patience Amoabeng-Prah was the Shipping Superintendent (Shipping master) of the port of Tema 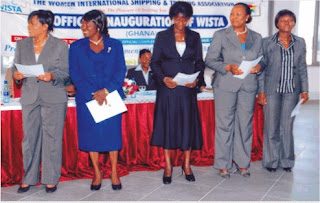 Ghana's maritime women today
It would be fascinating is someone in Ghana could now write the history of what happened in the last fourteen years. What happened to these women?
Naa Densua Aryeetey, who in 2010 became the president of WISTA Ghana (Women International Shipping and Trading Association) (pictured above) gave a paper: 'Integrating women into Ghana's maritime industry through strategic recruitment and empowerment' (at the Maritime Women Global Leadership conference, World Maritime University, Malmo, in April 2014.)
It argued that women are 'still under-represented in most operational aspects of the industry and hardly visible at the decision-making level.'
What happened to Captain Beatrice's rosy picture? Did many many more young women in Ghana step forward and begin working at sea and in the maritime industry, and then what got in their way?