Was he gay? Posterity won't know.

During the last two weeks I've come across a lot of information about three gay men's deaths. And the manner of their memorialisation troubles me. All three have a sea connection. Two were seafarers. One was a well-known maritime historian and leading museum worker. They are part of queer seafaring history, and deserve to be on the record.

But in two cases, nowhere in the newspapes obituaries was there a reference to the person being gay, even though all his colleagues and friends knew he was homosexual. And I too feel I shouldn't out the people here in this public place, so I won't name names. This is how queer history gets lost - and it's sad. And I don't know what to do about it - because I do believe peoples' wishes to keep homosexuality a secret should be respected.

In the third case, Geoffrey's funeral excluded all his gay colleagues. The gay steward's sister announced that she wanted no queers at the event, even though the gay community had been his real family far more than his blood family had been. However, a caring ex-shipmate dealt with this loss by arranging that there should be a small ceremony aboard the QE2. It was Geoffrey's old ship, which happened to be in port at that time.
The picture shows crew and officers - who didn't know Geoffrey - respectfully taking part in this 'alternative funeral.' It's great that it happened, but what a tragedy that there couldn't be more integration between these gay men's lives and their post-death commemoration .
Posted by Dr Jo Stanley, FRHistS. at 23:47 No comments:

Bon viveur Franco Fantini died on January 6 2009, aged 71. Born in Milan, Franco worked on a number of cruise ships in the heyday of campery, including on 'the world's queerest ship', the Andes. Retiring from the sea in 1973, he founded the Cabin Crew cafe, which later became the fabled La Margherita restaurant on Southampton's Town Quay.

On 15.1.2009 the much-loved restauranteur was seen off in style in a hearse drawn by white horses with pale pink plumes . His Italian imported walnut coffin was pulled by a white Victorian carriage and covered in a blanket of roses.

At St Edmund's Church, Southampton, the music was Italian grand opera, and Elton John's Candle in the Wind, which was played at Princess Diana's funeral. Shirley Bassey was an important icon for post-war show-loving gay seafarers and also dined at La Margherita. Her song, Hey Big Spender, boomed out as Franco's coffin was carried into the crematorium, and then I am what I am. Afterwards at the party many former stewards were happily reunited. Donations went to Marie Curie Cancer Care and the Terrence Higgins Trust.

During his last illness Franco was looked after by La Contessa, an ex-stewardess, also from Italy. She tells me her dream is to open a retirement home for gay seafarers where they can cross-dress, wear makeup and be themselves without fear of homophobia.

You can access the Southampton Echo obituary and funeral reports, including a video, on http://www.dailyecho.co.uk/. Look for Jan 6, Jan 9, and Jan 16.
Posted by Dr Jo Stanley, FRHistS. at 12:05 No comments: 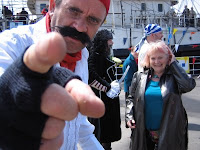 'What could be sassier, you might think, than a bold, sexy buccaneer? Slightly dykey, and into a light-hearted touch of woman-led bondage. Brandishing—but with a beautiful smile—a long whip to go with that lethal cutlass. And mmmmm, swashbuckling along the deck in those sea-washed, thigh-high leather boots. She could shiver any one’s timbers. Geena Davis as Morgan Adams in Cutthroat Island, (1995) is a scintillating example of the genre. Keira Knightly in The Pirates of the Caribbean (2003-2007) could also wield a sword with lethal prettiness.
'The (interesting) trouble is that such images of women pirates are a fantasy. Exploring such a fantasy not only requires—but also reveals—a broader knowledge of just why it is that the sea is popularly seen as a ruggedly masculine space in which real seawomen have only small, strictly prescribed, walk-on parts....'
Read on in the HerStoria issue 1, at http://www.herstoria.com/
Posted by Dr Jo Stanley, FRHistS. at 23:15 No comments:

There's something about a sailor? Beefcake

Poor Admiral West. Key figure in the Government's 2000 decision to repeal the ban against homosexuality in the armed forces, the ex-head of the Navy probably didn't bank on becoming a pink pin-up.
But the sartorially-acclaimed, happily married Minister put himself on Facebook, just to make friends. He included a photo of himself in that irrestible white uniform that seems to cause so many frissons in female and male landlubbers.
And now he has been so inundated by suggestive messages from gay men that he has closed his account.
Under the heading 'Hello Sailor! Facebook flirts hit on Minister,' The Sunday Times (Sun 8 2009) has more details.
http://technology.timesonline.co.uk/tol/news/tech_and_web/personal_tech/article5683542.ece
You can see a great photo of him in a pirate eyepatch, partying with the saucy-looking Kathy Lette, at
http://img.dailymail.co.uk/i/pix/2007/12_03/alanwestDM1812_468x511.jpg
Posted by Dr Jo Stanley, FRHistS. at 02:35 No comments:

You can get a virtual tour of Sweden's sister exhibition on gay seafarers, Safe Haven, by going to
http://www.sjohistoriska.se/sitecore/content/Sjohistoriska%20museet/InEnglish/Exhibitions/Tour.aspx see .
Or you can even go and see the real thing in two weeks time. The Maritime Museum & Aquarium in Gothenburg is showing Safe Haven from February 18 - August 23 2009. http://www.sjofartsmuseum.goteborg.se/

The exhibition is based on Arne Nilsson’s book 'Såna' på Amerikabåtarna ('Those Ones' on the American Boats), Normal förlag, 2006.
Posted by Dr Jo Stanley, FRHistS. at 01:56 No comments: