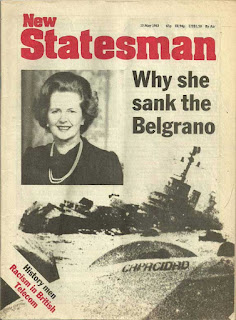 I’ve been tracking down stories about GBT seafarers and women seafarers who were in the Falklands War. It’s for two articles, as well as a conference paper at the Falklands War 30 Years On conference at the Royal Naval Museum in Portsmouth on May 19-20 2012. http://www.royalnavalmuseum.org/documents/Falklands2012conferenceprogrammeMar12.pdf

Finding them is a needle in a haystack job, not least because so many survivors don’t want to talk about that traumatic time. Also many traditional historians prefer the story that only tough hetero boys were there, so it’s hard for people with hidden histories to speak out with confidence.

Researching has been fascinating. The best part of the process was this week:
• by a miraculous accident bumping into 'Wendy' the most famous gay seafaring man of that war, a steward on the Norland, and finding he’d let me interview him.
• discovering that a pioneer woman was there doing ‘men’s work’. She was a Second Mate on the BP tanker British Tamar. Next step is to find her. I’d thought only women doing ‘female work’ – such as nursing - were in that war.
• interviewing a stewardess on one of the non-posh ships in that war, Jean Woodcock on the Hull ferry Norland

My work is going to be published gradually. But you can already read two key things that other authors have made available:
• Sally Children, the Assistant Purser on the Canberra, tells her story at http://www.jamescusick.co.uk/2011/02/sallys-story.html
• Canberra’s acting deputy purser Lauraine Mulberry’s diary extracts, in John Johnson-Allen, They Couldn't Have Done it without Us: The Merchant Navy in the Falklands War, Seafarer Books, Woodbridge, Suffolk, 2011.

And a book that doesn't deal with women at sea but the wives of the combatants who sailed: Jean Carr's Another Story: Women and the Falklands War, Hamish Hamilton, London, 1984.
Posted by Dr Jo Stanley, FRHistS. at 07:02 No comments: