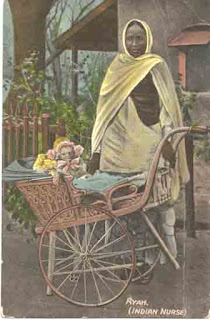 Ayahs (nannies) were the biggest group of South Asian women business travellers in the 19C and early 20C during the Raj.
They sailed to and from Bombay, Calcutta, Rangoon and Colombo, looking after colonial children being taken ‘Home’ by Anglo-Indian parents on furloughs or to British boarding schools. 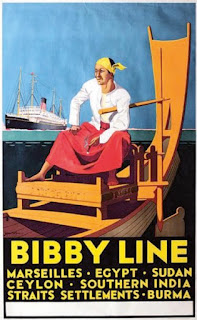 2021 is the hundredth anniversary of the peak year for ayahs arriving in Britain.

Among the 50 ayahs arriving in 1921 was a woman only known as ‘Ayah Hollick.’(It was normal to refer to servants only by the name of their employers).

Ayah Holllick was sailing from Colombo (Sri Lanka) to London on the Bibby Line’s  SS Lancashire. During the three-week voyage she was looking after Mrs Louisa and Mr FC Hollick, their boy of nine and a baby girl, Anthea.

Ayahs gained status from their employers. So this ayah is likely to have enjoyed the Mr Hollick's referred prestige. He was a tea merchant working for the illustrious Dodwell & Co, direct rivals to those mighty merchants of the Far East, Jardine, Matheson & Co. 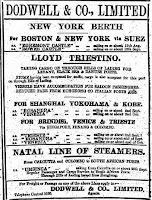 On arriving, the whole family went to Matlock Manor Hotel, a boarding house in south London’s Herne Hill. Possibly the ayah shared a room with the children.

We don’t know what the ayah made of England, nor how long the Hollicks stayed. Indeed, if the family’s sojourn was a long one, the ayah may have gone back earlier.

It's possible that she stayed at the Ayah's Home in Hackney at some point: rates were cheap, the companionship heartening, and prospects for finding a job through networks were good.

Did she work for the Hollicks in Colombo when they returned, and while the children were growing up? Certainly some families had a fast turnover in ayahs. Other ayahs remained devotedly for generations. Some settled as British Asians.

Ayahs were usually proud of ‘their’ children and followed their career from afar, after moving on to work for other ex-pat employers However Ayah Hollick may well have felt ashamed of, or defensive about, what ‘her’ little girl grew up to do. 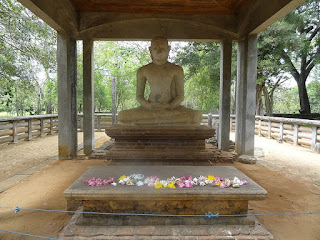 Age 18, Anthea Hollick not only angered the Buddhist world in Ceylon. She repeatedly made world-wide headlines in 1938-39 as the ‘Buddha Girl’ because of a faux-pas.
Whether the ayah was in England devouring the Daily Herald, or in the East reading the Ceylon Daily News she'd have been shocked at Anthea's behaviour, especially if the ayah herself was a Buddhist.


On holiday with her fiancé George Lamont Watt in at Anuradhapura at Easter 1938 the "blue-eyed blonde" had seized a photo opportunity. She'd posed in the lap of the seven-foot-high Buddha (pictured). It looked as if she was in the deity’s arms.

When George’s film was put in for processing someone at the film lab spotted the calumny and reported it. Protest meetings ensued. Buddhist organisations then demanded an official apology.

It was given, and published. Even the Attorney General was involved.

The couple were fined 1s 6d (7.5p), which would have been worth about £5 in today’s money. The derisory amount suggests the level of local cultural respect.

Buddhist journals that summer referred to the "barbarous act of sacrilege." Maha Bodhi & the United Buddhist World demanded "how long are these acts of desecration and apologies to continue?

"In Anuradhapura notices calling visitors’ attention to the penalty for tampering with or defiling sacred relics are prominently displayed in addition to the existence of sit watchers to look after the sacred places and objects.

“Can it then be imagined that these persons acted in good faith? Or, did they ignore all official notice boards and the prevailing customs of the majority of the people of this Island?” 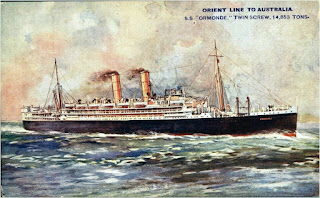 She was so infamous that when she arrived in Britain on the Orient Line’s Ormonde in July 1938, to buy her trousseau, the headlines were ‘Buddha girl arrives.’

Reporters came on board at Southampton, while the ship was en route to Tilbury. Anthea was not contrite despite the shaming publicity. See her photo at https://tinyurl.com/anthea-hollick

The Straits Times picked up Anthea's syndicated comments: "We have lost none of our friends in Combo as a result of the incident – and we have not come home [to England] because of any ill feeling in Colombo."

What’s more, she found a cobra in her cabin trunk on the voyage.

Had some affronted Buddhist really wanted her to die from a snake bite? Or was it just a story? Maybe so, as there were no subsequent reports about dangerous reptiles, as you’d expect.

She brought her trousseau, and sailed home. But people were still talking about Anthea’s photo in August 1938.

“The whole matter is closed now,” she said. “We made a mistake. There was not the slightest intention of insulting anyone’s religion, and we have paid for it. We have been through the mill and in Ceylon now everyone is satisfied. That being the case, I am totally disinterested in the whole affair and I don’t care a hoot what people in England think about it.” 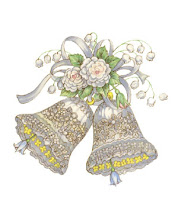 The following January, 1939, she and George married in Colombo. Did her old ayah go to the wedding?

And if so, what were the thoughts about respect that she could not afford to express?  We know only that ayahs had precarious careers. They needed to avoid blacklisting in the ex-pat community.

There’s no evidence as to whether Ayah Hollick ever came back to the UK. She certainly didn’t return as ‘Ayah Hollick’. None of the family’s post-1921 voyages included an ayah.

But some ayahs kept making repeat voyage working for different families. Records show 984 ayahs arrived in England between 1890 and 1960.

However, Indian ayahs still work for European, and Indian, families. Now, when required to travel, they fly.

If Anthea Hollick had children she may well have employed an ayah too. My sleuthing skills haven’t extended this far. If she brought them home to see her mother in Epsom they are likely to have travelled by plane.

When we celebrate South Asian Heritage Month we also acknowledge this remarkable group of possibly a thousand pioneering women. They had unusual privileges, but at a cost: precariousness and obedience.

Ayahs crossed the sea partly out of a desire for adventure and partly because the voyage went with the job. They left behind their own children, in order to tend the Antheas of that colonial world.

Camp men who sailed in the 1960s and 1970s have and some spectacular send-offs. Glitz was the byword in life and in death.

This time, 29 June, it was Hull’s turn, at Chanterlands crem.  Flamboyant Roy Wendy Gibson, formerly a  North Sea Ferries steward, got the Splendid Sendoff he deserved, under a Union Jack. It was an iconic event, probably the first camp LGBT+ Falklands Conflict veteran's funeral.

50 mourners were distanced inside. A further 80 were outside watching it on their mobile phones. Some mourners wore glittering eye shadow and Hawaiian shirts.

It was, as they say in Polari, fantabulosa. The curtain number was Abba’s Dancing Queen.  And Pet Clark's Sailor, stop your roamin' gained a whole new meaning.

Wonderfully, there was no wary silence about Wendy's orientation.
The word ‘gay’ was spoken repeatedly, and easily, many times during the service.

Mourners enjoyed the hilarious story of how Wendy’s late mum coped with his coming out: by clocking him over the head with a frying pan.

The dented pan was used to cook him a Full English breakfast anyway. Of course it  carried on being daily used in the family home that Wendy left, but  stayed connected to, back in the 1960s.

But this was not simply a party animal’s posthumous fling. Wendy (67) was  also one of the most important civilian men of the Falklands Conflict. He was honoured for that at this funeral just as he has been honoured for over three decades.

In a climate that was still homophobic in 1982 he changed military attitudes because of the indefatigable cheer he constantly offered to 2nd Battalion, the Parachute Regiment on board the Norland.

It wasn't just the hours of morale-boosting tunes he belted out nightly on his pink piano to and from the South Atlantic.

It was also the banter too  that  'Our Wendy' offered 'his boys' who were champing at the bit on the boring, entertainment-less seas. His wit cracked people up, even at breakfast, with quips like 'Could you fancy an extra sausage, dear?'

Several out gay men were working on the ship. But Wendy, with his self-taught musical skills and willingness to play on,  led the field as the morale booster.

He was so appreciated that the Paras have given him an unprecedented accolade. They've put up a plaque to him at their Aldershot headquarters.

It’s no accident that uniformed men bearing serious official standards marked the momentous day. 'One standard is good at a funeral. But five!!!" marvelled one Para I spoke to. Wendy was always one for sequins. However the gold and tassels  on show here were of a different sort. They were for this civilian as esteemed veteran.

And it’s no accident that Danny, the kilted bagpiper who led the cortege, has a day job in diversity.
This is a city where people take homosexuality in their stride, and support gay rights as proud activists. The previous Lord Mayor, Steven Wilson, is himself gay, and knew Wendy

Wendy had been part of creating that climate, in ships and then ashore. Just days before he suddenly died he’d still been raising morale by entertaining on the joanna.

A People’s Liberace, Wendy was a man who was never afraid to say he loved men.

Yes, he was a larger-than-life character.
But I know from my interviews with him that he was also more than a star. He was a truly admirable human being.
As Colonel Chris Keeble DSO, 2 Para Acting Commander, said in his tribute: 'What a generous big-hearted hero, a talent who brought out the best, especially through music, good humour and fellowship ... We shall always remember Wendy'
Posted by Dr Jo Stanley, FRHistS. at 13:13 No comments: