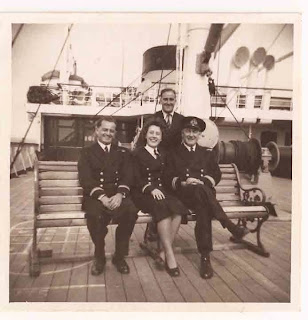 Margaret Newcombe on the 'Britannic' in 1951 with colleagues Brent and Peter and another (details unknown).

Doyenne and pioneer of social directresses at sea Margaret Newcombe died on November 14.

Margaret(1922-2014) is not someone you find when you google her name. But in the world of Cunard shipping she is a legend.
Her charm earlier this year, when I interviewed her, was as remarkable and real as it must have been for the last half century. It astonished me. I'd expected her to be intimidating or a bit visibly ‘good at people.’
In fact I was disarmed and truly warmed. I'd never before experienced such genuine graciousness. And people at sea had been basking in that for over half a century.

TRACING HER JOB'S HISTORY
It was only in the interwar war that ships seeking happy (therefore repeat) customers started employing men as entertainment/cruise directors.
Before that the job had been done by Junior Assistant Pursers with microphone skills and a flair for Ents. They worked with the ad hoc sports and social committee that the passengers organised each voyage. On emigrant ships to the Antipodes in the 1950s the job had been partly done by ‘liaison officers’ employed by the receiving countries.
In the 1950s all the competition from commercial flying meant new customers had to be wooed. ‘It was necessary that shipping lines … [put] more accent upon entertaining the passengers than they had in the past,’ Margaret told interviewer Sheila Jemima of Southampton Oral History project.
Social hostesses began to work with entertainment/cruise directors (although Hilda James was a pioneer in the 1920s). 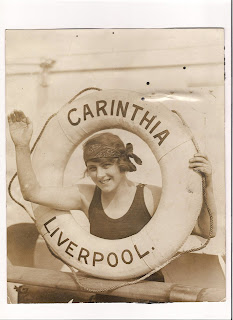 Olympic swimming star Hilda James (1904-82)in 1923 joined the 'Franconia' as Cunard's first social hostess and continued to do work rather like Margaret's for several years on other Cunard vessels. The job then seemed to disappear until the 1950s. [With appreciation for the picture to her grandson Ian McAllister who wrote her biography: http://www.lostolympics.co.uk/]

Margaret thought the job partly emerged because ’someone with sense in the office must have said “Someone must take care of the ladies, the lonely hearts. Make them happy. Introduce them.”’
A social directress managed the social hostesses, of whom there might be several depending on the ship's size and route. At a time when women officers were still rare, the idea of a senior woman organising the social life on ships was even rarer. Margaret was Cunard’s pioneer in this.

THE RIGHT WOMAN FOR THE NEW ROLE
How do you get such a job, social directress? In Margaret’s case it was partly because she was already in the purser’s bureau. It’s the department of the ship now called ‘hotel’ that deals with passenger activities. Her skills were evident.
In WW2 she’d done welfare work with women in the ATS. And as a girl she’d been used to being sociable – her father was a vicar. (In his role at the local aeronautical club he’d introduced her to that inspiring pioneering flyer Amy Johnson – and been rather put out that Amy ignored her.) 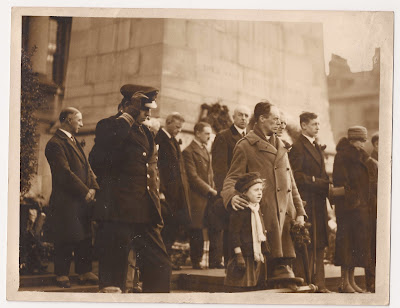 Margaret at Hull Cenotaph in 1926, where her father was conducting the service.

After the war’s end she badly longed to go to sea, as a purser. So many ex-servicewomen felt the same urge. It was the start of Wrens becoming the first women pursers, and cabin crew.
Margaret nearly didn’t get work on a ship at all. So many young women were told ‘girls don’t do that sort of work at sea.’ It was persistence, happenstance and luck that did it, as well as ability, of course. This is how Margaret too succeeded.
In 1947 she’d been employed by the electricity company in her native Hull and applied to every possible shipping company for jobs. Cunard wrote back saying ‘Dear Sir, We don’t employ ladies.’
But then a year later by chance she saw a newspaper picture of Elizabeth Sayers and three other women doing pursering work. Elizabeth Sayers (1912-c2000) had been a Wren Officer with Mountbatten in WW2 before joining Cunard in 1948 as a Lady Assistant Purser. She then became a beacon for Margaret and others. 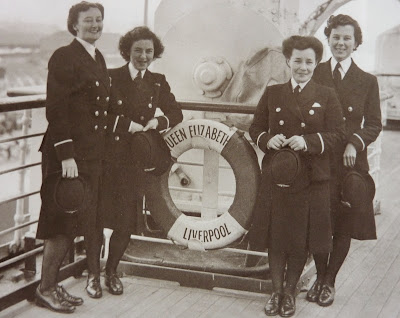 Margaret's beacon: Elizabeth Sayers, and L to R some of Cunard's other pioneering LAPs: Margaret Morton, Phyllis Davies and Mary Marchant. (With appreciation for the picture to www.liverpool ships.org.)

‘So I wrote back to Cunard and said “Dear Sir, you do.” And within a month I was out of my [old] job and into the seagoing experience,’ says Margaret.
As a Lady Assistant Purser (LAP) she sailed mainly to New York in the 1950s. She worked in the ship’s travel bureau until ‘things were getting a bit monotonous [so] they said would I like to be social directress.
‘And so I was able to change my duties and have a new interest … I’ve gone from pen and paper to song and dance.’
By now Cunard had ‘introduced what they called the cruise director and his staff.’ She was the right-hand person of this man, and the first social directress of the Queen Mary.
And ‘for the next seventeen years that’s what I was doing on the three queens: Queen Mary until she went to Long Beach, Queen Elizabeth for one year, and the QE2.’ Margaret also went cruising on Caronia, Britannic and others. 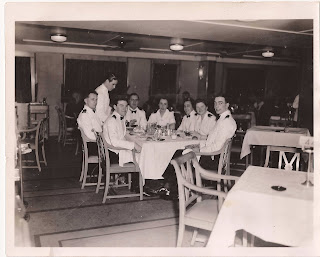 Margaret (right, in background) on the 'Britannic' with colleagues in 1951. Note one other woman. Women pursers were usually outnumbered by at least five to one in that period. Expected to marry and leave (there was a marriage bar), they seldom got promoted, weren't sent on courses like the men and were treated as a separate category, which probably meant a lower pay scale.

ENRICHING LIVES
Nicknamed ‘Dame Margaret’ and often taken to be a member of the peerage, she enriched thousands of passengers’ voyages on many ships - and had a great time as well.
‘I was enjoying myself. I like people, I'm a bit of a show-off and I like giving passengers everything they wanted. I don’t put myself forward but I enjoy them.’
She sailed for 28 years until retiring in 1977. ‘I thought it was time I put my roots down.’
She went to live with an aunt in Torquay, but found it very hard because ‘I was so used to being amongst people, knowing them.’
After three years her aunt died. Margaret moved to a flat overlooking vast fields at Milford on Sea in Hampshire ‘because I had lot of friends here.’
Her Cunard shipmates met regularly at reunions. And they gathered for her funeral at Bournemouth Crematorium on November 28: a network of people who loved her and looked after her, particularly as her health declined in the last few years.

HER LEGACY
Since the 1990s a few women have become cruise directors, senior executives with four gold stripes. They may never have met Margaret.
But in the patchy progress of shipping lines accepting women in senior entertainment positions she’d been their crucial predecessor in showing that women really could be entrusted to cut that mustard, and be truly respect-worthy.

ENJOYING THE WORLD
I think Margaret, a modest and grounded person, would not much want to be remembered as a model for women attaining new careers at sea.
She’d prefer to be recalled as someone who made people’s voyages enjoyable – and who herself traveled delightedly round the world again and again on some of the most exciting ships in the world.

--
(Margaret was interviewed by Sheila Jemima, no date but circa 1992, and the recording (M0100)is available at Southampton City Archive. My own interview with Margaret was on 9 January 2014 and was unrecorded.Since then we spoke by phone and letter. She kindly let me copy these three photos, for my forthcoming book on the history of women working at sea.)

In today's Guardian Lucy Eyre urges women to celebrate the maritime author's centenary.See
http://www.theguardian.com/books/2014/nov/28/why-patrick-obrian-is-jane-austen-at-sea
She writes: 'There are two types of people in the world: Patrick O’Brian fans, and people who haven’t read him yet. This second category includes many women who are put off by the seemingly excessive focus on ships. This worried me, too. I thought it would be all battles and no women: perhaps even (shudder) a seafaring Lord of the Rings.'

JANE AUSTEN
But Lucy Eyre's a convert (like me):
'There is vastly more to [Captain] Jack [Aubrey] than fair winds and rigging. For one thing, there is Stephen [Maturin], the brilliant, bold, enigmatic Irish-Catalan naturalist-surgeon-spy.
'Although Jack doesn’t write up his physical charms, I’ve got a huge crush on Stephen: he is obsessional and secretive, but also fiercely intelligent, moral and passionate. For book after book, I willed the gloriously lithe Diana Villiers to succumb to his pursuit.
'The detail of the world of the ship is wonderful... O’Brian skewers the pompous in their own words. It’s Jane Austen at sea.
'And yet, somehow, I’ve so far failed to convince my mother – Sue Birtwistle, Austen admirer and producer of the TV serial Pride and Prejudice – to dip her toe in the water.
'The centenary of O’Brian’s birth will be 12 December.'


AND THE WOMEN ABOARD
I myself would have liked O'Brian to give more space to women - including those disguised as boys (how else could a gel get a job at sea?).
After all, Austen's very great strength was that in a sea (sorry) of male authors she was a woman writing very fully about women.
Her brother was in the Navy, and she writes so well about it. See the website:http://historicalhoney.com/jane-austen-sea/
At least a woman was visible focus in O'Brian's Clarissa Oakes. But the point is, of course, that the sea was indeed a very separate and male space, although exceptions were many.Far more than many writers credit. 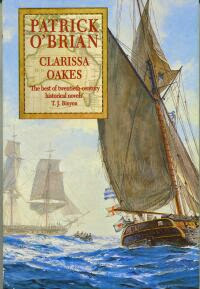