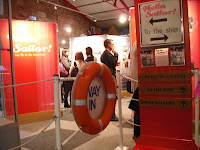 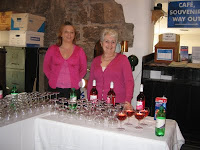 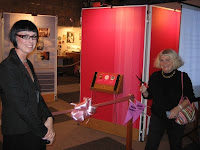 Hello Sailor! Gay Life on the Ocean Wave, opened in style in Glasgow.
Over 70 were at the launch party at the Tall Ship in Glasgow Harbour, on Friday 4 September 2009 - the biggest number to ever attend an opening night there. I got to cut a pink satin ribbon to declare the exhibition open, which was great fun (that's me, to the right of Lisa Gaston, education officer).
The staff had made a big effort. The hospitality staff had dressed specially in pink, and served rose wine and cranberry. One said 'I've been up and down all Dumbarton Road looking for pink serviettes too.' Never mind, it went off well.
Posted by Dr Jo Stanley, FRHistS. at 11:54 1 comment:

Up in Scotland last week I heard many story about (but none from, unfortunately) male submariners who formed sexual relationships in submarines. The classic phrase, apparently, is '140 men went down and 70 couples came back up.'

That was said with some homophobia - as in 'I wouldn't work on submarines because this happens.' But the point is that if men are submerged for three months at a time, then of course they are going to get together. And of course the captain is going to turn a blind eye. Indeed, some captains themselves had affairs.

Homosexuality at sea has had a hidden history. But even more hidden is the history of gay US submariners, particularly those working at Holy Loch on nuclear subs. From 1961 and 1992 Holy Loch was the home base of US Submarine Squadron 14, and used for refit and crew turnover. It would so useful if someone could retriev this 'other' history. 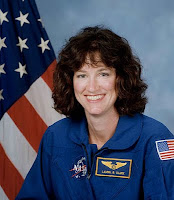 Incidentally, for all that subs were so slow to allow women crew, there was at least one in the early days: NASA astronout Dr Laurel Blair Salton Clark (1961-2003) worked at Holy Loch around 1989-92, dived with Navy divers and SEALs, and made many medical evacuations from US submarines. She was a Naval Submarine Medical Officer and Diving Medical Officer. See her wikipedia entry.
Posted by Dr Jo Stanley, FRHistS. at 08:51 No comments: