What do historians do if they can't find evidence of occluded people? Some invent, judiciously.

This weekend only, you can see on line an interview with the creatives involved in a three-screen immersive film installation on constant display in London's Museum of the Home. https://www.museumofthehome.org.uk/what-s-on/exhibitions-and-installations/waiting-for-myself-to-appear/. It marks Windrush Day, 22 June 2021.

The film installation is based on the imagined 19C story of Grace Belmore Sweeney's Caribbean nurse, who accompanied her to England.

As someone exploring BAME caregivers afloat, I'm using this blog to offer information about Grace's likely voyage. However, brown and black carers' sea crossings are not part of any dramatic production, as yet.

This show is about Hackney, not the ocean. And it weaves in modern times too.

WHY THIS WOMAN CONNECTS WITH SEAFARING

The real name of this Jamaican worker-voyager is unknown. But - if she was a wet-nurse, as is assumed - she helped orphaned Grace Belmore Sweeney stay alive all the way to England. She belongs to a rarely-discussed category: black and brown women who sailed as care-givers, usually on precarious wages.

Grace's nurse may well have been of African origin, as so many enslaved Jamaicans were at that time.

African-origin carers afloat are more rare than needles in haystacks. The better-known travelling ayahs and amahs were of Indian and Chinese origin respectively. (See ayah on a later P&O vessel, below). 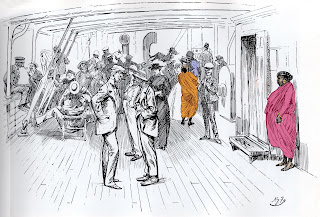 Some were wet nurses. That meant their own left-behind babies were going without their blood-mother's milk and missing out on that crucial physical bond, as Esther Niles points out.

Mostly carers were at the upper end of the 20-50 age range. Many had children, who were left behind during the voyage. An unknown number were widows and family breadwinners.

Some care-givers stayed with their employing families and looked after generation after generation. They travelled to new locations with them, for example on furloughs 'Home' or when military sahibs were sent to new bases. The families care-givers had to adjust to being obligatory itinerants in order to keep their job.

What was Grace's carer's voyage like? It's not recorded. But there's plenty of contextual evidence.

She was aboard an unnamed ship, almost certainly wind-powered. It brought her the 4,705 nautical miles to Hackney in the late 1830s, just after slavery was abolished.

Voyages were so long that some carers weaned the babies in that time, especially if seasickness dehydrated the women so much that they stopped lactating.

Grace and her carer would have undergone a five-to-eight week voyage, or more. Speed depended partly on the state of the ship, weather, currents and winds.  Going from Jamaica to Britain the winds were kinder than on the Britain-to-Jamaica trips.

She'd almost certainly have travelled saloon class, as she was with a white, not brown, child. They'd have slept in the Ladies' Cabin. Maybe 8-10 others were there, so a carer's job included shushing crying babies to avoid other passengers resenting the disruption.

If very lucky their ship would have had a ladies-only lavatory (opening into the sea), not chamber pots. The cook's co-operation would have been crucial if Grace had switched to solid food. And sailing with a crew who liked children was always a bonus; carers felt less alone with their burden.

The Museum of The Home (formerly the Geffrye Museum) in Shoreditch is to be commended for putting this unusual story of BAME women in the public eye.