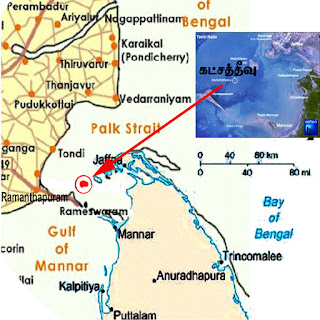 On Sunday Usha, a 34-year old woman from Trincomalee in Sri Lanka, attempted a water-borne solution to the domestic violence her in-laws were apparently inflicting upon her. She ended up inadvertently precipitating an indefinite strike by over 4,000 fishermen and 800 boats.
The Times of India today reported the event. It seems from early evidence that Usha used the St Antony's feast on the islet of Katchatheevu as a way to get away to India.
She joined the 3,700-odd pilgrims from Tamil Nadu and about from 2,000 Sri Lanka who were ferried there for the day’s celebrations.
Usha and her child Neera were found stranded on the islet after the feast. She told authorities that she was from Rameswaram (India) and that the fishermen who had brought her there had left, unaware that she was not on board, and she needed to get ‘back’ to Rameswaram. A number of people, including naval authorities, believed her story and helped her get on a boat ‘home’.
When she arrived in India marine police arrested her and the men on the boat. Later police in Mandapam found she was a ‘run-away.’ The five fishermen who helped her have been detained, charged with violating the Passport Act.
It is in protest against the accusation that they had assisted illegal entry that the strike has been called. The men see themselves as innocent but duped parties who thought they were simply being helpful.
The point, really, is not that Usha is now regrettably incriminating those who helped her, but that domestic violence is so hard to escape. If the victims of it were more adequately supported they wouldn't have to take such desperate steps.
For more see http://timesofindia.indiatimes.com/city/madurai/5-held-for-ferrying-Lankan-woman-to-Rameswaram/articleshow/12155896.cms
Posted by Dr Jo Stanley, FRHistS. at 02:51 No comments: