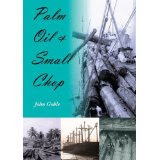 Palm Oil and Small Chop by ex-seafarer John Goble, is a new autobiography that reveals much about the racialised British attitudes of seafarers sailing the West African coast in the late 20th century.

John Goble was a mate, chief officer, then a relieving master with Elder Dempster, (and later Palm Lines). His ports included Apapa, Takoradi, Dakar, Freetown, Port Gentil, Bathurst, and Pointe Noire. On the cusp of containerisation, he supervised cargoes from palm kernels to calabar beans, pigs’ snouts to missionaries’ generators.

I've just reviewed this funny, erudite, elegantly written book for the International Journal of Transport History. In it I write:

"This is a world where deck officers knew minutely when blind-eyes had to be turned. For example, Goble was pulled up by a smuggled Nigerian seafarer’s lady wearing a ship’s bath towel. ‘Oi, are you in charge ‘ere?… Well, there's no effin’ hot water again down aft’.

"Does he say ‘What are doing on board our ship?’ Not at all. He politely murmurs that he’ll get the engineer to see to it. Nor does he rise to her admonishing final shot: ‘… and dey were all on the 'effin repair list last trip an' all.’

"Ironically, it’s the thing that Goble writes about with most discomfort that will make it particularly important for future generations: race relations. Goble frequently acknowledges and apologises for the way white crew and officers – including himself - talked to and about Kru seamen (tellingly referred to as Krooboys) and disdained ‘nig-nog grub’."

So it is the horse's mouth - and can usefully be read along with Diane Frost’s insights into Kru seafarers' lives: Work and community among West African migrant workers since the nineteenth century, Liverpool University Press, 1999.