Women in the ship's surgery - imagining 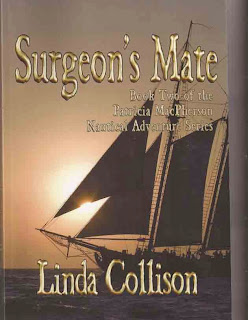 If there were any before the 20th century they’d have been disguised as men, as was James Barry (although s/he was not working at sea, just in the army.

In the absence of hard evidence Linda Collison has imagined a woman in such a position. Patricia MacPherson, the heroine of Surgeon’s Mate, wields the lancet first on the naval frigate Richmond and then on the cargo ship Andromeda in the 1760s.

Very plausibly this novelist, ex-nurse and sailor uses her modern experiences to help us see just how ‘Patrick’ got away with being a woman. We also see the range of responses from shipmates at the revelation that ‘he’ was she: a freckled, big-boned, sparsely-endowed imposter – and very adept at her job.

Perhaps the most interesting twist was when ‘Patrick’s’ rival for promotion tries to shop Patrick, who he suspects to be a gay man. He organises a raid, only to find that in fact, Patrick was being temporarily a silk-frocked Patricia with her heterosexual true love, the gunner in his candle-lit cabin. 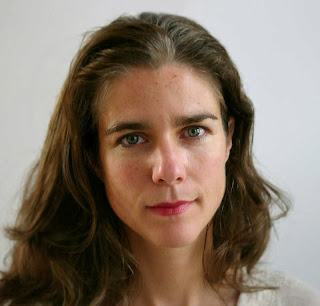 
Rebecca Gomperts(above) is the most unusual doctor at sea today. On her ship, in neutral waters, she offers safe abortions (and contraceptive advice) for desperate women who have no legal alternative. See the website, www.womenonwaves.org.

It's another - and small, and woman-focused - version of the huge Mercy ships that offer health care off the coasts of underdeveloped countries. Volunteer doctors and nurses give months of their lives for such charity work.

Diana Whitten's documentary about Gomperts, Vessel, has just (March 7) had its world premiere at the South by Southwest Film Festival in Austin, Texas.
You can see a clip at
http://www.hollywoodreporter.com/news/sxsw-video-vessel-follows-activist-686347.

This still picture from it shows a crew member in negotiation with coastguards. 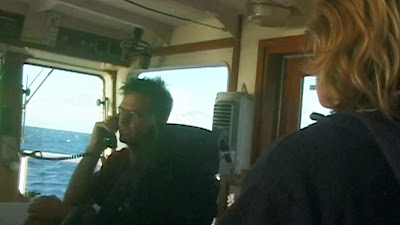