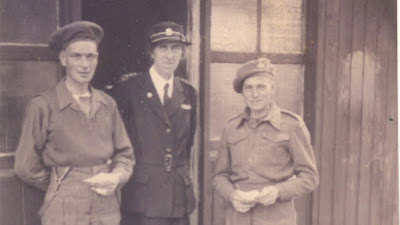 Helen Beale (1885-1972) was one of the Royal Navy women allowed the vote for the first time in 1918. This important figure in Women's Royal Naval Service history was over 30, therefore she was eligible to have her civic say.
A hundred years ago this month it was an exciting time for her. Helen enrolled into the brand new WRNS on 28 January 1918, age 32. She was one of the first tranche; it had only just begun.
Then, only nine days later, she got the vote, along with possibly a thousand other Wrens. 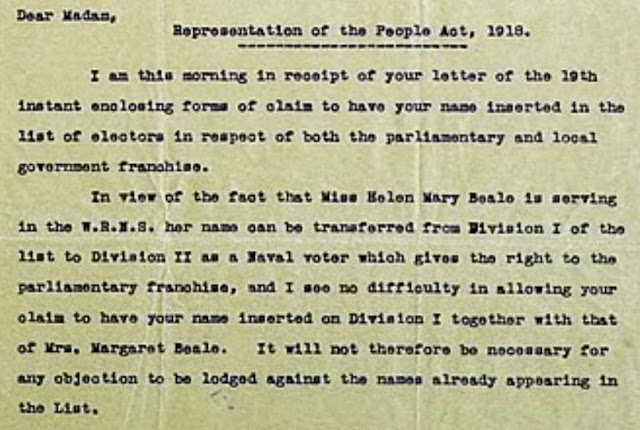 VOTING RIGHTS
Many Wrens did not qualify because they were were too young,or not property holders or graduates.
For example, Vera Laughton Mathews (pictured right), a WW1 counterpart of Miss Beale, was a suffragette.
Vera became Director WRNS in WW2 and remembered that 'when the first limited measure of franchise to women was passed on February 6th, 1918, I was extremely annoyed to find myself excluded,'(Blue Tapestry, p29). 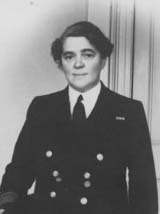 Age 29, Vera was just seven months too young, having been born on 25 September 1888. Also she did not have the requisite property qualification, nor a degree.
Vera, like most women, had to wait until the 1928 Representation of the People (Equal Franchise) Act was passed.


The letter (pictured above) about Miss Beale's status as voter is part of the new National Trust exhibition about her.
The exhibition is on display at her family home of Standen, near East Grinstead in West Sussex. 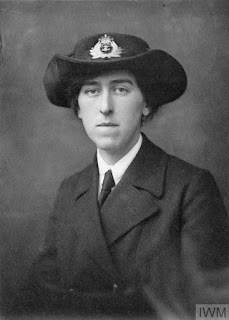 HELEN BEALE'S STORY
Helen (pictured right) is significant in the story of women's naval life because not only was she Divisional Director at Devonport, and therefore one of the nations' six regional on-the-spot organisers of the WRNS.
(She attained the post just seven days before the Armistice, 4 November 1918 and carrying on until the very last: 11 November 1919.)
Miss Beale was also one of the very best writers in the entire service.
Her records, and her letters to WRNS Director Dame Katharine Furse (pictured left, below) are vivid and invaluable evidence about the teething problems of being a women's auxiliary service. The WRNS was hurriedly created mid war and worked round the traditional, male and sometimes misogynist permanent service. 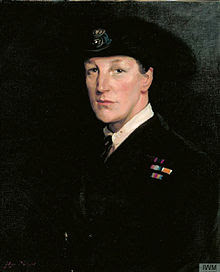 Helen and Katharine had been together in the VAD before the WRNS began. This shared history, and having transitioned to the WRNS together, enabled them to write very frankly to each other.
They may also have felt a subtler affinity too, as they both shared the same tall, angular body type and authoritative style.


~ Helen Beale's file can be digitally viewed via the National Archives (TNA ADM 318/21) if you pay £3.50.
~ Her letters and reports can be seen at the archive of the National Museum of the Royal Navy.https://www.nmrn.org.uk