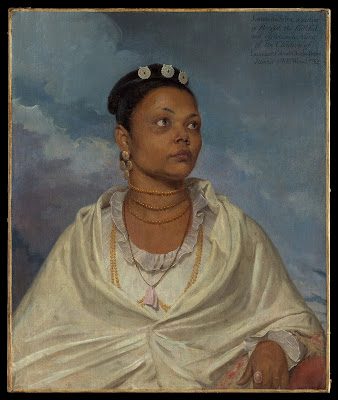 Pioneering explorer Vasco da Gama  was, of course, famously Portuguese. (And while he became the first European to 'discover' a route to India Catarina, his wife, stayed home looked after the seven children, presumably with an ayah's help.

But I’m just beginning to discern another –  hidden –  Portuguese travel story: the extent to which Portuguese-origin women from India were a different, domesticity-centred kind of pioneering early voyagers, four or five centuries later.

Travelling ayahs and amahs are the world’s first women of colour to be female travelers, as this blog has shown.

Now very new research is revealing that they might have been predominantly from places developed by the Portuguese who followed in da Gama's footsteps This is especially true of women who lived in what is now called Goa and Sri Lanka.

William Wood's 1792 portrait of this Bengal ayah, Joanna de Silva, (see pic) helps the story evolve. The painting has just been acquired by the Metropolitan Museum of Art in New York. 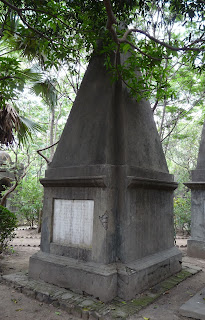 Joanna, whose surname sounds Portuguese, looked after the children of Catherine  and Charles Russell Deare. He was a Lieutenant Colonel in  the East Indian Company.

Both lost their lives in 1790, age 40 and 34 respectively.  Catherine died a few days before Charles was felled by a cannon shot at Sattimungalum. They are buried together in Kolkata (see pic). Charles' military career can be perused at: https://www.gutenberg.org/files/59595/59595-h/59595-h.htm#

The Deares had been based in Calcutta  (a place where many Portuguese descendants lived, as did da Gama himself). And Joanna appears to have gone back to England with the children, who seemingly were to be looked after by his brother Phillip.

That was a relatively common pattern: the beloved ayah was so central in providing 'her' children with stability after a parent died, that she effectively emigrated. She took her charges 'Home'  and then looked after them in Europe, far from her own family.

Joanna‘s voyage to England would have been on an East Indian Company sailing ship round the southern tip of Africa. In challenging conditions aboard she’d have been looking after the orphans for about six months. She was lucky to arrive. Not all ships made it. Not all ayahs, memsahibs and babies survived voyages in that time.

You can read the fascinating story of Joanna’s portrait, which my colleague Swapna M Banerjee (pictured) has just written up: She Travelled: The Portrait of Joanna de Silva, the Indian Ayah at the Metropolitan Museum of Art, New York.  https://bit.ly/METDeSilva 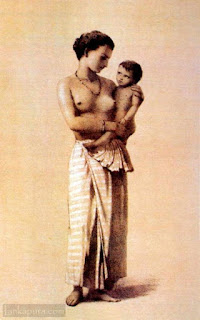 Joanna was one of the path-breaking Portuguese-origin ayahs who were mobile. Many historical texts refer specifically to 'Portuguese ayahs'  or 'Singhalese amahs' as if that cultural identity mattered very much.

The unlikely and eroticised image (right) is of Agostina, a 13-year-old Singhalese low-caste girl who worked as an ayah in a native house in Pelmadulla, Ceylon, c.1867. In that period Portuguese domestic workers were commonly seen as sexually available.

Since Joanna's time thousands of ayahs and amahs have traveled the globe. Surely the nervous newbies venturing on the undertaking were helped by knowing that they had predecessors such as Joanna.

If you look at the passenger lists  (now available online) you will see that an astonishing number of these mobile ayahs had Portuguese-origin names, spelled in varying ways.

In fact the two best-known ayahs on the India-UK route happen to be called Perara or a variation of that name:

Tracking down every floating ayah  who had a Portuguese name is a research job for later. But as a test I looked up the passenger lists to find all the inbound and outbound ayahs called something like Pereira. I found an astonishing number: 29. In the period 1908 to 1934  were at least:

29 out of 721 is statistically significant: four per cent. So what will a study of other Portuguese-named ayahs – such as da Silva  – reveal, one wonders.

It is well-recognised now that there were a few travelling ayahs (frequent sailors) and a lot of regular ayahs who went everywhere with the employing family, as a Filipina maid might today.

As I researched I keep wondering about all the many Pereras among the very mobile ayahs:

~  ls this coincidence?  Surely not.

~ was there a dynasty of travelling Pereras  who had cornered the market?  A bit of a 'Dial-an-intrepid-ayah' service or a network known to shipping agents?

I've now realised that the answer is bigger than that.

Portuguese-descended ayahs tended to be Roman Catholics. This meant they had a more relaxed attitude to travel and to religious prohibitions about food than did some Hindu and Muslim ayahs. They wouldn't lose caste if they voyaged.

It's likely that memsahibs in search of travelling ayahs selected those who'd be the most flexible supports. And maybe, too, RC ayahs would market themselves as  especially able to cope with ocean vicissitudes and on ships without galleys catering for particular dietary rules.

In addition, the Portuguese were known as trustworthy couriers of European travelers from the 1600s. This meant that ayahs were part of a culture group  characterised as ideal working escorts.

And an ayah’s work could take her to all sorts of iconic places.

In 1932 one of the Caroline Pereiras was sailing with Ceylon tea planter William Waddon-Martyn’s family. With Mrs Sheila and the two-year old twins, Caroline seems to have been briefly lodging in Dorland, Yelverton, while the crumbling, ancestral home, Tonacombe Manor in Devon was rented out.

She was 47 and a British subject, planning to settle back in Ceylon after they left the Marnix van Sint Aldegonde  (pictured),  at Colombo.

Caroline would maybe have known the haunted medieval house, which was where author H Rider Haggard wrote some of Westward Ho!

Watch this space for the latest news of the extent to which Portuguese-origin ayahs dominated the domestic-couriering business. How many more ayah de Silvas might there have been?

These women’s’ voyages didn’t pave the ways for empire building – as Vasco da Gama’s had.

But they certainly did unusual exploring, as non-white women. Their fortitude deserves recognition.