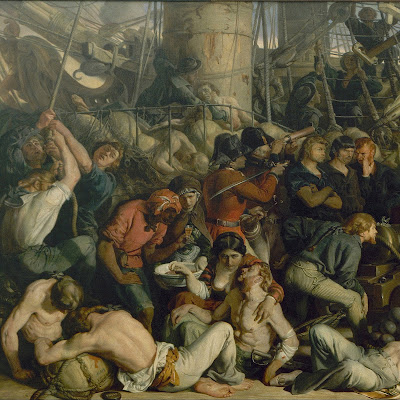 (Black seafarers were part of the crew. Racial mixing and integration was normal, as this image by Maclise, The Death of Nelson, indicates.)

Race and the Sea is something maritime historians in the UK are giving attention to.

Liverpool's Centre for Port and Maritime History is making an important step towards making research visible by organising a conference on this theme on September 15, 2017 at Liverpool John Moores University, UK.

"Since ancient times peoples of different races have enjoyed a relationship with the sea. This has included trade, exploration and the pursuit of empire. We seek to better understand the relationship between race and the ocean." say the organisers.

For more information go to: http://events.history.ac.uk/event/show/15776

Women in relation to race at sea can be found on this blog using the search terms 'race' and 'black.' For example, the UK's first black woman cruise ship captain was Belinda Bennett in 2016. 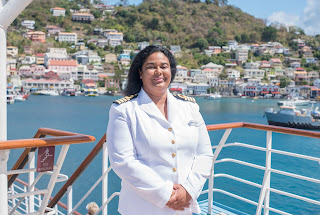 And the tragic loss at sea of Akhona Geveza (was she murdered to shut her up or was it suicide?) after her sexual harassment allegation can never be highlighted enough. (pictured below left)
.