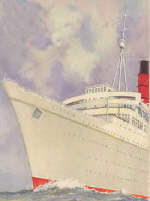 For seafaring men who liked donning glam frocks Cunard’s Caronia II was The Ideal Place To Be in the 1960s.

Whatever their sexual, gender or relationship identity, seafarers added extrinsic pleasure to their work aboard such luxurious cruise ships.

Fortunately such images are still readily available online. Peter Stevens’ rich Caronia website has the most – both in colour and black and white. See at Steve's site

Frisky and outrageous camp shots appear in the context of the Caronia's  huge illustrated timeline, with its parallel strands of crew life and the ship’s voyages.

As a mere lad, Steve, as he’s called, long before he began this website, was a commis waiter on board the Caronia 1964 into 1965. After a spell working abroad he rejoined as a first class waiter on the 1966 world cruise.

“When I left school I was so green I could have successfully hidden undetected in a cabbage patch. So, meeting effeminate men at work, and encountering their open expressions of sexual preference, came as quite a shock. I was not a little embarrassed!

“Next stage was coping with 'gay' men who were not so 'camp'. Talk about adults being totally bewildering!

“Then there was their secret language to cope with. In Polari they could, apparently, bring you down a peg or two. After a while, I treated Polari like I'd learned French, on the basis that the only point in doing so was to be able to swear back at any Frenchman, in his own language.

“If someone wants to 'clean' me, then I wanna know - exactly - what they're saying, even if I do end up a nervous wreck. Even to this day, I'd think twice before taking on any queen! 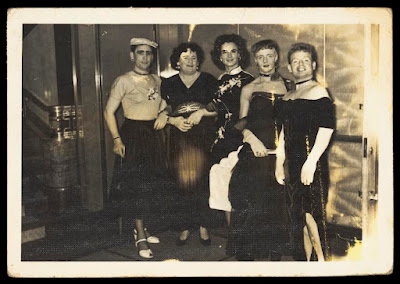 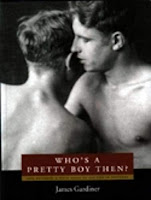 They’re part of James Gardiner’s collection, which he created for his 1996 book Who’s a Pretty Boy Then? (Serpent’s Tail, London. Sadly, it’s now out of print.)

But seafarers were sometimes aboard a fresh vessel every trip. That means their collections reveal the gay subculture on their many different ships, including the Andes ('the Queerest Ship Afloat’). 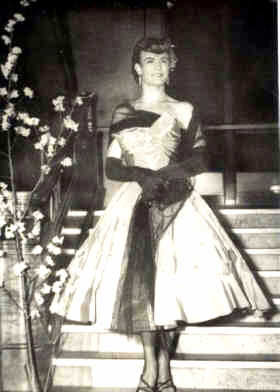 It’s unusual to find collections focused on just one ship. So these visual revelations of continuous life on the Caronia are precious.

And they’re extra-precious because they reveal how very high the standard of cross-dressing was. Never before have I spent so much time peering at impeccably beautiful ‘women’ and thinking ‘Surely that can’t be a bloke?’ Take, for example, waiter Lana (Allan Horsburgh) here in a photo shared by Ave Quin.

Catch 16 substantial references to LGBT life on board, including the gay scene, the crew variety shows, a mincing laundryman, a 1962 Sandringham Parade queen, and a  tongue lashing in Polari.

There’s a search option ‘LGBT’ and much rich material on the September 1965 page and the October 1960 page. You can also find gay life at:

Professional shots of campery at sea are usually about shipboard theatricals. By contrast, the amateur shots tend to show cabin parties, frivolity in corridors, and shore excursions.  The 1960s Caronia images follow this pattern, too. 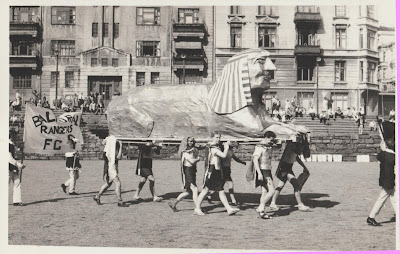 Many pictures were taken and donated by seafarers such as Roger Birch and Ave Quin. For decades Steve has also been assiduously buying Caronia images from all over the world. The result is that we can now see camp life as part of the ship’s life, not exceptionalised.

And unusually we can also see the ship’s camp culture extending – seemingly non-problematically – into life ashore.

The Caronia annually called into Bergen where football teams made up of waiters from Sandringham and Balmoral, the ship’s two restaurants, played each other on a local pitch. (Unlike aircraft carriers, cruise ships didn’t have enough deck space for matches.)

Each team had its supporters club. They planned a new theme for each year's parade through the city. The day was filled with pageant. Seafarers in crazy costumes paraded as if skirt-wearing was just innocent fun, not an exploration into gender transgression.

July 1964. The jolly camp day that's beautifully revealed by the Caronia website is the 1964 North Cape Cruise event. The theme was Cleopatra. Not just any old Cleopatra but Cleopatra as played by Liz Taylor in the hit movie released the previous year.

In their spare time supporters of the Sandringham Restaurant crew had made a float featuring a huge papier maché sphinx mounted on gold-painted pallets, held aloft by ‘slaves’ in togas.  Engineers' steward Denzil ‘Pagan’ Norton posed as Cleopatra. 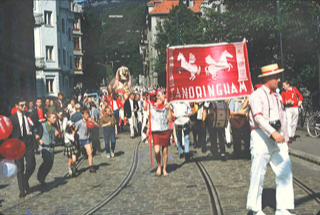 For Pagan it was a day of stardom. He Luckily Steve can remember it all. He was one of the poor souls in togas lugging the heavy float through the port’s cobbled streets. 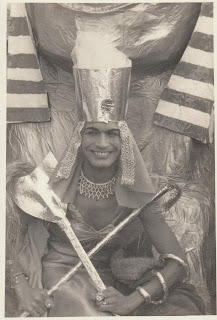 Photos of camp theatricals at sea are relatively available because bigger passenger ships carried a ‘floatographer’, sometimes two. They were employed by agencies such as Ocean Pictures and Marine Photo Service. 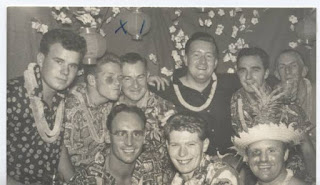 On and off duty, these concessionaires photographed everything that would be lucrative. Some had an anthropologist’s eye. All knew how to compose a flattering shot.

Before the age of selfies, skilled ‘floatographers’ customers included femme crew who wanted to be recorded at the apotheosis of their transformation into stars of the below-decks hedonistic world.

These many resulting professional 10”x 8” B&W shots are a fine foil to that other genre: amateurs’ colour shots. These were a low-resolution informal record, and faded all too soon.

It’s possible that the onboard photographer also developed risqué snaps taken by gay crew, who feared they would be reported and prosecuted if they sent their photos to Boots (the usual way films were processed at the time).

SOS: Save these snaps

It’s so important that these images are kept for posterity - and restored if needs be. Steve has worked hard to make some faded colour slides viewable.

"After 20 years of collecting and assembling a website I've realised that I've created quite an archive in its own right.

"Along the way visitors have sent me many, many instances of often heartfelt feedback. These add still further to the richness of the social history records that the site has quietly amassed.

"Then came a steady stream of growing shocks.  Several websites that I have enjoyed over the years are suddenly no more!

"Other sites are being 'rationed' as owners succumb to the inevitable process of reaching their twilight years.

"Is this the fate that will eventually befall my Caronia Timeline? At this moment the risk is very real!

"I've found that anyone and everyone will happily accept my paper archive. They would do, wouldn't they!

"But Instead, I've found that public bodies regard making any kind of commitment to maintaining the website as a step too far.

"If almost every piece of ephemera collected brings an aspect of the ship's history to life - and if viewing images of these saves endlessly rummaging through the originals - which is the more valuable: The archive or the social history?  More on this on Wot's New on Steve's site 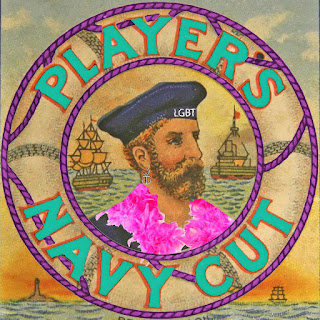 Celebrating the first ever Pride in Maritime Day on Feb 28, 2022. https://www.maritimeuk.org/events/events/pride-maritime-day/
Let's join with all the LGBTQ+ seafarers and their allies ashore and afloat to mark this fine day. Maritime UK is leading the initiative. 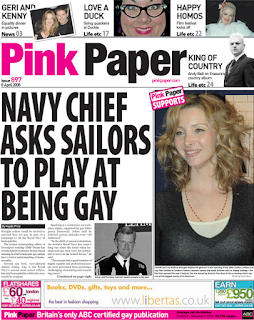 I'm proud to have been part of revealing the brave and tragic history. If you want a quick taster about the challenging gay maritime past that led to this now-proud present, try:
# Seeing my zoomed whirlwind tour talk about this history, step by step, 1600-2000 at bit.ly/queermarhist. It includes cross-dressed women whose relationships may have been non-heterosexual, like shipwright Mary Lacey (pictured below).

# Browsing my reading list of books and articles about queer seas, at  www.academia.edu/37107492/Queer_Seas_bibliography_doc
# Reading my (lite, illustrated) introduction to the subject at http://www.jostanley.biz/the_sea_and_lgbtqi.html

I'm celebrating 20 years of researching, writing and explaining about this subject. This period was prefaced by me thinking for over two decades before that, 'Somebody's got to write up this history. But it should be written by a gay seafaring man, not me.' 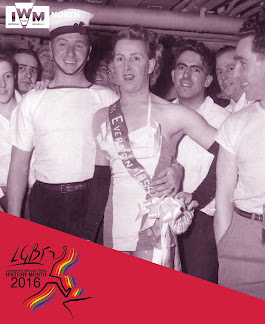 Finally I went ahead. You can see what I've written up by looking at:
# my articles: get links via http://www.jostanley.biz/the_sea_and_lgbtqi.html
# the "Hello Sailor" exhibition that Merseyside Maritime Museum mounted, then toured. See the Youtube tour of it at bit.ly/HomotopiaHello
#  the seminal book Paul Baker and I wrote:  "Hello Sailor, https://www.proquest.com/docview/2132054178/$N"
# my blog on gender and the sea: https://genderedseas.blogspot.com/

You can help by joining in 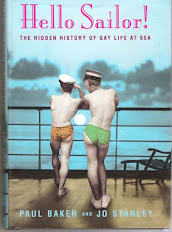 Do you want to take part in a rainbow seas history network, exploring the diverse maritime past?
A few of us in maritime museums throughout Europe are thinking of getting together for this purpose.
If you want to talk about joining in please contact me privately via my website, www.jostanley.biz
Posted by Dr Jo Stanley, FRHistS. at 09:04 No comments:

This is a free online international conference being run by University of Ljubljana 9-11 February 2022.
It's not about mermaids but real women in maritime  business and labour in the last 200 years. They include ship owners, dockworkers, wives, fish-canners in Yugoslavia and Spain, and waterfront sex industry workers.
For details see https://www.wecanit.eu/wp-content/uploads/2022/01/MERMAID_Programme.pdf.
No need to register. The zoom link is already there.

Catch a programme that includes includes:

KEYNOTE LECTURE by Valerie Burton: 'Re-Presenting Women’s Maritime Past: an Historian’s Keynote for the Mermaids Conference' 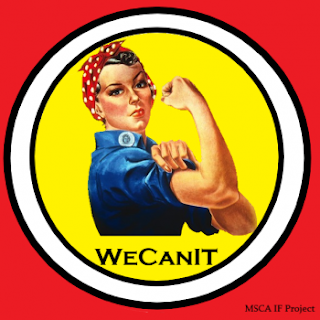 The conference is organized in the framework of the MSCA-IF Project 2019 “We Can Do It! Women’s labour market participation in the maritime sector in the Upper Adriatic after the World Wars in an intersectional perspective”.