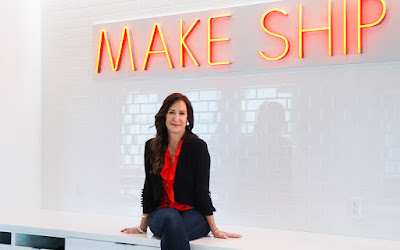 This is a straight lift of a Virgin article, 11 Jun 2019 (with just some sub-headings and pix by me, for readability).

I think the article is really interesting because of the way this woman captain - yet another to join the ten-plus in the cruise ship industry -  is applying emotional intelligence to the once patriarchal business of leading the shipboard team.

Fascinatingly, Wendy Williams has been in the very hard work of fishing - as few UK women have been at all. No other women cruiseship captains have come from this gruelling industry.

Her adults-only ship, the Scarlet Lady,  is Virgin's first cruise ship. You can take a virtual tour of the ship here 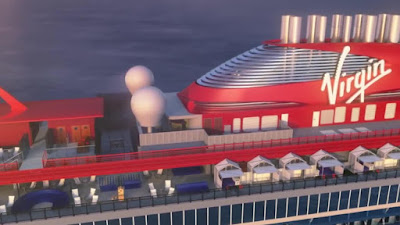 The only thing that is going to limit you is your own imagination. A piece of advice Captain Wendy Williams’ parents gave her when she was a child, that she’s always held close.
“Their message was that you can do and be anything you imagine,” she adds, “and I've always believed in that.
"You don't have to be limited by anything.”

As it turns out, they were right. Her imagination was vast, focused and driven, guiding her through a successful dream career at sea, where only under three percent of the world's mariners are female. That journey has led her to this moment, as she takes on the first captain role for Virgin Voyages’ premier vessel, Scarlet Lady, making her the first Canadian woman in history to captain a ship for a major cruise brand.

“If you're the heart of the ship and your heart’s in the wrong place, then you're not going to have a good ship. I’ve always been known as the captain with a heart.” she says about her approach to her new role, “I intend to be the best captain I can be and love every moment of it.”
Born in Sept-Iles Quebec, on the Northeastern Coast of Canada, Captain Wendy is certainly no newcomer to the sea. She has spent the larger part of the last three decades on the water, in different capacities.
“I’m pretty sure I have sea water in my veins,” she says about her upbringing.

Commercial fishing was her first career at sea, starting out as a deckhand, then an observer and eventually working in all capacities, for her own vessels. During that time she became enamored with the sailing of the ships themselves and began to move in that direction.
She credits that background with giving her the confidence she has today. “Fishing brings you very close to the weather and how it changes,” she said, “I’ve learned a lot about reading the weather from being on a fishing vessel.”
After battling that very grueling industry for about a decade, during which time she met her husband, they decided to go to school together at The British Columbia Institute of Technology (BCIT), Pacific Marine Training Institute, located in North Vancouver.  (Pictured) 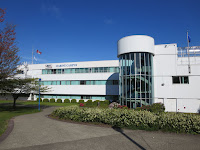 Soon after Captain Wendy began her cruise ship career, still only one of very few women in the industry at the time.
Though she has captained many vessels in her career and was a Staff Captain for 6 of her 15 years in this industry, this Virgin Voyages role will be her first time mastering her own cruise ship.

NO GENDER ON THE BRIDGE

“I think we're making amazing strides now,” says Captain Wendy about women in mariner roles. “When you walk onto the bridge you don’t have a gender. You’re a mariner. You’re an officer, this is what you do.
"This is what we do together. There should be no bearing on what our gender is. And that's the kind of bridge that we are going to have. There's no space in our day to have gender bias.”
Captain Wendy says her primary focus at Virgin Voyages will be on crew. “While structure is of utmost importance for safety and order on a ship,” she adds.
“I'm driven to embrace inclusivity and set an example that all people should be treated with respect and integrity.”
A deep love for the sea drives all she does, and she’s described a life at sea as her calling, “For me, the sea is my religion. It’s where I think. It’s where I have clarity. I’m not afraid of it and I’m respectful of it.”
When this position with Virgin Voyages arose, she had been looking for a fresh perspective on the sea travel industry, which is why this partnership feels so destined, both for Captain Wendy and for the team at Virgin Voyages.

“The whole thing for me is that [at Virgin Voyages] we’re going to do it differently,” said Captain Wendy, noting that she was drawn to the brand because of a shared drive for treating the sea with care and respect.
“I’ve encountered people in my career who feel being kind and smiling is a sign of weakness, but I believe it’s my greatest strength,” she says about her thoughtful approach to all she does.
“I have to care about everyone and everything. I’m the Captain.”
To that, we can only say: Aye aye! Welcome aboard, Captain Wendy!

This article is at https://www.virginvoyages.com/ahoy/stories/captainwendy?utm_medium=email&utm_source=email&utm_campaign=captainwendy