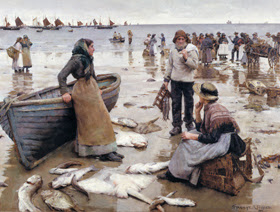 On Monday May 12th there's a symposium: British Waters and Beyond: The Cultural Significance of the Sea since 1800, at the Royal West of England Academy in Bristol. http://www.rwa.org.uk/whats-on/events/2014/05/poweroftheseasymposium/

But what's the cultural significance of the sea for women? To me - and I'm not giving a paper on it, as I've been too busy - it's that the sea was:

# a place inhabited by male seafarers,: the sphere implicitly termed 'Rugged Masculinity'
# the site of an industry that women were expected to support but to only join in limited roles e.g. net-mending not fish-catching, stewardessing not engineering
# the widow-maker, the force that shaped their lives, yet something women were largely encountered from a distance or by proxy
# of course, a force associated with Woman's/Nature's unruliness (and stirred up by any women who had the temerity to venture on it, even as passenger).

Of course, this was very different at different times in history. It was absolutely affected by class position, race etc.

It seems that the sea was often rather hypocritically gendered: it was called 'no place for a lady', but actually working-class women supported activities on it and lived off it. And ladies actually were owners and the models for muse-type figureheads of ships, but often formally excluded from anything like an equal - or any - place on board.

From the symposium programme, it appears that at least one paper is about women and the sea, and somewhat about gender. Mary O’Neil from Oxford Brookes University) writes this summary of the paper she'll be presenting:‘A “white-aproned sisterhood”: representing Cornish fisherwomen’
-- 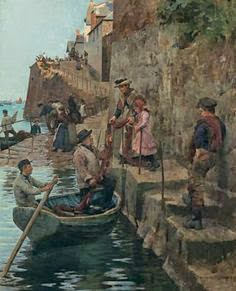 REPRESENTING CORNISH FISHERWOMEN
'Late nineteenth-century representations of coastal women focused on their healthy beauty and neat, plain attire. Nostalgia for a picturesque rural life ...intensified at the turn of the century. [It]was evident in the attitudes to feminine dress that contemporary writers and artists revealed in travel writing, art criticism and personal correspondence.

'Naturalist artists in Cornwall chose ‘real fisher-folk’ as their models. They placed them in ‘authentic’ coastal settings, at work and at leisure. They constructed an image of West Cornwall that fulfilled metropolitan expectations of a simpler life rooted in traditional values.

'Artistic selection sustained the Cornish idyll in the face of challenges from an encroaching modernity and from visceral realities of fishing life.

'Stanhope Forbes [1857-1947] rejected the citified fashions adopted by Newlyn women as inappropriate in their maritime surroundings. Patrons and viewers expected paintings ‘whose society they could enjoy’.

'Contemporary photographs documented the fisherwoman’s work. But pictorial equivalents are rarer. [Sir George] Clausen had encountered hostility to his naturalist representations of female agricultural labourers for a reason. 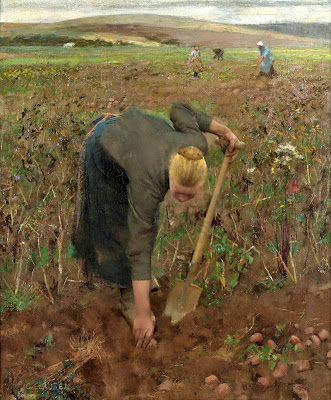 'Artists negotiated such constraints by representing Cornish fisherwomen as:
• fresh-faced young women in interior settings, fulfilling domestic and maternal roles, often working on the nets, the signifiers of their maritime identity
• working women waiting for the boats, at beach auctions or processing the catch
• ‘traditional’ Cornish fishwives (older women wearing distinctive occupational costume), whose image had both regional significance and a tourist value beyond West Cornwall.

'Finally, I consider Newlyn women’s self-presentation as a contrast to such imagery. 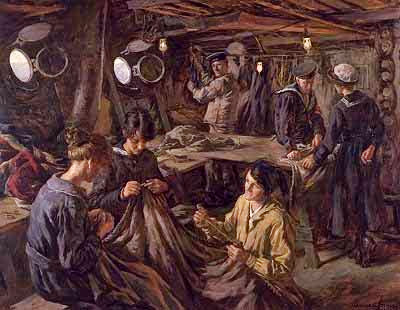 GENERAL PATTERN
It seems that Mary's paper will illustrate the wider gendered maritime picture that generally applied until the 1970s: women are by the sea, not on it. Wives and daughters are helpful to the chaps who sail but do not actual try to be on board. And Stanhope Forbes was painting WW1 Wrens in a similar - though charming - way.

When they appear in sea imagery it's not as active on-board workers. Nor as realistically stressed-out impoverished dependent auxiliaries ashamed of their ragged clothing. Nor as women with agency choosing to wear stylish and modern - even outrageous flapper-style - clothing.

Women are presented as being in a very distinct gendered binary of woman on shore versus man at sea. They do do a lot of waving Him off supportively from the headland. Very picturesque.

But actually as many as a thousand women were working as seafarers when these nostalgic (and saleable)representations were created. (Fish-catching, even today, remains a largely male job, though it's easier for women to succeed if they are boat-owners and from fishing families, as several now are.

Every time I see these Cornish images - they're on popular postcards there - I wonder if local women said to each other 'Quick, here come those blinkered London artists. Better get your old pinny out of the rag bag if you want to make some money posing. Cover your marcel wave up with this headscarf, girl! Flashy patent leather boots! Nah! Swap 'em for your gran's clogs! Now, none of that lesbian stuff here, these types can't cope with us being anything other than heterosexual, never mind their own proclivities. And scrub that mascara off or you'll never get the job.'

I guess the key question is 'what was in it for artists to represent women in this way?' The answer has to be 'sales'. Sales to buyers whose preferred version of the non-urban included quiescent outdated figures, definitely not suffrage fighters, definitely not the anticipated women captains.

The symposium is organised in partnership with Leeds Metropolitan University and Oxford Brookes University. 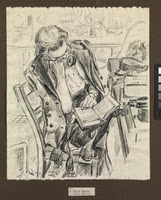 Gladys E Reed has given the world some of the best images ever of life in the WRNS life. Her newly-acquired sketches, maianly of women personnel) are on display at the National Maritime Museum till 15 July.


The Museum says:
'She joined the Women’s Royal Naval Service (WRNS) in 1943. From February to July 1943 she was in the Woolwich class and trained at the coding school HMS Cabbala, a shore base near Warrington for wireless telegraph operators.

Between 1943 and 1944, Reed worked as a Wireless Telegraph Operator in the Liverpool and Birkenhead area, and was stationed at the shore base HMS Eaglet, Liverpool, the flagship of the Commander-in-Chief of the Western Approaches.

In her off-watch time, Reed kept a sketch record of the work being done by the WRNS, mostly drawn in 5B pencil on cheap paper.

She apologetically wrote to the National Maritime Museum Director, Frank Carr:
‘I am afraid you will be more than a little shocked at the untidy state they are in.
'They were sketched under all sorts of conditions, have been carried wherever I have been stationed, and passed through many people's hands, so that since 1944 have become very grubby.
'I console myself with the thought that they may still reflect a little of that busy, happy atmosphere that did exist in the WRNS – especially in the “open air” categories'.

And the museum would love to to know something more about her. Can anyone help? Contact curator Melanie Vandenbrouck.

Women on British submarines, at last! 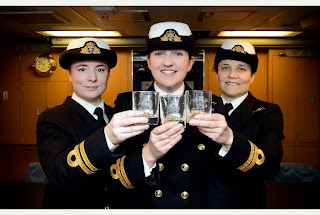 From the left: Lieutenants Maxine Stiles, Alex Olsson, and Penny Thackray raise their glasses for the traditional rum tot, with the silver dolphin badge which newly-qualified submariners have to catch in their teeth at this traditional ceremony. (Pic by Thomas McDonald, Sunday Times)

Yes, at last! The first three Royal Navy women to train for submarines have just completed their one-year training course. (And yes, there are still subs left in the fleet - 4 nuclear ones.

Now the lieutenants will serve in Vanguard-class submarines.They've just finished the final part of their training, on HMS Vigilant.

Their graduation will mean they can now go on duty for up to three months at a time, only emerging from deep sea in ports.

It's going to cost money to convert the subs. (Yes, it's the old 'Oh no, we're going to have to find space for segregated toilets' story.) £3 million. It does make you wonder why sensible people didn't design subs for any gender, in the first place. After all, Canadians have had women serving on subs for 14 years now.


REACTIONS
When the news of these plans came out in December 2011 there was a lot of bigot-blogging about 'wasting public money' and 'Why aren't they at home having babies?' Well, why aren't idiotic reactionaries at home having new brains inserted?

I hope these women give lots of interviews this week so that they educate the public about how it actually is. You're a professional. You go to work. You do your job. End of.

Defence Secretary Phillip Hammond affirmed it as 'not only a huge personal achievement for these three outstanding officers ... but also an historic moment for the Royal Navy and our armed forces.'

Women and submarines in the past.
# WW1 and WW2,: women in shipyards helped make and repair subs and their equipment, including radios

# In WW1 Wrens were pictured standing triumphantly on a captured U-boat. The image was used to rub salt into the wound,: not just captured but stood on by women!

# In WW2 22 Wrens on the Aguila were attacked and killed by a U-boat in 1941. Many of the 20,00-plus servicewomen going on overseas assignments were menaced by U-boats.

# In WW2 women didn't sail on subs, or warships.

# In the Cold War wives of submariners endured sometimes months of radio silence. They include one woman I interviewed who had had a nervous breakdown because she just couldn't cope alone with her first baby being born without support. Her husband didn't surface for months.

# They work in the submarine museum at Gosport, so they know their sub history.

# British naval women have been pressing for this stage for over a decade. Some women overseas are still prevented from serving on subs. It's a last bastion of inequality, sometimes cloaked as gallantry
--
The best women-undersea story
British women passengers probably had more experience being on U-boats than on British subs. In both wars German U-boat crews behaved with gallantry towards the women they discovered they'd attacked.

When U-156 sunk the Laconia in 1942 extraordinarily commander Werner Hartenstein took five rescued woman on board. They were given officers’ bunks to sleep on, and plenty of food.

Blanche Allan was initially 'terrified ... it was stifling inside, a long oven-like corridor of winding pipes, wheels and dials....

'We were too scared to ...[sleep] alone [and so shared bunks] Anyway it was hard to sleep because of the noise and the heat.'

They were aboard the submarine for four days and were submerged for 'two of the most anxious hours I have ever spent ... [but when finally released] the U-boat captain, still a model of courtesy, again apologised for the inconvenience caused us, and wishes us a safe return.'