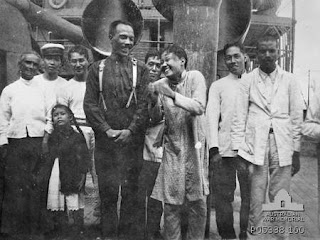 What a revelation this image is! A Chinese female shipboard worker in wartime. It's evidence of a past that is not at all visible in mainstream historiography. It shows that at least one Chinese women worked at sea despite the war. Not only that, she traveled with her child (meaning working a double shift). Not only that, both were captured by the enemy.

Women in many countries worked at sea as stewardesses throughout WW1. (Far fewer did so in WW2, in Britain at least). They faced risks of capture and shipwreck, as male crew did. They didn't necessarily count themselves as women when the 'abandon ship' order said women and children should leave first.

As the war went on ships' stewardesses dwindled in number. This was partly because of the convention that women should not be in danger zones, which increasingly meant European shipping lines replaced women crew with men. But also, so few women passengers (bouches inutiles) were allowed to take up scarce space on wartime ships, that there were no women for the stewardess to serve.

Many women were prepared to travel, no matter what the risk. They regretted that they were forced to stay home.

I've found evidence of only one British stewardess sailing by 1917. But this Chinese stewardess was sailing as late as 26 September 1917. She was on the Indian Ocean on the Japanese freighter, Hitachi Maru.

Having her her young daughter with her was not exceptional. It was a Chinese custom for seafarers to have families at sea. Many women passengers were on this ship too.

This image from the Australian War Memorial shows the unnamed stewardess and her girl among the Chinese crew. It's taken after they were all captured by the German armed merchant raider, SMS Wolf, south of the Maldive Islands.(Image number P05338.160, Photographer unknown)

After being captured crew and passengers alike had to wait a month at Suvadiva Atoll. The ship was scuttled. And they were, presumably, freed. German crew were often gallant to women and children, even at that fierce stage in the war. In some cases German crew let women go free or gave them priority.

Was this the case here? And what did the women make of an experience that is normally traumatic experience? It looks oddly matey here. Who knows. But how useful it was that a man on the Wolf had his camera with him, used it, and that the picture survives. 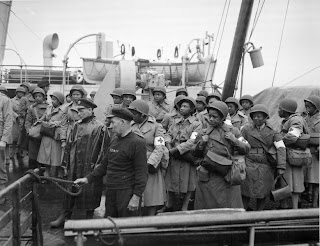