Today Joe Ousalice (68) will get his Long Service and Good Conduct medal returned to him by the  MoD. In 1993 the Falklands veteran was dismissed from the Royal Navy after 18 years, because he revealed that he was bisexual.
He says "After the court martial was completed, a guy came in with a pair of scissors and said 'Sorry, mate, I need your medal', and just cut the medal off me.'
"He added: 'The Navy wasn't just my job, it was my life. But to do it I had to hide another important part of me, which I did because I loved the navy life so much I didn't want to give it up. But I shouldn't have been asked to choose.
"'I was made to feel like I was disgusting and in the end I was hounded out on some trumped up charges, and told that because I was attracted to men, my 18 years of service counted for nothing. It was heart-breaking. It took me years to recover.


From the 1970s many people and organisations pressed for LGBT rights in the armed forces. The victory was finally won in 2000.
Liberty subsequently fought Joe's case and won it. Emma Norton, Joe's solicitor, (see pic) comments: 'It’s a great shame that Joe has had to take them [the MoD] to court to get them to see sense.
'But, because he did, he has paved the way for others to get some sort of justice too.” 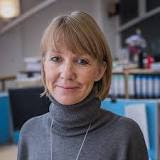 Here's a link to Liberty's press release this morning:
https://www.libertyhumanrights.org.uk/news/press-releases-and-statements/mod-apologises-and-returns-medals-falklands-veteran-forced-out
In it Joe says: “I want other LGBT veterans to know they’re not alone, and that we all deserve the same recognition.”

I don't esteem the Daily Mail, but it's carrying a longer story about this than any other paper today - and it's positive:  https://www.dailymail.co.uk/news/article-7775817/Bisexual-Falklands-Royal-Navy-veteran-Joe-Ousalice-gets-medal-returned-him.html

Using the Mail 's publicity machinery may well well help publicise and win other cases, to get the sort of belated justice Joe is getting on this day. The paper appeals: "Are you a veteran who had a medal confiscated on the grounds of sexuality? Email lara.keay@mailonline.co.uk or call 0203 615 1637." 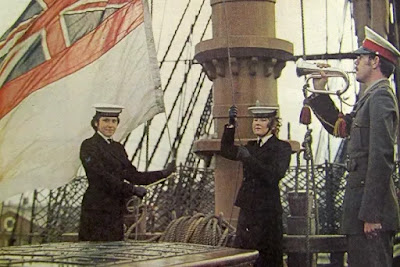 A restriction on what women could do on naval ships was lifted in 1976. The Portsmouth News on Friday 6 December 2019 reprised a celebratory article about what may have seemed significant step forward 43 years ago.
https://www.portsmouth.co.uk/retro/wrens-make-history-on-board-hms-victory-in-1976-1-9166859?fbclid=IwAR39PHBhK40GIGCe45MP_Xt-muScUvKGlg9sGr7kx_ev8cFx5iu1jL1vyIg

'A little piece of naval history was made when two Wrens [members of the Women's Royal Naval Service] raised the White Ensign on board Nelson’s flagship, HMS Victory, for the first time.
'While Royal Marines’ bugler David Butler sounded "colours", Wren Donne Lawson, 19, centre, from Scotland, and Wren Christine Tetlow, 19, from Eastbourne, raised the ensign.
'The Wrens had just finished a two-month spell of duty in Victory, acting as guides for public tours.
'This was the first time Wrens had been employed as full-time guides and they had proved popular with visitors.'

You may need to know:

# Wrens were only allowed to serve on seagoing ships in 1990, 14 years after this significant day.
# Under a thousand of the 3,000 RN women are at sea at this moment. There is still no female admiral, although the navy's equal opportunities policies are impressive these days: women certainly CAN raise flags.
# The Victory is a museum ship, and static. These Wrens were not sailing; they went home at night. But women (as seafarers' wives) had sailed in the Victory in its heyday, and in other battleships. Christine and Donne were conducting visitors around what had been women's floating homes. However, the Wrens may not have known women had preceded them. This is because women were not, at that point, much included in maritime histories. Now women's presence in Victory  is commonly known through this painting of the Battle of Trafalgar by Maclise. Mary Sperring and Mary Buick are thought to have been aboard: see https://verecunda.tumblr.com/post/64719131369/the-women-of-trafalgar 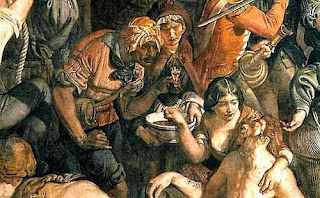 # The White Ensign is the navy's flag and has immense significance. These Wrens were handling a revered icon.
# Historically women, not men, constructed such flags in 'colour lofts' in the segregated and hierarchical royal dockyards. Like some aspects of rope making, flag-making tasks were deemed 'women's work'. Christine and Donne could well have been handling another woman's handiwork.

In other words, history is far from being a process in which women were increasingly or quickly allowed rights to participate fully in naval life. Nor have their roles and connected contributions to the Senior Service been recognised in adequately nuanced ways.