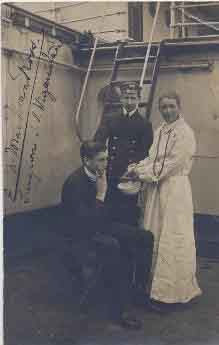 99 years ago today, on February 14 1915 Dr Elizabeth Ness MacBean Ross died in Kragujevatz, Servia (now Serbia) at the First Military Reserve Hospital.
She'd been working less than three weeks on typhus wards. It was her 37th birthday.
This very day she is still being celebrated in Serbia. And her biographer Louise Miller is there to join in.

Dr Ross broke a British precedent and become the first female ship’s doctor less than two years earlier. (The next woman doctor, Wynne O’Mara, didn’t go up a gangway to work until the 1950s – imagining she was the pathbreaker.)

SS Nigaristan
Elizabeth Ross first contributed her skills as a ship’s surgeon in February 1913 when she sailed from Madras to London on the SS Nigaristan (see picture). It’s said that she ‘performed duties as ship’s doctor’. I don’t yet know if she was officially employed in that capacity – this is still on-going research.

SS Glenlogan
But she was definitely employed for her job on the Glenloganthat summer. She sailed from Scotland to Kobe, Yokohama and Hong Kong, leaving on July 10 1913. It was for just one return trip on the small, slow and old cargo ship.
'Heretofore it has not been considered that the steamship offers much scope for lady doctors' said the Telegraph, announcing the breakthrough. It was a major understatement, given the discrimination shipping companies then practised.
Females were welcomed as nurses, especially if they’d just sail at stewardesses’ (lower) pay rates. But doctors were always male.

How come the breakthrough?
So how did Dr Ross break that mould? First, a doctor was urgently needed . ‘A Glen line ship taking emigrants to Australia was waiting at the Tail of the Bank, [Upper Clyde) but the Board of Trade official couldn't allow the ship to sail because there was no surgeon aboard,' reported the Telegraph.
Secondly, she was available and suitably qualified. Shipping companies liked their staff to be well-traveled, mature and highly competent. And officers loved interesting traveling companions to while away slow trips. She had great stories to tell of her time in what is now Iran as ‘the Chieftainness of a Persian Tribe’and doctor.

How did she sail?
Probably with great confidence, because of her context. She’d benefited from studying medicine at Queen Margaret College, the first women-only higher education institution in Scotland, a kind of equivalent of Girton. It was financed by Isabella Elder, the philanthropic wife of shipbuilder John Elder.

What was Dr Ross’s journey like?
We don’t know because her correspondence didn’t say much. According to her family, 'She loved it'. It was slow.
As she was on a cargo ship it was varied (the freight always affects the voyage eg hides were accompanied by fleas).
She was feted in foreign ports and seemingly she had concocted a suitable uniform, as women pioneers did.
Doctors anyway had a cabin to themselves. So there wouldn’t have been any awkwardness about where this extraordinary phenomenon – a woman officer - was to sleep.
Captain McGregor told a Hong Kong reporter that contrary to expectations his ‘distinguished lady doctor’ was highly regarded.
‘The Chinese crew on board the ship paid the doctor the greatest respect. Of course, Dr. Ross speaks Persian like a native, and it was a revelation to many on board to see the cordial manner in which Persians at Penang and Singapore greeted her and incited her ashore.’

Did this first women ship’s doctor set a precedent?
Oddly not. A few women doctors were on ships in wartime but only en route to postings, such as Salonika in WW1, or as passengers. They gave medical care when needed but were not ship’s doctors, as such, until the 1950s.
The new post-1950s wave mainly got their opportunities because schools cruises were becoming popular. Women doctors were seen as suited to working with children, because they were less intimidating, more like absent mothers.

More information
I’m writing about Dr Ross and her successors for my new History Press book on women working at sea over the last 250 years.
You can read more about Dr Ross’s impressive life at www.tainmuseum.org.uk/dr._elizabeth_ross_g.asp?page=151‎.
I am indebted to the Ross family, Morag Bremner and Margaret Urquhart at Tain Museum, and Louise Miller for their generous help.