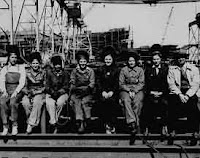 Fictional Rosie the Riveter and her real metal-working mates built iron ships in WW2 (see pic right). At least a quarter of 90,000 workers at the Kaiser shipyard in California were women, many African-American. Women also welded in British and German shipyards in the 1940s.
And today young female mechanical engineers say they are experiencing no barriers at Clydeside shipyards. That includes two apprentices building aircraft carriers at the Scotstoun Shipyard in Glasgow for BVT Surface Fleet. Elaine Hislop is shortlisted for Young Woman Apprentice of the Year and Laura Campbell is shortlisted for the Young Female Engineer of the Year award.
Elaine told the Daily Record ' If I'm out on a Friday night and I meet someone and tell them what I do, I always get a gasp. They can't understand I can be an apprentice and a girl, but there are more women coming into the industry now, and I can see things changing....Females are not as unusual a sight these days, and as a result, I don't get as many people staring at me.' http://www.dailyrecord.co.uk/news/editors-choice/2009/03/31/women-workers-join-in-the-shipyard-boom-86908-21241992/
You can see videos of women shipbuilders talking about their careers now, for example: http://www.futureshipshape.com/people-like-you/case-studies/barbara-mcintyre.html
But in 250 years ago, in 1759, it was unthinkable that a woman should be a ship builder, doing highly skilled labour on wooden vessels. Yet at least one woman did - even though she had to dress as a man to do so. Her autobiography has just been reprinted, with an introduction by Margarette Lincoln (see pic above, left).
Mary Lacy, aka William Chandler (1740-1798) went to sea as a carpenter’s apprentice from 1759-62. Then she became a shipwright apprentice in 1763-70, which often entailed her working and lodging on ships.
In a review I write that this introduction points out 'that Lacy was unusual in three ways: a member of the armed forces; a time-served shipwright; and a speculative house builder.'
The book may not have much to say about how a woman viewed the construction of keels and cabins, and the wielding of drawing pens and hammers. But on the social side it's fascinating. It 'shows how a helpful young, seemingly-male, catering servant on a warship relates to all the petty officers’ wives, "sailors’ companions" and bumboat women who come aboard. "He" is laundered for, gossiped about/with, shopped with, petted and, of course, propositioned.'
In her personal life, Mary Lacy certainly dated women 'as a smokescreen'. She may have 'married' Elizabeth Slade, with whom she lived for 18 years and whose surname she appropriated
See Mary Lacy: The Female Shipwright, Caird Library Reprints, National Maritime Museum, London, 2008.
My review of it will appear in the International Journal of Maritime History, in late 2009.
Posted by Dr Jo Stanley, FRHistS. at 05:59