Nurses at sea in Falklands War 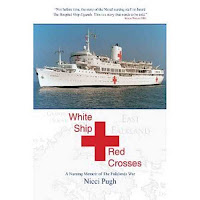 White Ship Red Crosses, by QARNNS nurse Nicci Pugh, has just been published. The memoir summarises the experiences of Queen Alexandra's Royal Naval Nursing Service personnel on the hospital ship Uganda during the 1982 Falklands conflict. It is published by Melrose Books, ISBN: 978-1907040498

Anna McNamee, for Women's Hour, recorded the book's launch party this week (20.4.2010). The lively programme included interviews with the some of the 'Fearless Forty' nurses. Hear it on BBC Radio Four's Listen Again facility: http://www.bbc.co.uk/programmes/b00rzt98#p007g4yz.

It's great that the book is out and that this story is at last told. I am happy I was one of the people who encouraged Nicci to do it.

And it's important to acknowledge that nurses were not the only women in that war. So too were pursers, stewardesses, laundresses and cleaners. These unsung heroines, some of whom I have interviewed, also deserve recognition.
Posted by Dr Jo Stanley, FRHistS. at 08:33