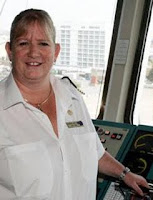 Captain Breton lives on the Essex Coast and when on leave spends her time in the garden, sailing - whenever the weather permits, and watching Six Nations rugby and Formula One motor racing.'
Posted by Dr Jo Stanley, FRHistS. at 05:58