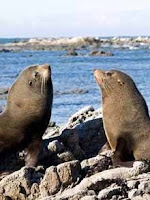 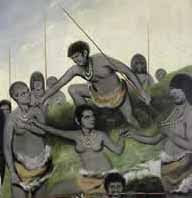 Who says women didn't travel much, or far? You can hear the story of a fascinating Tasmanian sealer woman, Woretemoeteyenner, on ABC radio. Based on London lay preacher George Augustus Robinson's 1830 findings, the article tells of a culture where Aboriginal women were sold to sealers, for sex, and where t was women's job to deal with the sea's resources, such as seals.

In The tale of a sealer woman: Woretemoeteyenner Carol Raabus writes about Greg Lehman's broadcast.
'Woretemoeteyenner... may have been given to the sealer George Briggs by her father, perhaps as an attempt by Manalargenna [her father] to make a peaceful connection between Aboriginal people and white men.

'Woretemoeteyenner went to live with George Briggs in 1810 and the pair had five children.Woretemoeteyenner was part of a sealing party on a long-range trip, starting in Western Australia before setting sail for St Paul's Island in 1825...

'The captain ... decided to drop off Woretemoeteyenner, the other Aboriginal women and one sealer .... on the Island of Rodrigues.'Woretemoeteyenner waited for about seven months for the ship to return before making her way.... to Mauritius.

'Woretemoeteyenner lived on Mauritius until the Mauritian administrators petitioned the Governor of New South Wales in 1827 to pay for the return of the remaining Aboriginal women to Australia. Three women and one child made it back to Sydney, more than three years after they first set sail.

In 1841 Woretemoeteyenner's daughter Dolly petitioned to have her mother released into her care. This meant that Woretemoeteyenner could finally live out her days with her grandchildren, no longer the possession of any man.'