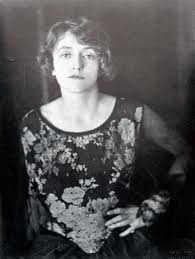 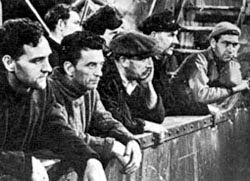 Woman journalist F Tennyson Jesse created what seems as if it could have been a new genre in writing about a Merchant naval vessel in WW2. The Saga of San Demetrio is about the crew as much as the ship. And it’s got a lyricism that is seldom present in the rare biographies of mariners. Unfortunately, her style wasn’t followed up by many other maritime writers.

I’ve long known that San Demetrio, London
(1943, Dir Charles Frend) was one of the acclaimed WW2 films. It’s unusual because it’s about the Merchant, not Royal, Navy. And it’s about very human people.

But I’d never realised until this week that there was a book of the film. And that it was by a woman. And that it was by the woman who wrote what I think is the very best book about women in WW1. Jesse’s writing style is exceptional for both its realness and its accessibility (critics would say ‘chattiness’).

F Tennyson Jesse went to the Front in France (briefly) in WW1 and wrote about the women there, in The Sword of Deborah, 1918.

I read it last week at the British Library in Boston Spa. It’s my favourite book about women in that war – because it’s so real. It feels like the first time I’ve got a sense of the reality of the lives of those WAACs and VADs, drivers and spud-peelers, clerks and nurses, making their huts cheery with chintz and buttercups, tolerating unequal pay and food.

It’s a pity she didn’t wrote about the ferry trip across the Channel (which was why I was reading it, in search of stories of what women writers and journalists made of the voyage, for that chapter in my forthcoming book on women on the wartime seas).

But the bonus is that through Jesse I discovered a new writer to me, Susannah Clapp. In the London Review of Books Clapp wrote a truly impressive critique review of Jesse’s biography. A Portrait of Fryn: A Biography of F. Tennyson Jesse by Joanna Colenbrander, Deutsch, 1984. You can read the review at http://www.lrb.co.uk/v06/n10/susannah-clapp/you-are-my-hearts-delight

My copy of The Saga of San Demetrio has just arrived in the post from Amazon. It looks like it’s been through a war. Printed by HMSO in 1942 it's an endearingly impoverished-looking waif. Skinny with a maroon and foxed cream cover, the pamphlet has a coffee cup stain on the front. Every page edge is as crisp as toasted popcorn, and as battered as if it's been shoved in a thousand pockets.

Within its pages, Jesse’s writing isn’t as sparkling as her WW1 style. After all, she was 53 and not the merry gadabout of 28 she presents herself as being in The Sword of Deborah. As her biography shows, love, work and life in between wars had challenged her.

But it’s still such a good and early description of the tanker that in November 1940 carried 12,000 tonnes of aviation fuel from Galveston in the Jervis Bay convoy. The tanker was attacked by German pocket battleship Admiral Scheer, and cuaght fire, forcing the crew to take to the lifeboats and face terrible ordeals.

I checked to see if Jesse had been allowed to write the screenplay. Yes, she had. And she’s listed third in the list of its writers, after Robert Hamer and Charles Frend. That position may refer to the actual size of her contribution to the writing. My hunch is that mainly it reflects the credit (sparse) that women were formally given.

One of the modern reviews praises the movie ‘because it tells of ordinary people getting on with the job that, due to a world war, has to be done. These are modest heroes. Problems that come their way are solved unfussily. No one expects medals, they just get on with it…. You feel these are real people, not just actors.’ (Henry Girling on http://www.imdb.com/title/tt0039797)

I like to think that’s Jesse’s doing, because that’s the clear strength of her book – it’s about ordinary people. It makes their experience real to us.
Posted by Dr Jo Stanley, FRHistS. at 01:20