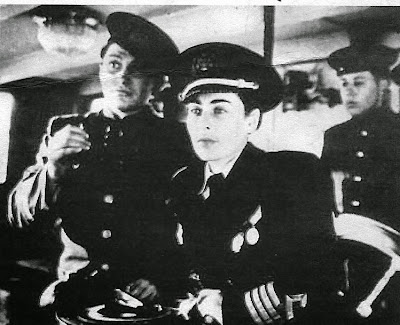 Pic: Valentina Orlikova and colleagues on the bridge of WW2 merchant ship

In surfing yet again for women seafarers’ history in different countries I realised that a new researcher doing the same thing,looking for Soviet women at sea, could easily be under a big misapprehension.
The prominence on the internet of Soviet pioneers Anna Shchetinina and Valentina Orlikova might lead people to think they were exceptions, like Victoria Drummond.(This British marine engineer pictured below was, like them, breaking through in the 1930s.) 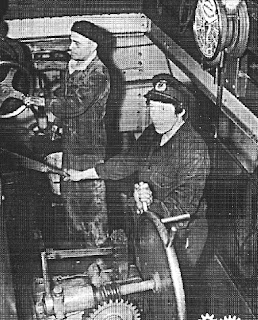 In fact, Captains Valentina and Anna were two of many thousands of Soviet women in the merchant navy from the 1930s who did ‘men's' jobs: deck, engineering and radio work, rather than hotel-side work.
~ Anna Shchetinina (1908-1999) certainly was the first woman in the world to serve as a certificated captain of an ocean-going vessel. (see pics below, and many other images on the excellent Russian-language website about Anna: http://ljwanderer.livejournal.com/150094.html)

~ And Valentina Orlikova(1915-1991), with her movie-star looks, certainly was the most internationally-fancied woman deck officer in the world. Her high profile was created after she was featured in a USSR/ New York publicity drive in 1943.
But evidence of the mass of women is hard to find, even for Russian speakers. Use the search term 'women sailors' on the RIA Novosti press agency site and there’s just an implausibly smiling woman cleaning up a nuclear ship in 1964, and a young woman on Far East service, who looks rather planted.

A much-admired media icon
By contrast to the now-invisibility of the mass of Soviet women merchant seafarers, the Milwaukee Journal of February 28 1943 headlined an article ‘Pretty little Soviet girl is officer on cargo ship.’

And the Illinois Alton Evening Telegraph celebrated Valentina:
‘Any preconceived pictures you have of Soviet women as tall husky Amazons will have to be revised for Orlikova. She is four feet ten. Gray eyes. Brown hair. Slender little figure in a dark blue suit. She is the wife of a Soviet seaman and the mother of a two year-old boy.
‘In stormy weather or calm seas she stands her watch on the bridge, helping direct navigation through mine-sown and submarine-infested waters. She has directed the evacuation of a ship truck by a mine and has leapt from a flaming vessel into the sea, o be rescued by a submarine. And she talks about it more calmly than most people discuss rationed hoes.’
US writer Anais Nin wrote:
<'A photo of her had appeared, which all of us fell in love with... She conveyed firmness and capability, without hardness or coldness. She became a symbol of woman’s most secret wishes: to be free and in command of her own destiny, responsible without loss of her womanliness. 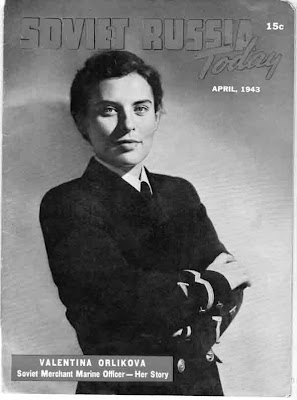 'We wanted to imitate Valentina Orlikova. We saw ourselves trim, efficient, capable captains of our ship and our own lives. It was not a desire to be a man, but be free and capable of self-direction and professional growth.’ And Nin cross-dressed in her husband’s tuxedo and cut her hair short, in emulation.
So wartime needs for women’s labour, and new temporary alliances of Allied powers, were helped by her not being fitting the burly Russian Bear stereotype. The message was that you could be cute AND a tough worker and a married Mom - and someone from the land of Communism. 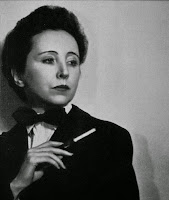 Realities
The reality was that Valentina Orlikova was a dual-ticketed engineer and deck officer, aged 28. And one of thousands of women who were in the USSR merchant fleet long before the war started.
The socialist revolution gave many rights to women, including doctors and scientists, which were astonishing in other countries. By 1933 British economist Sidney Webb had recorded that there was ‘a steadily increasing number’ of women sailors, engineers and wireless operators, usually dressed in trousers. They went to marine training schools along with men.
When they docked in foreign ports the women were seen as novelties and featured in the press.
For example when the Chelyuskinet arrived in New York with exhibits from the Soviet Pavilion at the Worlds Fair in February 1939, the women officers along with what we could call ‘stewardesses’ were pictured by a news agency(see picture below.) 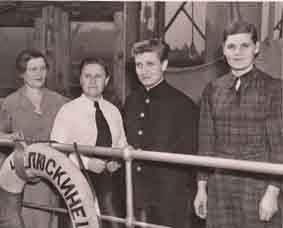 
Wartime
The Soviet defensive navy had the same trouble as most defensive navies in letting women sail in this all-male organisation in WW2. (Finally the USSR did. Britain didn’t, except very exceptionally. And the Canadian navy rejected women radio officers, who instead joined the Scandinavian merchant vessels)
According to historians Markwick and Cardona, 21,000 women worked in the USSR's defensive navy. Some rose as high as captains in the Amur River Fleet, sailing on the relatively safe Amur and Sungari rivers. Those on the Astrakhan, carrying and ammunition, troops, wounded people, and supplies, were much decorated. In the Black Sea Fleet were 2,854 women.
Not all were seagoing and they faced misogyny. Captain Taisa Rudenko-Sheveleva, the first woman naval officer, who had got in by pretending to be a man, said cats and women were traditionally seen as unlucky.
By comparison, the intensively-trained professional seafarers Anna and Valentina were some of the long-accepted technical officers on merchant vessels routinely going deep-sea in dangerous waters, including the horrific Murmansk route.

~ Captain Anna was transporting cargo in the Baltic. She took part in the ‘Russian Dunkirk’, on one of the 190 ships of the Baltic Fleet evacuating people from Tallinn in August 1941. She was also sailing as master of a Liberty ship, transporting Lend-lease supplies from the US, and therefore at great risk of Axis attack.
~ Valentina was working as a mate on cargo ships, including as fourth mate on the armed Dvina, sailing from Archangel to New York in 1942 and 1943 delivering US arms to the USSR.
She’d been ‘serving as mate on hospital ship in the Baltic Sea … the Nazis sowed mines directly in our path. Our ship hit one of them. I shall never forget the terrible moments that followed – the explosions, the flames, the wounded all around needing help – and through it all the faces of my women comrades, strong and heroic…[the water rose, the ship listed]
‘I was on the upper deck, in charge of lowering lifeboats … Despite the frightful danger facing everyone on ship, my heart was calm. I saw there was no room here for weakness. All the women around me, young and old, nurses and crew members, were working quickly, efficiently, confidently….I did not see any of the women make even a gesture towards saving their own lives.’
The ship managed to get to a small island where the wounded were unloaded. The ship temporarily repaired so that it could limp to the home port and be properly repaired.
When ‘the wounded were re-embarked and the ship ready to sail again, I ordered the women to take some rest. With tired, but happy, smiles, they refused …noiselessly they glided through the cabin helping to bring back to health those who had been wounded,’ she told the US media. 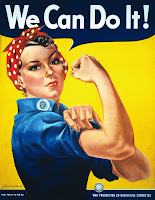 In typical ‘women can do it’ and Rosie the Riveter style, the Alton Evening Telegraph reported ‘Orlikova is the only woman mate on her ship. But she does not intend to stop there. Her ambition is to be a ship's captain. She thinks in three more years she should make it.
‘"It's good to have women on ships," she says. "They keep everything clean and in good condition. They are exact as doctors and radio operators, too. And they are not afraid of anything." Have any of Orlikova's order ever been questioned because she was a woman. "Never," she says with a grin.’ 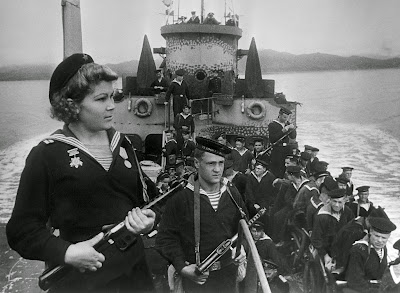 After the war
Both Anna and Valentina women survived the war, and were much decorated.

(Pictures from http://ljwanderer.livejournal.com/150094.html, with thanks)

~ Captain Orlikova worked on whalers sailing to the Far East from 1947-53. Under international law Russian-style factory whaling was illegal and controversial. She attained her dream to be captain, working on Storm.
Many women were on whalers in both 'male' roles such as scientists and radio officers, and in domestic roles such as cooks, and laundry. Valentina never got the same publicity again. 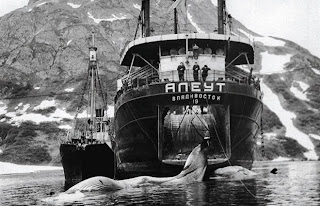 It’s rather peculiar that the progressive trend of women doing ‘men’s work’ at sea didn’t continue in the USSR. However though this 1960s photo of some Soviet women seafarers visiting Warsash Maritime Centre (now Academy) in Hampshire, indicates they not only existed but traveled. In the 1980s there was at least one woman, Valentina Plutova, a First Officer.


Yet when Nina Baker, Britain’s second women deck officer, sailed to the USSR in the 1970s Soviet officers (male) deliberately visited her ship to see this phenomenon: a woman on the bridge.
(This blog entry is part of a longer article to be published elsewhere, later. Suggestions for additions are welcome.)

Indeed, when I visited Novorossiysk in about 1978, not only did local dock officials think me an unusual feature as a woman deck officer, when we were taken on a guided tour of the town, we were taken to the local maritime training college and I specifically asked about women in the USSR merchant navy, thinking that some women who had sailed in the wartime might now be professors there.
Interestingly, the people at the college said that they were not aware of any women in the soviet merchant navy at that time and thought that all the well publicised ones of earlier decades had retired and the gendered segregation of occupations had become more like that in the West, as the old revolutionary ideals had faded somewhat.
Interesting to see how many there were in the mid-20th century. I know that the former soviet countries do now have women in the officer roles as there are numerous images online of them training in colleges.
nina baker