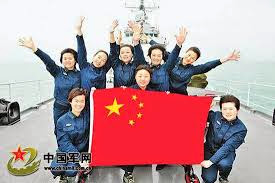 Since writing a few days ago about Soviet women sailors, this 2013 article about Chinese women seafarers has been drawn to my attention. I'm re-posting part of it here, plus the link (http://english.peopledaily.com.cn/90786/8133836.html)and some extra pictures.
(It's worth saying that earlier Chinese history women sailing on, and even commanding, 19C pirate vessels, and Sisters nursing on naval hospital ships in WW2. They don't seem to have been ordinary merchant seafarers as the post-1930s Soviet women were.)

"
Chronicle of events of Chinese female sailors on warships

● In 1991, a hospital ship of the South China Sea Fleet of the People's Liberation Army (PLA) Navy carrying 17 servicewomen made a round of visits to the Nansha Islands in South China Sea. This is the first time for the Chinese naval servicewomen to carry out tasks along with a ship.

● In 2010, 14 female soldiers were temporarily assigned to the combat duty posts of signal, radar, steering and boatswain of the Chinese naval escort ships in the Gulf of Aden.

● In September 2012, the PLA Navy attempted to expand the service scope of female soldiers in surface ship units, and gradually established and improved the system and measures for organization and equipment, education and training, and management and support of female soldiers."
-- 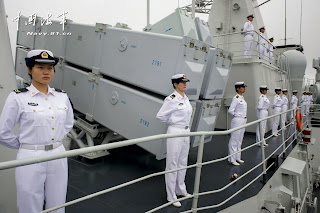 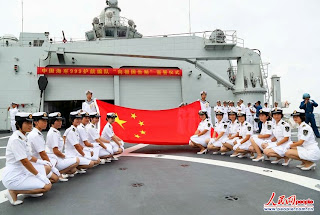 "Female sailors of Chinese Navy participate in escort mission in Gulf of Aden
(People's Daily Online November 05, 2013).Female sailors of the 'Jinggangshan' ship under the escort taskforce of the Navy of the Chinese People's Liberation Army (PLA) are holding combat positions in escort mission in Gulf of Aden.They have completed the training of common subjects, such as seamanship, damage control and battlefield rescue, and professional subjects, such as navigation, radio operation and signal."