Wet nursing on ships: sisterly support and a necessary business 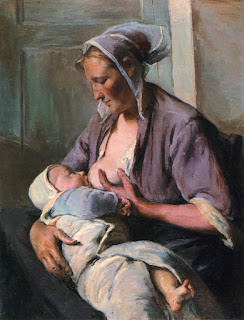 A hot topic today
Breast-feeding other women’s babies at sea. Where in maritime historiography are these lost stories of generosity, of life-saving, of sisterly support -- or, more practically, women’s private enterprise in a monopoly situation, the ship in mid-ocean?
Is it the general lack of work on travellers' emotions,including necessary trust, that means we don't we know much about situations of heightened mutual dependency at sea, apart from during the wrecking of ships and in lifeboats?
I'm thinking about those troubled intense times on voyages when people absolutely have to supplement for each other when (sea- or other) sickness hits. That includes seafarers generously covering each other's jobs when a shipmate is ill or distressed, or ships' passengers looking after the children of mothers too incapacitated to do anything? (This can be taken as a proof of the African adage that it takes a whole village to bring up a child). 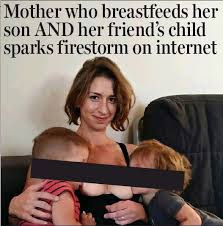 The question comes up because wet nursing is a hot topic in the UK this month. Today BBC Radio 4's Woman's Hour focused on wet nursing (http://www.bbc.co.uk/programmes/b007qlvb). Debate has been triggered because a picture of Jessica Anne Colletti (pictured above) breastfeeding her son and a friend’s child went viral. (http://www.express.co.uk/life-style/health/598028/What-is-wet-nursing-how-to-breastfeed-milk-bank-netmums).
Also a survey by Netmums, the website for mothers, last week found one in 25 British mothers are already wet nursing another's baby. Two in five women said they would do so.

Wet nursing at sea in the past
On ships this intimate supplementing happened too. However, the extent is not known because the subject, like menstruation at sea, has been regarded as not quite seemly.
Passengers' letters and diaries certainly make clear that some women on ships helped each other, with child care and especially when ill.
But there's little detail about the physical realities and emotions, so we can only speculate on the meanings of these intimate exchanges.
*
How far did that help extend? It’s partly dictated by the weather.
Wet nursing and seasickness are crucially linked because if nursing mothers suffer badly from mal-de-mer they become dehydrated and eventually stop lactating. At least one in ten people suffer from seasickness, and effective remedies were rare before the 1940s.
No-one would stand by and let a baby die of starvation. Of course shipmates who had copious enough milk would have stepped in. Peer pressure might have propelled them, too, if the child was so very distressed that the crying disturbed the whole ship.
Class relations and custom meant that the family of an elite mother would think it quite normal to send down to steerage for a labouring-class woman to do this job. 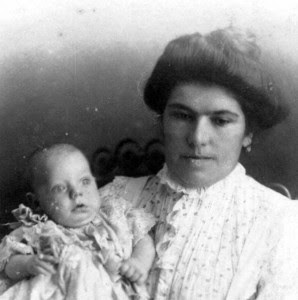 Wet nurse saves Manuel Lagos Besteiro’s life
In 1912 when Pepita Lagos Besteiro was returning to Havana from Madrid with her husband and baby Manolo, the six-month-old became so sick that the ship's surgeon pronounced that he would probably not survive the voyage.
But a willing wet nurse was found on board. And, says the family’s website, this unnamed woman (pictured with Manolo) successfully suckled Manolo back to health, ’to the point where it was noted that he had a ruddy complexion by the time the boat arrived in Cuba.’(http://www.emilito.org/family/emilito/lagos_us1/index.html)

Different ships, same needy babies
Without doubt other nursing mothers fed their shipmates’ babies too, on:
~ convict ships in the 1700s
~ migrant ships in the 1800s and 1900s
~ floating nurseries, post-war bride ships in WW1 and WW2 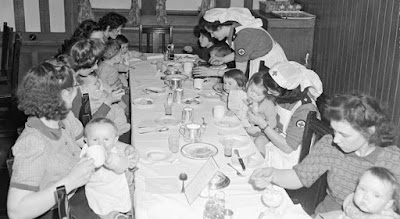 After world war one, women on bride ships were in a particularly intense mothering situation, which could become a health-care crisis. Mothers of babies and children were traveling to the homes of their new servicemen husbands, on troop-ships unsuited for this new purpose.
On some WW2 brideships nursing mothers were much more officially controlled by the military than in WW1, partly to avoid epidemics of infection. On Canadian ships infants' mothers were made to switch to using formula milk - which of course caused stress. It was a hard situation for both babies and mothers to adjust to.
At least one in ten people are seasick. So on choppy voyages to the Antipodes and South Africa warbrides, and later Ten Pound Poms, would surely have assisted each other in providing breast milk.

Wet nursing at sea: the meanings
Historian Christina Hardyment, on Woman’s Hour, differentiated between two sorts of wet nursing arrangements on land:
~ between friends or family, when it was done out of kindness and concern
~ paid relationships, which would have meant both that an obliging woman was found, and employed on a casual basis, or that the passenger took her wet nurse with her

**
Wet nurse Margaret MacIwain (probably a mis-spelling), aged 26, sailed on the Manhattan from Liverpool to New York in September 1857. If she was lactating at that point she would have helped any needy baby -- for money, or at least for a grateful gift.
However, if she was sailing with a family by whom she was already engaged as a wet nurse, then she might not have been able to be generous. This would be especially true if she had a small supply of milk, perhaps because she was already feeding more than one greedy baby, or because she was too poorly. 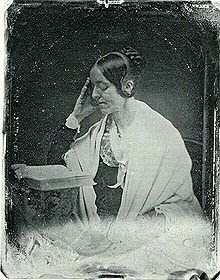 **
Feminist journalist Margaret Fuller (1810-1850), by contrast, prepared for her voyage from Italy home to New York by weaning her son in spring 1850. Angelino had been born in early September 1848, so he was nineteen months old.
Margaret and her revolutionary marquis partner couldn't afford to pay for his 'great stout Roman mother of the flesh’, the wet nurse, to accompany them, even if the woman had been willing. Nino had to learn, in two months, how to do without the breast.
On the three-masted sail ship Elizabeth, Nino got his milk from the nanny goat. The five-week voyage ended fatally for them all when the ship foundered, and sank, says Margaret Fuller’s biographer Megan Marshall. 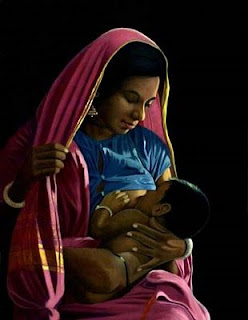 Conclusion
Voyages can often be very bonding experiences enriched by intense but fleeting friendships. Comradeship and the suspension of xenophobia are the most fascinating aspects of this heterotopic off-shore place.
For me it's rather a moving idea that not only did some people step off at the other side with new friends for life (which was particularly the case with WW2 bride ships). Children also left a ship with milk-kin, 'sisters and brothers' bonded by the shared breast.
The lost history of wet nursing at sea would be invaluable in helping us understand how gendered power relations were changed in these peculiar floating hotel and boarding houses so far from land.
**
My questions, which will probably never be answered, are:
~ how did this once-acceptable practice of hiring a wet nurse worked at sea when family were white and the wet nurse was a Chinese amah or Indian ayah. Did she have to feed the baby in private, to avoid onlookers’ racist distaste? Was she allowed to take her own baby?
~ Wet nurses' successful production of milk would have been crucial to their value on the voyage. Did their luggage include herbs to help promote copious milk production?
~ When late-nineteenth-century shipping companies advertised that their passenger ships carried a cow, was this a recognition that taking a wet nurse was something fewer people could now afford? Were children weaned early if they were involved in migration?