Trafficked women die at sea: females over 5 times more at risk than males 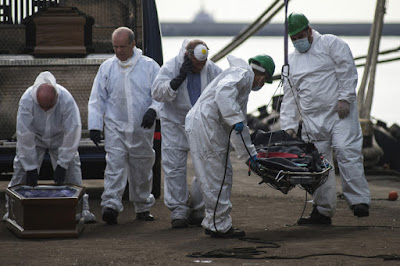 (The corpse of a migrating person is retrieved from rescue ship Cantabria, Salerno, on Sunday. Getty image)

Reports are just coming in that 26 corpses of Nigerian and sub-Saharan women were retrieved from the Mediterranean at the weekend.
Presumably economic migrants seeking entry to Europe, the dead were aged only 14 to 18. Mass murder is suspected.
A “seemingly endless line of black plastic body bags” , said Agence France-Presse, was landed by the Spanish ship Cantabria when it arrived in Salerno, southern Italy, after a rescue operation that brought in 400 people.
The deceased young women had been among the 64 people on the boat travelling to southern Italy from Warshefana, near Tripoli, when rough weather caused the boat to capsize.
Some of those still living were found in the sea, clinging to the sides of a partly-sunk rubber dinghy. 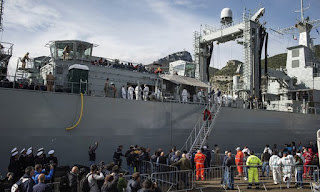 Yesterday, Tuesday, the autopsies were due to begin. The young women were going to be examined to see if they were poisoned and/or raped before they died.

When women are trafficked – not for sex, but just because they want to escape their country – they are five or six times more at risk of dying on their escape boats than are men.
In this case, the dead young women were 40 per cent of those aboard (the total female to male ratio is not yet revealed).

The Guardian reports that Marco Rotunno, spokesperson for the UN refugee agency (UNHCR), said 90% of migrant women arrive with bruises and other signs of violence.
“It’s very rare to find a woman who hasn’t been abused, only in exceptional cases, maybe when they are travelling with their husband. But also women travelling alone with their children have been abused.” https://www.theguardian.com/world/2017/nov/07/italy-investigating-deaths-of-nigerian-women-thought-to-have-been-murdered

The reasons why women are so additionally mistreated vary a little according to culture and situations. But from my studies of secondary sources explanations would appear to include:
1. women are regarded as lesser and therefore more disposable
2. women usually have less economic power to bribe their way out of trouble
3. women tend to have been socialised to be less assertive about their rights
4. women may also be less physically strong and have had less experience in fighting off male assailants. (Childhood play fights are useful training but are usually only sanctioned between boys, not girls versus boys).
5. mothers are hampered by being with children they are protecting
6. advanced pregnancy – and miscarrying en route – makes women less physically able to withstand attack or hardship, or simple y to fight for a fair share of scarce food and water
7. murder sometimes follows rape, or even after sex as a bribe. It’s a way to ensure silence. Because those with power in the escape progress (such as boat captains) are invariably male, so the rape victims are usually females.

How can this danger at sea, this horrifically gendered aggression, still be allowed to happen?

A report in Monday's Vanguard, the Nigerian newspaper with the motto ‘Towards a better life for the People’, gave the details:
“The bodies of 26 women were unloaded in a procession of black bags on to the dock of Salerno. The deceased women, believed to be Nigerian in origin, were recovered by the Spanish ship Cantabria as part of operation Sophia, an EU anti-trafficking force. Most of the women, aged in large part between 14 and 18, were drowned when the rubber boat carrying 64 sank on Friday while crossing the Mediterranean.
“The other three victims were collected as part of other operations and transferred the Cantabria as it headed to Salerno to turn over the bodies to the Italian authorities. 375 rescued migrants were also brought to Salerno, originating from sub-Saharan Africa, Gambia, Ghana, Libya, Nigeria, Sudan, and Senegal: 90 of them women, eight of them pregnant; and 54, children.

SEXUAL VIOLENCE ON BOARD?

“An investigation into the deaths of the women has been launched by Salerno prosecutors who believe there is a possibility that sexual violence played a role in the death of these women. Public prosecutor Luca Masini has arranged the external examination of the bodies with emphasises on toxicology and evidence of rape.
“The bodies were frozen onboard the Cantabria in order to preserve evidence that may have been lost during the journey to the coast. Full autopsies are expected to be completed at the Salerno morgue within the week.
“Police have detained 7 people for questioning including two men of Libyan and Egyptian origin who are believed to be the captains of the vessel.

SEX SLAVES WOULD BE BETTER PROTECTED

“Salerno’s prefect Salvatore Malfi has expressed doubts that the women were being trafficked into sex slavery, as he said “the sex trafficking routes are different. Loading women onto a boat is too risky. The traffickers would not do it as they could lose all their ‘goods, ‘as they describe them, in one fell swoop.”
“While women are statistically at more risk during this kind of migration, it is far beyond the 5 to 6 death rate of men to women crossing the Mediterranean. Read more at: https://www.vanguardngr.com/2017/11/26-nigerian-women-die-mediterranean-sea/”

People wanting to cross that telling bridge from Africa to Europe know the shortest distance by sea is across the Straits of Gibraltar from Point Oliveros to Point Cirse: 8.6 miles(14 km). (A road bridge is being planned.)
‘Illegal’ migrants from southern Africa usually travel via Libya, much further east. Italy has 4,000 mile of coastline and the north-east tip of Tunisia to the west of Sicily, Marsala, near Trapani, is only 325 miles ( 284 km) as the crow flies.
But it’s never that simple, because of sea conditions, and lack of easy places for covert embarkation and disembarkation.
‘Bonafide’ people travelling that route may take ferries from Tunis to Palermo, in north west Sicily. The ten-twelve hour voyage on these large and powerful vessels costs 110 euros in the cheapest period (February).
By contrast, travelling illegally in a rubber dinghy with an inboard motor costs whatever the traffickers can get.
Speeds on a dinghy with a 15 horsepower engine vary between 15-20 miles per hour, but being heavily-laden slows them down. With just two or three people aboard such a boat voyage would take at least 16 hours. These people could have been at sea for several days.
Survivors are just starting to give evidence.