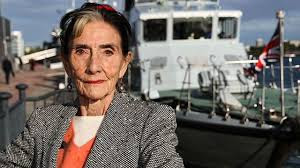 Integrating women into the navy and sea service in 1990-93 was controversial. Veteran Wrens, as well as some die-hard chaps, thought it would never work. Some still do.
They regret that femininity 'doesn't seem to matter any more.'
June Brown (Dot Cotton in EastEnders) was one who thought that way, as today's BBC documentary, Women at war: 100 years of service, shows. Wartime Wren June is the star of this first episode, on women and the navy. https://www.bbc.co.uk/iplayer/episode/b09fflk4/women-at-war-100-years-of-service-series-1-1-june-brown
June was a cine-op Wren from 1944-46, projecting instructional films on survival at sea to naval men. She was one of perhaps 100,000 lady-like but excited personnel who 'assisted' the war effort by 'freeing a man for the fleet'.
Those wartime women's histories were evidenced by some of the Wren artefacts June was shown at the National Museum of the Royal Navy. They included the naval shoulder bags for which Wrens had lobbied, needing a place for their lipstick and cigarettes. (There were canvas bags issued, or leather if you could afford to pay). The famous black knee-length 'passion-killers' could, June commented, be worn as cycling shorts today. She also referred to the standard-issue brassieres were 'had a deep band, like an old ladies'', which 'we never wore'.

DISCOVERING GENDER IS NO LONGER AN ISSUE
Now, for this programme, June actually drove a naval vessel, as no woman did until the 1990s. Taking the wheel, well, made her realise she would have been capable of doing that then, as she told the cameras.
She met her successors, today's business-like naval women, on ships and during their training in firefighting.
An early WRNS air mechanic, Dorothy Runnicles, and June too, felt that servicewomen such as themselves had been pioneers then. They saw WW2 Wrens as having paved the way for the 1990s trail-blazers, and then for the women today who take diversity and inclusion totally for granted. 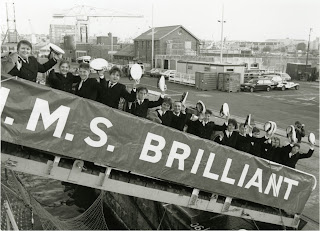 June also interviewed Kate Welch, one of the Wrens to join the first ship that included women as proper sailors. HMS Brilliant sailed in 1990, and Kate said, the 20 women on board were very usefully trained in advance in sea operations.
Any grumpy male doubters were glared at - and handled well by the women who, Kate says, 'were there as sailors in our own right, doing our jobs.'
June's many experiences in making this brisk and well-researched 43-minute film resulted in her starting to see naval integration very differently, as something that worked for today's young women.
I would have pushed it, had I been her interviewer. I would have asked 'So, June, do you now think that treating women as members of a special species might have been a mistake? Do you think it might have been limiting to you all, personally, as well as a waste of potentially useful hands in a wartime crisis?'
I get the impression that, reluctantly, she would have said yes.


TV VERSION OF NAVAL WOMEN'S HISTORY
TV and film can say things more directly, and with more impact, than books. I wish I had the chance to make a documentary instead of writing a printed volume (although finding the many pictures for it was definitely my favorite part).
But as it is, I feel deeply impressed by this BBC version of women's naval history. The programme was made with the real depth of understanding, and done very succintly and tellingly.
It's a far better brief visual story than my book, Women and the Royal Navy, which is out this week (https://tinyurl.com/y7pclcld). A book has the advantage of being permanent. And my summary provides a longer fuller view of woman in all naval services, not only Wrens as in this programme.
But I really take my hat off to the programme makers. Do watch. It's available on i-player until 5 December.