A barely-known Jamaican-British woman, Penelope Steel (and her 'freed Negro' mother) are behind the early survival of the Navy List, the Royal Navy's 'bible' or directory.
Today if you want to know about the navy you google or go online to "The Navy Directory",
https://tinyurl.com/navy-list-2018
The directory tells you the names of ships, offices, and officers. It's a sort of who's doing what, and where, and with what history.
When the navy was the biggest employer in Britain this list (then an almanac and trade directory too) was particularly invaluable.
From 1782 you would have 'surfed' by using that thick tome, Steel's Navy List, which came out every quarter.  (The 'Steel' was dropped in 1814.)
The Navy List's longevity is such that in the National Maritime Museum's Caird Library the back copies occupy over six bookcases.
Britain's other arms of the state had something similar: Crockford's Clerical Directory (from 1858) and Hart's Quarterly Army List (from 1839).

But what has slavery got to do with the publication of the Senior Service's directory, decades before that?


Jamaican roots
The answer is that a slave-owner's mixed-race daughter helped fund the publication - while also drawing maps and being a mother, not far from London's Tower Hill.
Penelope Winde was born in St Catherine's, Jamaica, in 1768.
She was one of several recognised 'natural' children of Kingston merchant Scudamore Winde, who 'owned' 70 enslaved people. Penelope's mother was Sarah Cox, who is listed as a 'freed negro or mulatto' (as historian Trevor Burnard has found.)
Her father died in 1775, leaving the equivalent of £7 million in today's money.  Penelope, aged nine, came to Britain with her brother. (She may have initially gone to her father's ancestral home in Kentchurch Court, Docklow, Herefordshire, pictured below today, http://www.kentchurchcourt.co.uk. Or to his business contacts in London.) 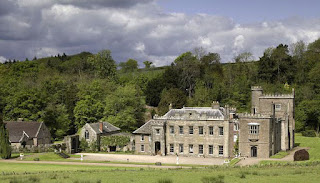 Somehow Penelope met barrister David Steel, the son of David Steel. David junior's family's business publishing charts was based at Navigation Warehouse, No 1 Union-Row, Little Tower-Hill, London.
They were married on May Day 1786 at St Botolph's, Aldgate (pictured), when she was about eighteen. 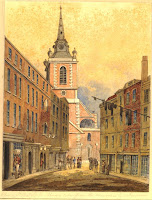 Their home and the family business were on the same premises. Her unmarried sister-in-law Elizabeth may have continued to run the home too.
That way Penelope may have managed to combine being the mother of five children with drawing maps and charts too.
Her maps included those of her home island, in a period of great naval activity in the West Indies against Frances, Spain and America.
he National Maritime Museum's examples of the charts and books published by her. See https://www.rmg.co.uk/discover/behind-the-scenes/blog/three-women-london-chart-trade-c1800-1860


Did David marry Penelope for her money? Possibly. But barristers are not usually poor. And maybe the business only began struggling when he took over after his father's death, thirteen years into the marriage.
Initially she did not have all that much, just her father's annuity of £60 per annum (c £9,300 in today's money). And three years later, when she was 21, she inherited £2,000, plus another £3,500  to come.
Anne M Powers has tracked Penelope down as far as she can. Anne comments that this inheritance 'is particularly interesting
'... under the 1761 Act of the Assembly illegitimate mixed-race Jamaicans were debarred from inheriting more than £2000.... I have not found any private Act permitting the Winde children to have more.'
http://aparcelofribbons.co.uk/2012/01/mixed-race-jamaicans-in-england/
But somehow Penelope's inheritance helped fund the Steel family's struggling enterprise.
For a full range of the business's publications see A Bibliography of the Works Written and Published by David Steel by Mario Witt, Greenwich Maritime Monographs, 1991.


A widow in maritime business

When Penelope's husband died after seventeen years, in 1803, his Will left her 'the option of either selling the business or, if she preferred, continuing to run it in her own right', writes Anne Powers.
Penelope, like so many widowed mothers in maritime London in that period, chose to work in the business. She was also drawing maps, which must have added to the income.

This is Penelope Winde Steel's timeline:


1768? Born Jamaica.
1775. Came to England, just four years after Nelson sailed to the Caribbean.
1786. Married into Steel family.  They carried on with the Navy List
1787. Son David Lee Steel was born
1789. Son Scudamore born
1791. Daughter Penelope Sarah born
1795. Daughter Mary born and dies two years later.
1797. Daughter Ann born
1799. Her father-in-law, David Steel, died.
1803. Her husband David Steel died. They carried on with the Navy List
1806. Penelope remarried, William Mason
1807. She had one child with William. Their son died as an infant.
1810. David Lee, and Scudamore, were no longer living at home. Her daughters Penelope Sarah and Ann were, and may have helped with the business and cartography too.
1814. The Navy List was no longer called 'Steel's'
1818. Penelope's son David Lee, died, seeming after a breakdown over his distress at losing out over his inheritance.
1821? JW Norie & Co took over the printing business. John W Norie had worked for William Heather, a similar nautical publishing firm.
1837 or 1840. Penelope died, quite well off, in Euston Place. The Navy List still continued.

For more details of what happened to the descendants, mainly in the US. See Anne M Powers.'A Family Saga and A Theatrical Disaster', http://aparcelofribbons.co.uk/2014/10/family-saga-theatrical-disaster/
As for Penelope's mother, Sarah Cox, we don't know if she stayed in Jamaica. If so, did she handle imported copies of the Navy List and her daughter's maps out there, perhaps even selling them to the British fleet in the West Indies?

Conclusion
Without the input of a BAME person, and profits from slavery, would there have been an uninterrupted flow of Navy Lists? Indeed would the navy have been able to function so efficiently, including in the Caribbean?

We can only wonder if, Thameside, racism and sexism affected how much Penelope was able to gain respect as an effective business woman and cartographer.

Certainly her son, Scudamore Winde Steel, (pictured right) rose high in the army and was knighted, despite being visibly mixed-race.