Celebrating Pride in Maritime Day, Tues Feb 28 2023. This year join in some wonderful opportunities to celebrate queer seafarers and their place in maritime heritage:

So why not try:

1. Seeing two European exhibitions on now till summer (both with English subtitles) 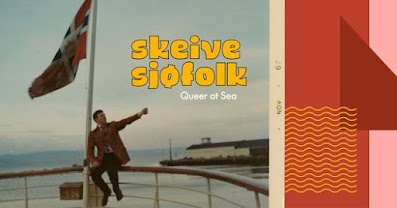 # Amsterdam Maritime Museum, Netherlands. As yet 'Queer Spaces at Sea. Queer culture on merchant ships 1950 -1980' is in its early stages.

Queer Spaces at Sea' is part of the wonderful new exhibition, Humans at Sea: https://lnkd.in/eDxTKH55.

It’s only the second year of its existence. Tuesday 28 Feb 2023. So let’s big it up. And join in the Diversity in Maritime UK discussion at https://bit.ly/PrideEvent28Feb2023.

3. Catching this info, in talks, posts and films throughout LGBT+ history month. I’ll be sharing stories about:

For a roundup including Canada's exhibition on gay seafarers see also https://hec.lrfoundation.org.uk/whats-on/stories/rainbow-sea-swelling