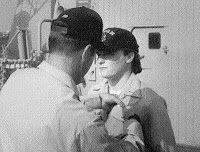 
Her point is so important. On a ship you're in a team. Witholding a key thing about yourself undermines your happiness, and it undermines the trust that's so crucial aboard. Of course LGBT people should be able to tell - and continue to do their job.
Posted by Dr Jo Stanley, FRHistS. at 00:41